A decent suspense thriller that could have been better. 3 Stars

Another enigmatic Patricia Highsmith novel brought to the screen, Andy Goddard’s A Kind of Murder works for about two-thirds of its length, falling apart near the end but filled with the shadowy people, motives, and unhappiness that mark all of the novelist’s most famous works.

Another enigmatic Patricia Highsmith novel brought to the screen, Andy Goddard’s A Kind of Murder works for about two-thirds of its length, falling apart near the end but filled with the shadowy people, motives, and unhappiness that mark all of the novelist’s most famous works. A Kind of Murder is infuriating because it doesn’t quite pull off its terrific exposition in the unfolding narrative, but for much of its length, it’s a fun ride with some nice surprises scattered along the way.

Successful architect/part-time mystery writer Walter Stackhouse (Patrick Wilson) is intrigued by an article clipped from a Newark newspaper concerning the mysterious, unsolved death of the wife of antique book shop owner Marty Kimmel (Eddie Marsan). Walter’s own marriage is tottering on the brink of divorce due to the mental unbalance of his wife Clara (Jessica Biel), and after he becomes infatuated with cabaret singer Ellie Briess (Haley Bennett), he’s more than ever interested in getting out of his marriage. When his wife Clara is found dead at the same spot as the death of Kimmel’s wife, dogged police detective Laurence Corby (Vincent Kartheiser) begins to suspect a link between the two men, a link that becomes even stronger when he starts piecing together various evidence that shows the men had previously met. Meanwhile, both men continue to protest their innocence.

Susan Boyd has adapted Patricia Highsmith’s 1954 novel The Blunderer resetting it in 1960 in New York but retaining the “two men/one of them innocent involved in nefarious undertakings” structure that so distinguished Highsmith’s Strangers on a Train and The Talented Mr. Ripley, both made into outstanding movies by master directors Alfred Hitchcock and Anthony Minghella. Boyd and her director Andy Goddard aren’t quite so masterful in keeping tension at a fever pitch and the plot constantly barreling precariously forward though the suspense is sustained for a reasonable length of time partially due to Boyd’s writing and Goddard’s use of informative montages at key moments late in the narrative (one reveals whether Walter and Ellie are really having an affair or if it’s merely a figment of Clara’s unbalanced mental state; the other reveals the killer of Kimmel’s wife). Goddard shoots key scenes at interesting angles sometimes amplifying dramatic perspective (Walter and Detective Corby’s foyer confrontation in his home is shot from his sunken den, for example), and he does a fine job representing the 1960s (other than a lack of people on the streets, Cincinnati makes a fine stand-in for New York City of the era). There is a climactic chase between antagonists filmed in the shadowy remains of a crumbling building after the film has run off the rails a bit, and the film’s tone turns unreasonably nihilistic, but it’s a pretty good ride up until then.

Patrick Wilson makes a fine protagonist, slightly arrogant and entitled and yet brought down by a string of ridiculously stupid decisions he makes that ever-more-deeply entwine him in the mess of the Kimmel investigation. As the mousy book salesman who continually protests his innocence, Eddie Marsan will remind you a bit of Raymond Burr’s jewelry salesman in Rear Window, hiding his natural accent and becoming increasingly reckless and unreasonable as the detectives close in on him. Vincent Kartheiser makes for a very cocky Detective Corby while Ian Short is reliably noncommittal as Walter’s best friend and associate Bill Ireton. Of the three primary women of the piece, two are portrayed rather shrewishly: Jessica Biel’s Clara and Kelly Mengelkoch’s Helen Kimmel though Biel does get lots more screen time to establish her character’s strong mental problems and irrational refusal to seek professional help. Haley Bennett as a jazz songstress gets to warble on a couple of occasions “I Can’t Escape from You” rather ironically but offers a somewhat uneven portrait of Ellie Briess in scenes away from her Greenwich Village jazz joint. Radek Lord has a couple of good moments as Kimmel’s shop boy Tony Ricco who offers the police the alibi which keeps Kimmel from being arrested.

The film’s 1.85:1 theatrical aspect ratio is faithfully delivered in 1080p resolution using the AVC codec. Filmed digitally, details are outstanding with the transfer’s excellent sharpness (your eyes will pop with some wonderful views of Walter’s exquisitely designed home), and color saturation levels are solid throughout with flesh tones that always ring true. Contrast has been expertly applied for a sterling picture, and black levels are appropriately deep. The movie has been divided into 12 chapters.

For a low budget affair, the DTS-HD Master Audio 5.1 sound mix is quite impressive. Music by Danny Bensi and Saunder Jurriaans gets threaded wonderfully through the fronts and rears, and directionalized voices are used quite atmospherically in a couple of places though most of the actual dialogue has been routed to the center channel. Nice pans through the soundstage also surprise on occasion.

The Psychological: Andy Goddard (10:39, HD): the director Andy Goddard explains the film’s plot and themes, and his work on the project is praised by actors Patrick Wilson, Jessica Biel, Vincent Kartheiser, and Eddie Marsan.

The ‘60s Look (5:07, HD): actors Patrick Wilson, Jessica Biel, Vincent Kartheiser, Haley Bennett, and Eddie Marsan praise the make-up, hair designs, and wardrobe that helped them instantly get into and stay in character.

The Noirish Characters of A Kind of Murder (14:33, HD): director Andy Goddard and actors Patrick Wilson, Jessica Biel, Vincent Kartheiser, Haley Bennett, and Eddie Marsan each talk about their characters and how their roles fit into the puzzle structure of the movie.

Promo Trailers (HD): In Order of Disappearance, Detour, Officer Downe, The Eyes of My Mother.

A modestly entertaining Patricia Highsmith suspense thriller comes to the screen in A Kind of Murder, excellently acted by a fine cast and given a good production on a limited budget. Fans of the original writer will want to see this adaptation of one of her novels even if it doesn’t quite measure up to the best of what has gone before. 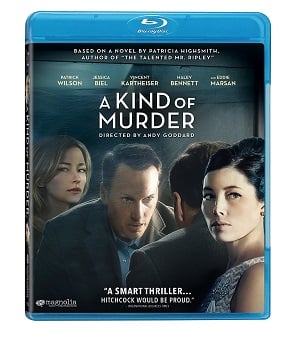