Peter Jackson, Fran Walsh, and Philippa Boyens(Return of the King) produced, and adapted for the screen, author Philip Reeve's Mortal Engines book series in a visually resplendent film that possibly loses some heart in the translation from the source material. 3 Stars

Peter Jackson, Fran Walsh, and Philippa Boyens(Return of the King) produced, and adapted for the screen, author Philip Reeve’s Mortal Engines book series in a visually resplendent film that possibly loses some heart in the translation from the source material.

“Sixty minutes is all it took for the ancients to bring humanity to the brink of extinction.”

So begins the film adaptation of the steampunk book series created by author Philip Reeve, in a post-apocalyptic future in which mobile cities search and destroy smaller settlements in efforts to sustain themselves.

Mortal Engines appears on 4K UHD in its original 2.39:1 screen aspect ratio.  The film is a visual feast of fine detail in 4K, with polychromatic hues that UHD is designed to deliver to the home theater.  Director Christian Rivers shows the influence of Peter Jackson with camera angles constantly in motion, and this eye candy is served extremely well in 4K.  This film would have really popped in 3D presentations in theaters, and Mortal Engines‘ presentation in 4K is excellent demonstration material.

Mortal Engines is presented by default in English Dolby Atmos.  The sound mix is exceptional, from the mechanical rumbles emanating through lower frequencies to the discreet directional audio of higher pitches.  The camera angles are always in motion in the film, and the audio is mixed to match the screen with excellent results.  The audio presentation exceeds expectations, even if the underlying film does not.  Weta Digital has created another fantastic world to astound the senses, and the audio is as immersive as one might hope for.

Special features on the 4K UHD disc include the following:

Welcome to London(26:22):  This short documentary of the making of the film is broken down into the following chapters, which may be selected individually or with a  “Play All” function:  “Building the Beast”, “Levels of London”, “The Smallest Details”, “London Museum”, and “Medusa and St. Paul’s.”
Feature length commentary by director Christian Rivers.
The blu-ray disc includes the special features stated above, as well as the following:
End of the Ancients(3:13):  This tongue-in-cheek featurette tells the history of the world of Mortal Engines.
Character Series(21:43):  The characters of Hester Shaw, Tom Natsworthy, Anna Fang, Thaddeus Valentine, and Shrike are highlighted with commentary from the cast and crew.
In The Air(4:52):  This featurette highlights the airborne cities of Mortal Engines.
Film New Zealand(3:52):  Cast and crew talk about producing the film in New Zealand.
Also included is a paper insert with a validation code for digital download of the film via the “Movies Anywhere” app.

Mortal Engines on 4K UHD is an epic translation of the steampunk book series that seems to lose something in the translation.  The video and audio presentations on 4K disc are a joy to behold.  The special features are recommended as they help to fill out the story in essential ways that the screenplay does not.  Fans of the book series will undoubtedly be delighted to see this fantasy world brought to life, but mileage may vary for viewers unfamiliar with the books.
https://www.amazon.com/Mortal-Engines-Blu-ray-Hugo-Weaving/dp/6317640173/ref=sr_1_3?crid=3CL26O9B6LX5W&keywords=mortal+engines+4k&qid=1552235885&s=gateway&sprefix=Mortal+Engines%2Caps%2C392&sr=8-3
Post Views: 4,217 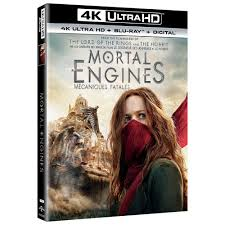