Posted on January 20, 2018 by Richard Gallagher
A fun film with a subtle message 4 Stars

Gidget, a somewhat more serious movie than one might expect, has come to Blu-ray from Twilight Time with a very nice transfer from Sony. Film historians seem to agree that it is the first Hollywood “beach film.”

Surfing is out of this world. You can’t imagine the thrill of the shooting the curl. It positively surpasses every living emotion I’ve ever had. – Gidget

When Gidget was released in theaters in 1959 I was just shy of my 12th birthday, when surfing and girls were not high on my list of priorities. By the time I was in high school and had seen a few beach movies I never got around to watching Gidget, in part because I mistakenly thought  that it was just more of the same.

In fact, Gidget is surprisingly relevant today, given the current national discussion about the status and treatment of women in the United States. Francie Lawrence (Sandra Dee) – soon to be dubbed “Gidget” – is a serious-minded 16-year-old (going on 17) whose girlfriends want to go “man hunting” at the beach. Francie unenthusiastically tags along  and watches her friends fail in their efforts to flirt with the surfer boys, who apparently are more interested in catching a wave than catching girls.

Among the surfers is their de facto leader, “Kahuna” (Cliff Robertson), a self-styled surfing bum who regales his pals with stories about traveling to beaches around the world. His protege is “Moondoggie” (James Darren), who has decided to defy his well-to-do parents by dropping out of college and following Kahuna. Familiar faces in minor roles include Doug McClure and Tom Laughlin.

Francie is tiny but feisty, and while she has little interest in the boys she is fascinated by the surfing and decides that she wants to try it. She manages to coax her father (Arthur O’Connell) out of enough money to buy her own surfboard. Her first venture into the surf goes badly and she has to be saved by Moondoggie, but the thrill of riding on his board serves to strengthen her resolve. Initially the boys are not impressed by Francie, although she does receive some encouragement from Kahuna, who is older than the rest. Eventually the boys are won over by her persistence and good nature, and they dub her with the nickname “Gidget,” a combination of “girl” and “midget.”

Gidget is cute as can be and has a bubbly personality, and the boys come to accept her as one of the gang as her surfing proficiency improves. Of interest is the fact that as she demonstrates her grit they treat her with genuine respect, and with the exception of one surfer trying to get a little familiar with her they keep their hands to themselves. However, as the summer progresses Gidget’s hormones start to kick in and she finds herself attracted to one of the boys, although his interest (or lack thereof) in her is unclear.

Sandra Dee had already appeared in a half-dozen films, but Gidget was her first leading role and she sparkles, delivering her sometimes rapid-fire lines with conviction. Cliff Robertson was 36 years old when Gidget was released, but he certainly looks the part of a well-tanned and muscled surfer. James Darren is fine as Moondoggie, a role that he reprised in Gidget Goes Hawaiian and Gidget Goes to Rome. Arthur O’Connell is amusing as the sometimes befuddled father of Gidget. The Four Lads, a popular singing group in the late fifties, show up to entertain at an implausible beach party. The film is directed by Paul Wendkos, who a year later made Because They’re Young for Columbia, starring Dick Clark, Doug McClure, and Tuesday Weld, with James Darren singing the theme song. Wendkos also directed the Gidget sequels (both sans Sandra Dee), which are pale imitations of the original.

I had always assumed that Gidget is just a fluff piece, but I am happy to report that it is more than that, as well as being fun and engaging.

The 2.35:1 1080p transfer is from Sony, which is synonymous with excellent. The film likely is as sharp as it was in theaters in 1959, with nary a speck of dirt or damage to interfere with your viewing pleasure. The cinematography is by Burnett Guffey, who won Academy Awards for his work on From Here to Eternity and Bonnie and Clyde. The beach scenes are enhanced by the location filming at Leo Carillo State Beach in Malibu.

For additional comments on this Blu-ray readers are invited to take a look at the words of our resident expert, Robert A. Harris.

A few words about…™ Gidget — in Blu-ray

The English 1.0 DTS HD-MA soundtrack is fine, it is likely that with a good audio system it sounds as well as it did in theaters back in the day. Every word is clear and understandable, and English SDH subtitles are available. It is worth noting that one of the original Four Lads was Glen Larson, who went on to be the creator and producer of many hit television shows.

The extras on this Blu-ray disc include the original theatrical trailer, an isolated music track, and a booklet with an enjoyable essay by Julie Kirgo.

Gidget is a fun film with a surprisingly strong (for its time) feminist message. Don’t be alarmed if you dislike messages in films, because it is subtle and does not club you over head. Sandra Lee is delightful and Cliff Robertson (an accomplished surfer in real life) is very convincing as the bare-chested Kahuna.

This Blu-ray has been released in a limited edition of 3000 copies, so readers who are interested in purchasing it should go the Twilight Time website or Screen Archives website and verify that copies are still available. 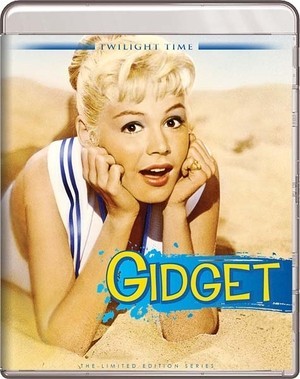