Posted on February 19, 2016 by Todd Erwin
A satisfying but derivative conclusion 3.5 Stars

The Second Mass, headed by Tom Mason and Dan Weaver, forge headfirst to do battle with the Espheni, once and for all, in the final season of TNT’s Falling Skies, which wraps up many of the storylines in a satisfying conclusion.

At the end of the fourth season of Falling Skies, Tom Mason (Noah Wyle) and his daughter Lexi were headed on a one-way trip to destroy the Espheni power core on the moon, finding himself in a dream state with his first wife. As the fifth (and final) season opens, Tom revisits an argument he once had with his first wife, but something isn’t quite right. When he realizes something is off, he awakens back on Earth in the Atlantic Ocean, a day’s journey from the Second Mass’s camp. On his way back to camp, Tom encounters a Skitter, killing it in a fit of rage. When he finally arrives home, he gives a lengthy speech to the troops and families of the Second Mass, revealing a decapitated Skitter head and calling everyone to “Find your warrior!” While many of the troops rally to the call, others, including his wife, Anne (Moon Bloodgood) don’t agree. This pretty much sets up the tone for this final season, as the Second Mass prepare for the final showdown with the Espheni. Since it was announced at the end of season four that this would be the last season, the creators and writers had the luxury of tying up most of the loose ends and resolve many of the plotlines over the course of ten episodes, such as the love triangle between Ben (Connor Jessup), Hal (Drew Roy), and Maggie (Sarah Carter), and the constant in-fighting between Tom and Pope (Colin Cunningham) over casualties and how the war is being fought which leads to Pope having a mental break and kidnapping Hal. We learn a bit more about Dan Weaver’s (Will Patton) backstory as he is reunited with Katie Marshall (Melora Hardin), who is commanding a troop of soldiers involved in a witch hunt in search of Espheni sympathizers rather than rallying with other militia groups to take down the enemy. When we finally arrive at the series finale and learn of the Espheni’s endgame, it feels like a bit of a letdown as it borrows quite heavily from James Cameron’s Aliens, complete with our heroes having to navigate around large pulsing eggs that are about to hatch in order to find the queen.

The pacing of each individual episode is handled well by its director, making the 43 minutes go by rather briskly, But it’s the pacing of the full season, overall, that occasionally gets bogged down in 2-3 episode story arcs that feel more like padding the finale out to ten episodes. Case in point is episodes seven and eight where the Second Mass find a functioning military base, are initially captured, then welcomed to assist, then eventually court martialled and placed in front of a firing squad. As interesting as this two-parter is with its Weaver backstory, the politics at the base, and the exploration of racism and discrimination among the troops, it brings the series to a halt as the plotline is worked through.

The 1080p transfer, compressed using the AVC codec, retains the 1.78:1 aspect ratio of the original broadcasts. This is a series set during apocalyptic times, leaning more towards blues and greys. Colors are consistent and not overly saturated, and contrast and black levels are decent, with deep blacks that rarely crush and whites that are never blown out. Detail is extremely good, allowing viewers to see the layers of filth and beard stubble on the human population, but also the grit and decay of the camp. Compression artifacts are non-existent, a major improvement over the cable and satellite broadcasts on TNT. Each disc contains five episodes.

The Dolby TrueHD 5.1 soundtrack gets a major improvement over the heavily compressed Dolby Digital 5.1 track used in the cable and satellite broadcasts, taking full advantage of the increased bandwidth and fidelity of the lossless Dolby TrueHD codec. The entire soundstage opens up nicely, with increased separation, better bass response, and what appears to be much more active surround channels (although, according to the sound designers, nothing is changed in the mix except the bit rate when the broadcast tracks are created). Dialogue remains intelligible and never gets lost in the mix, reproducing mostly out of the center channel.

Although the packaging boasts over 60 minutes of bonus material, much of that running time is taken up by the panel discussion, and there is much repetition between the short featurettes.

Cast Goodbyes (1080p; 1:06): Many of the cast members discuss wrapping up the show, using many of the same quotes as found on the Farewell to the Skies featurettes.

A Look Back (1080p; 2:31): Cast members discuss their favorite moments from the series, again recycling much of what was seen in the above featurettes.

Episode Guide: A four page insert that includes brief summaries of each episode.

UltraViolet Digital Copy: An insert is included with a redemption code and instructions on how to obtain UltraViolet digital copies of the fifth season.

All things must eventually come to an end, and Falling Skies is no exception after a successful five-year run on TNT as a summer series. Although some episodes feel like padding and the big showdown at the end is rather derivative, it is a satisfying end to a successful show. The video and audio are very good, but the special features are weak, and this being the final season, as a fan I had expected a bit more. 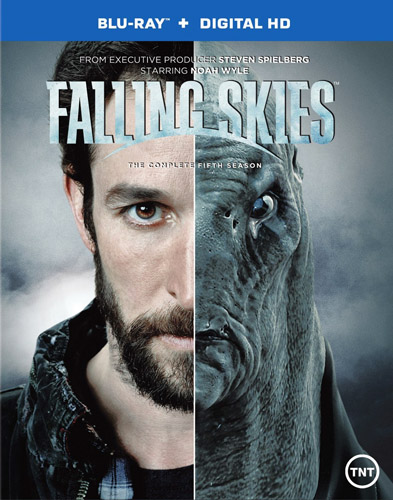