A Groundhog’s Day for the Young Adult generation with all the attendant meanness, angst, and sarcasm that quite naturally go along with it, Ry Russo-Young’s Before I Fall brings a worthwhile if expectedly familiar bittersweet message to its intended audience.

A Groundhog’s Day for the Young Adult generation with all the attendant meanness, angst, and sarcasm that quite naturally go along with it, Ry Russo-Young’s Before I Fall brings a worthwhile if expectedly familiar bittersweet message to its intended audience. That the story and its lessons are more serious in nature than Bill Murray’s mostly comic opus, the movie’s heart is in the right place even if its characters and situations are possibly a little too pat and pretentious.

Friday, February 12th is a big day in the life of high school senior Samantha Kingston (Zoey Deutch): it’s Cupid Day at school where students receive message-tagged roses from admirers, and Sam plans to follow that up with finally losing her virginity to her boy friend of a year Rob Cokran (Kian Lawley). Sam and her crew headed by Lindsay Edgecomb (Halston Sage) and including hangers-on Ally (Cynthy Wu) and Elody (Medalion Rahimi) pretty much rule the roost in high school, dictating who’s cool and who’s untouchable, the latter including butch classmate Anna (Liv Hewson) and tortured artist Juliet (Elena Kampouris). But coming home from an impromptu Valentine’s party given by Kent McFuller (Logan Miller), who’s had a secret crush on Sam for years, the four girl friends are involved in an accident, and Sam wakes up with it being February 12th all over again, a day repeated on an eternal time loop until she can figure out why she’s being tortured to relive this particular day in her life.

Based on the young adult novel by Lauren Oliver, Maria Maggenti’s screenplay forges a day for Sam filled with incidents and behaviors which could use some tinkering. The easy stuff to change seems pretty obvious: her indifference to her parents (Jennifer Beals, Nicholas Lea) and little sister Izzy (Erica Tremblay), the shallow meanness to fellow students and undeserved sarcasm directed to Kent who obviously cares for her, but there are fundamental changes to Sam’s inner psyche which require more than a few concerted tweaks (she tries a Goth Day where dressed in black she’s terrible to everyone just to get it out of her system), and those give the story its dramatic heft as we watch Sam begin to study herself and her fellow humans and begin to figure out ways in which she can put forth not just cosmetic changes but make instrumental adjustments to herself and those around her for the betterment of all. There will be some who will find the film’s denouement somewhat nihilistic and unfocused with Sam possibly not going far enough in her character adjustments to make a lasting impact, and the story might have had more oomph had the ending been different. Perhaps these questions were left for a sequel which is likely not going to happen given the movie’s unspectacular reception. Ry Russo-Young’s direction manages to keep those multiple variations on the same day lively and different enough to not become tedious.

Zoey Deutch does effect a noticeable change throughout the film emerging from Sam’s superficial “mean girl lite” persona to someone with a heart and soul that’s being put to observable use. Halston Sage does all the expected posturing as head honcho Lindsay with secrets that are hidden and behaviors that are less than admirable. Logan Miller as the love-struck Kent offers a fine performance of a character we’d like to have gotten to know better during the movie. Kian Lawley has the drunken, loutish Rob down pat, but Elena Kampouris’s tormented Juliet is another character who seems to have depths that the script never gets around to exploring apart from one revelatory scene in the woods.

The film’s 2.40:1 theatrical aspect ratio is faithfully delivered in a 1080p transfer using the AVC codec. Sharpness is very good throughout the movie though some may find other transfers with a bit more detail and with black levels a tad inkier and more impressive. Color is well handled with realistic and appealing skin tones. Contrast has been aptly applied for a consistent look to the production. The movie has been divided into 20 chapters.

The DTS-HD Master Audio 5.1 sound mix is good enough as well though most of the surround activity is relegated to a succession of syrupy pop ballads and rap songs filtered through the front and rear channels along with the background score by Howard Paar. Dialogue has been pretty well recorded though there are some garbled lines due to the actors mumbling. Atmospheric effects get a decent enough placement in available channels, but the mix isn’t really very distinguished.

Before I Fall offers a fantasy life lesson to young adults on making their everyday lives something worth living. Whether its intended audience will take its well-intentioned themes to heart is another matter, but at least the Blu-ray disc offers very good picture and sound for easy consumption. 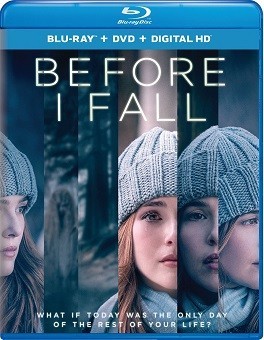