A stylish thriller with both unique qualities and very mundane ones as well, Irvin Kershner’s Eyes of Laura Mars never quite reaches the heights of suspense and sophistication to which it aspires.

A stylish thriller with both unique qualities and very mundane ones as well, Irvin Kershner’s Eyes of Laura Mars never quite reaches the heights of suspense and sophistication to which it aspires, but it’s still a lot of fun watching the filmmakers’ attempt to get there. With a fine cast of acting stalwarts and a wonderful view of a New York City which has long since passed, Eyes of Laura Mars is certainly worth a peep.

With her controversial book of graphic photographs right on the verge of being published, chic urban fashion photographer Laura Mars (Faye Dunaway) begins having a series of unsettling mind’s eye visions in which close friends are being murdered by an ice pick killer one-by-one. Assigned to protect the frightened artist is Manhattan detective John Neville (Tommy Lee Jones) who doesn’t much like Ms. Mars’ work but greatly likes the alluring and provocative artist. But she’s surrounded by people who are not to be trusted: her sleazebag ex-husband Michael Reisler (Raul Julia), still hanging around and looking for handouts, her ex-con driver Tommy Ludlow (Brad Dourif) who adopts a suspiciously possessive air around Ms. Mars and her models, and her agent Donald Phelps (Rene Auberjonois) who desperately wants Laura to keep working at any cost. As her friends and co-workers keep dropping like flies, the focus of the investigation begins to narrow to one particular suspect.

The John Carpenter-David Zelag Goodman screenplay has set the scene of the mystery amid the chic urban jungle of late 1970s New York, and the sensational graphic photography of Helmut Newton and Rebecca Blake adds a great deal of unsettling ambiance to the gripping tone of the piece. Unfortunately, the mystery isn’t all that hard to figure out especially with one gigantic piece of information planted early in the movie and which eagle-eyed viewers will latch onto easily which makes the identity of the killer pretty easy to spot. To his credit, director Irvin Kershner doesn’t revel in the graphic gore and violence that ice pick murders most assuredly would generate, and the clever means in which Laura sees through the eyes of the killer (hazy, desaturated imagery which is modeled on a videotape-like blurriness which Laura sets up to explain to the detective what she’s seeing) also helps obfuscate the most extreme portions of the violence. Kershner also handles some of the fashion montages with some impressive flair beginning with the messy casualness of the makeup trailer leading into the extremes of the shoots themselves done with staccato cuts and jumps, involving music and movement in most engaging fashion. But more should have been done to develop the romance between Laura and John to make it something we really care about rather than just something of the moment, and too many of the murders all happen on top of one another dissipating their shock and emotional effectiveness lessening their impact for the viewer.

With the movie beginning and ending with Barbra Streisand’s “Prisoner,” we’re reminded that the title role was originally intended for her with her then-boy friend Jon Peters producing, but Faye Dunaway is a more than reasonable replacement giving a performance of jangled nerves and disbelieving shock as her friends drop one-by-one. Tommy Lee Jones’ Southern accent seems a bit fish-out-of-water surrounded by the genuine brogues of his fellow New York police officers (especially Frank Adonis’ Detective Sal Volpe who seems to live and breathe Little Italy), but his performance as dedicated detective John Neville seems earnest and true. Rene Auberjonois offers great sophistication as Laura’s hardcore agent, and Brad Dourif offers another of his off-kilter comrades who’s a victim of circumstances. Real-life models Lisa Taylor and Darlanne Fluegel ring completely true as models Michelle and Lulu while Raul Julia does what he can with the vastly underwritten role of Laura’s unbalanced ex-husband Michael.

The film is presented in its original theatrical aspect ratio of 1.85:1 with 1080p resolution using the AVC codec. While sharpness is never razor-edged, the transfer is certainly acceptably clear and clean throughout with no signs of any age-related artifacts. Color is more than adequate without ever being deeply saturated, and the “Laura visions” of the murders are appropriately soft focused and lacking color vibrancy. Black levels are excellent seen especially at Laura’s gallery premiere which really offers the best sequence for strong contrast and vivid sharpness and color. The movie has been divided into 12 chapters.

The DTS-HD Master Audio 2.0 mono sound mix offers a very era-appropriate sound design. Dialogue comes through quite effectively throughout, mixed professionally with the tense music of Artie Kane and the sound effects which reflect late 1970s New York. There are no age-related issues like hiss, flutter, or crackle.

Audio Commentary: director Irvin Kershner shares some memories about making the film at the beginning though it’s not very long before he begins merely describing what we’re seeing on the screen.

Eyes of Laura Mars might have been an even more effective thriller than it turned out to be had the writing been a little more detailed with more extensive characterizations and some better development of the plot to ratchet the suspense more keenly and create a more complex puzzle for the viewer to solve. Still, the Mill Creek release of the movie on Blu-ray will likely please fans of the stars and the movie while others may prefer a rental rather than a purchase even with its pleasing low price. 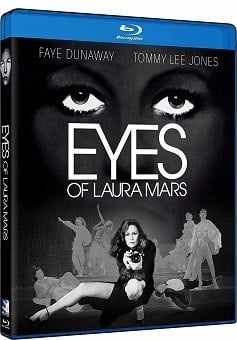