Forum List What's new Dark Style Change width
Log in Register
What's new Search
Menu
Log in
Register
Navigation
Install the app
More options
Dark Style
Close Menu
Posted on May 2, 2019 by Todd Erwin
You are using an out of date browser. It may not display this or other websites correctly.
You should upgrade or use an alternative browser.
Original twist unravels this thriller 2 Stars

Universal brings Steven Knight’s neo-noir thriller Serenity to Blu-ray in a barebones release that pretty much leaves the movie on its own terms, a thriller with a very original twist that ultimately unravels the whole thing.

I don’t usually lead off my review by quoting the movie’s description from the package itself, but Serenity is a film that almost defies a spoiler-free review.

From the creative mind of Oscar nominee Steven Knight comes a daringly original, sexy, stylized thriller. Baker Dill (Academy Award winner Matthew McConaughey) is a fishing boat captain leading tours off a tranquil, tropical enclave called Plymouth Island. His quiet life is shattered, however, when his ex-wife Karen (Academy Award winner Anne Hathaway) tracks him down with a desperate plea for help. She begs Dill to save her – and their young son – from her new, violent husband (Jason Clarke) by taking him out to sea on a fishing excursion, only to throw him to the sharks and leave him for dead. Karen’s appearance thrusts Dill back into a life he’d tried to forget, and as he struggles between right and wrong, his world is plunged into a new reality that may not be all that it seems.

I found Serenity to be an entertaining thriller, with good performances from its cast, until writer-director Steven Knight (Locke, Redemption) introduces what is, admittedly, an original twist for a Body Heat style thriller. It is that twist, even though it does not come out of thin air (clues are laid out before the full reveal), that ultimately unravels much of the logic and coherence of the story. It is nearly impossible to explain how this film falls apart without revealing some major spoilers, so for those who are still interested in viewing the film, please scroll on down to the Video portion of the review. 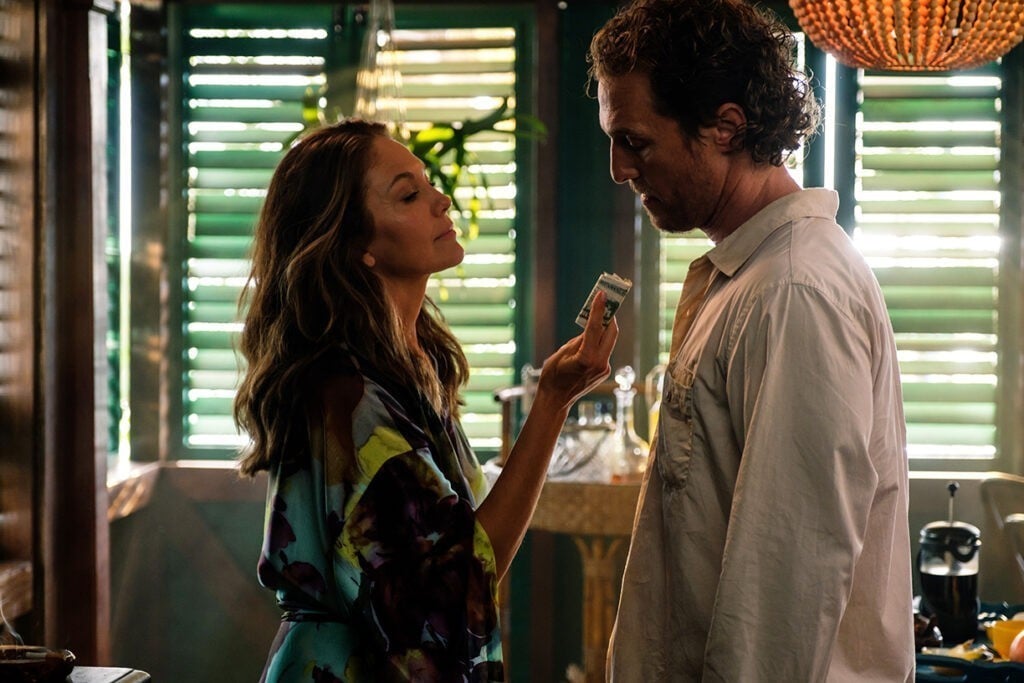 This “new reality” that Dill is thrust into is that he has been living inside a video game that his son has created and is playing while locked in his bedroom as his step-father is beating his mother. I can’t say that a plot twist like that has ever been done before, and in a different film it may have actually worked. The problem is it eventually works against everything that has played out previous to the eventual reveal and afterwards. The clues for the reveal are there for anyone familiar with RPG or third-person shooter games like Uncharted or Skyrim, like exaggerated environmental pans or shots from inside a monitor of Dill’s son writing code. But if Dill’s son created the game, isn’t it a bit creepy that he’s playing his father who has sex with his girlfriend at least twice as well as his mother? And if he created the game, how is Duke (Djimon Hounsou) able to throw a monkey wrench into the whole plan of killing off Frank (Jason Clarke) by hiring someone to assault and break Frank’s hand so he can’t go on the fishing trip? Did his son create AI’s that can think for themselves and not follow the directions of the game (and his own code)? And don’t even get me started on the strange little man in a suit trying to chase down Dill on the island and missing him by 10 seconds. It is questions and other actions like this that cause the whole plot to unravel and become utter nonsense. 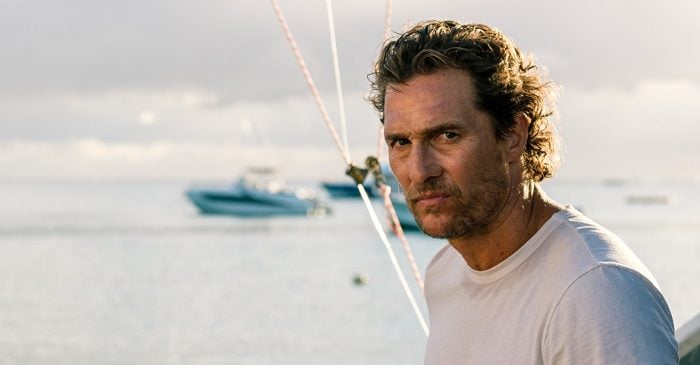 Serenity is yet another stellar video transfer on Blu-ray from Universal. Taking place on a fictional tropical island, possibly in the Caribbean, the movie is full of vivid and lively colors which come across quite beautifully on this 1080p AVC-encoded transfer that preserves the film’s theatrical aspect ratio of 2.39:1. Detail is also exquisite, from the textures of weather-beaten and peeling paint on the storefronts to the scruff on McConaughey’s face. There are quite a few scenes at night, and the black levels on display here are deep and inky yet still reveal a lot of shadow detail (unlike the recent broadcast of Season 8, Episode 3 of Game of Thrones).

Serenity includes a solo DTS-HD MA 5.1 track that is about what one expects in a surround track for a thriller of this type. Dialogue is clear and understandable throughout, music and effects are spread across the fronts and rears, and atmospheric sounds like rainfall add a sense of immersion to the track.

Digital Copy: An insert contains a code to redeem a digital on Movies Anywhere.

If Serenity were a more straight forward thriller without its “original” twist, I probably would have enjoyed it much more. The presentation on Blu-ray is exceptional, but that’s about it. 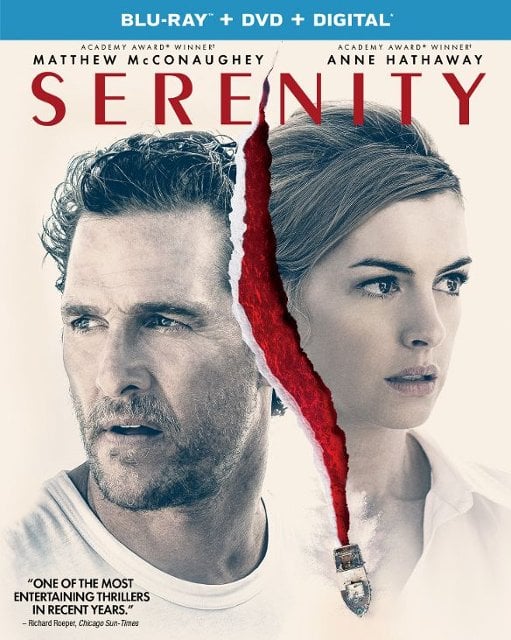