It’s always something very special when a sequel to a popular film is every bit as entertaining as its predecessor, and Matt Reeves’ Dawn of the Planet of the Apes certainly qualifies.

It’s always something very special when a sequel to a popular film is every bit as entertaining as its predecessor, and Matt Reeves’ Dawn of the Planet of the Apes certainly qualifies. Just as emotionally engrossing as the first prequel and more complexly constructed telling a series of parallel stories, Dawn of the Planet of the Apes is a satisfying, thoughtful drama with incredible visual effects that make the improbable tale seem completely possible and relatable.

After a virus developed in the lab which spawned genetically enhanced chimpanzee Caesar wipes out seemingly the entire human population of the Earth, the apes led by Caesar (Andy Serkis) flourish in their Muir Woods utopia in the decade following human extinction. The apes are thus surprised to learn that a small band of human survivors, genetically immune to the virus, has established a base in San Francisco and led by Malcolm (Jason Clarke), his wife Ellie (Keri Russell), and his son Alexander (Kodi Smit-McPhee) need the permission of the simians to jerry-rig an abandoned dam on the other side of the forest so it can provide power they need for survival. Though Caesar is mistrustful of the humans, he allows them to try closely watched by his cohorts, but Caesar’s once trusted ally Koba (Toby Kebbell), who despises all humans, is determined to turn the ape population against them even if that means replacing Caesar as the anointed head of the ape population.

Rick Jaffa, Amanda Silver, and Mark Bomback have written a screenplay with a lot of obvious parallel stories between humans and apes: fathers and sons (Malcolm/Alexander and Caesar/Blue Eyes), doting mothers (Ellie and Cornelia), and hate instigators (Dreyfus-Gary Oldman and Koba). The themes of love and compassion knowing no species and the hunger for power and the thirst for annihilation crossing all boundaries get hammered home continually throughout the film often to gut-wrenching effect. Director Matt Reeves take his time establishing his dominant ape civilization at the beginning which places us firmly on their side, especially since the first appearance of a man (Kirk Acevedo playing the heinous and appropriately named Carver) has him holding a gun on the apes. But once the attacks begin, it’s one explosive set piece after another as the apes charge the human population barricaded in San Francisco and find ingenious ways to work around the human’s initial firepower advantages. As Caesar learns of Koba’s treachery, it’s obvious that a face-off between the two is inevitable, matched by the confrontation on the human side between Malcolm who argues for peace and Dreyfus who wants to blow the apes off the face of the Earth.  As Caesar wryly realizes how much like humans the apes actually are (he had always considered them superior), the movie’s themes all have a way of twisting together setting up the inevitable follow-up sequel.

In the three years between the two Planet of the Apes prequels, motion capture had advanced significantly, and as fantastic as Andy Serkis was in the first film Rise of the Planet of the Apes, he’s even more impressive here as Caesar goes through the entire spectrum of emotions with the viewer as his willing surrogate. Jason Clarke is effectively understated as the calm, compassionate Malcolm, and Keri Russell matches him every step of the way as Ellie. Kodi Smit-McPhee is also just fine as son Alexander as is Nick Thurston as Caesar’s son Blue Eyes. As the film’s two parallel villains, Toby Kebbell’s Koba makes a far greater impression than Gary Olman’s Dreyfus (parts of his performance may have been left on the cutting room floor since he doesn’t seem as bloodthirsty earlier in the film as he is in the last third), Kebbell’s motion capture performance chilling and fierce throughout. The movie also lets us have more interaction with Caesar’s orangutan amigo from the first film Maurice played ably by Karin Konoval and another ally Rocket performed by Terry Notary. While all of the simian CG work is phenomenally photorealistic, there are early scenes in the movie where the apes hunt caribou and are attacked by a bear that looked computer generated and a notch below the work done with the apes.

The film’s 1.85:1 theatrical aspect ratio is faithfully rendered in 2160p using the HEVC codec. With color more in control and consistent in this UHD version, image quality throughout is tremendous. The many close-ups especially of the CG apes allow us to see the facial features and details in the eyes that simply bristle with realism. Contrast has been consistently applied to the picture, and the use of HDR has been applied sparingly to prevent the film from taking on an other-worldly appearance. Though the 3D is missing from this encode, the image nevertheless is impressive. The apes’ sign language is subtitled in yellow and is very easy to read. The movie has been divided into 40 chapters.

The DTS-HD Master Audio 7.1 sound mix offers the expected impressive array of surround sound immersion with Michael Giacchino’s background score and the split effects wonderfully threaded through the front and rear channels. Dialogue has been routed to the center channel, and as in the previous film, the use of the LFE channel is deep and most expressive.

Audio Commentary: contained on both the UHD and Blu-ray enclosed discs, director Matt Reeves delivers a very chatty and informative set of anecdotes for every scene in the movie.

All of the other extensive bonus features are contained on the enclosed Blu-ray disc which is identical to the original Blu-ray release of the movie.

Deleted Scenes (4:34, HD): three scenes may be viewed together or separately and with or without commentary from director Matt Reeves.

The Ape Community (10:26, HD): a behind the scenes look at the construction and utilization of the ape utopia in the Muir Woods (built in Vancouver). Among those commenting are production designer James Chinlund, props master Doug Harloker, special effects producer Ryan Stafford, and actor Toby Kebbell.

Move Like an Ape (15:25, HD): an extensive look at the “ape school” run by motion capture artist Terry Notary who schooled the ape actors in movement and speech. His work is praised by director Matt Reeves, actors Andy Serkis and Toby Kebbell, stunt supervisor Chris Brewster, and stuntman Jason Chu.

Theatrical Trailers (6:17, HD): three trailers may be watched individually or together. 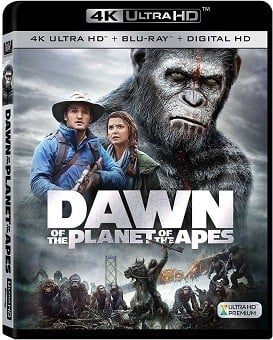