Posted on April 27, 2016 by Matt Hough
Unusual, effective character study won't be for all tastes 3.5 Stars

A melancholy character study with frustrating ambiguities and a nihilistic tone that’s sometimes overpowering, Ivan Passer’s Cutter’s Way nevertheless haunts in its own unique fashion. It’s often a difficult movie to watch with some abrasive characters and others who are aimless and noncommittal, and yet despite a narrative that’s more introspective than active and some scenes that seem piddling and unnecessary, it’s still a film that can get under your skin and force you to think about its pronouncements and observations. Twilight Time’s new Blu-ray disc release gives the movie the attention it deserves even if it isn’t for all tastes.

Embittered by injuries suffered during the Vietnam War and basically blaming the government for his disabilities, Alex Cutter (John Heard) finds a real cause worth fighting for when his best friend Richard Bone (Jeff Bridges) witnesses a shadowy figure dumping a body in a trash can in a dark alley in the middle of the night. At first Bone isn’t clear who the perpetrator is, but after thinking about it and seeing the man in daylight, he’s convinced it’s oil mogul J.J. Cord (Stephen Elliott). Cutter and the victim’s sister Valerie (Ann Dusenberry) want to set a trap for the millionaire to reveal his guilt, and while Bone says he’ll go along with a faux extortion attempt, both he and Cutter’s unhappy, alcoholic wife Mo (Lisa Eichhorn) think it’s pointless going after so big a fish with so much protection around him and with only some flimsy circumstantial evidence on their side.

Adapted from the novel Cutter & Bone by Newton Thornburg, Jeffrey Alan Fiskin’s screenplay doesn’t really follow any conventional narrative paths: it’s not really a mystery (though it’s hard not to look for other potential murderers or clean-up men from among the characters, Bone’s boss George Swanson ­– Arthur Rosenberg – being one of them); it’s not a modern noir exactly nor really a buddy film like The Sting or The Last Detail, but rather it’s its own entity: an original character study that as a rule often has a hard time finding an audience (which this did in its initial release). Despite being a Czech immigrant, director Ivan Passer certainly gets into the milieu of Santa Barbara’s haves and have-nots, seen clearly in several realistic set pieces: a spat between neighbors in a rundown neighborhood, a festival parade, a swank marina restaurant, a ramshackle boardwalk, a tony polo match, and the climactic lawn party at a lavish mansion (the best action scene in the movie), all beautifully captured in expansive long shots and more telling close-ups as the central characters in the drama interact in these very different surroundings. Passer also zeroes in on one of the story’s more disturbing elements: the love triangle between Cutter, his wife, and Bone, and a late love scene between Bone and Mo is uncomfortably guilt-ridden and lacking passion, made even more distressing when Bone leaves her as any common gigolo would even though he had promised her he would stay (not the first evidence in the movie of Bone’s gigolo nature).

Director Passer has let actor John Heard have his head and dominate all of his scenes both physically and emotively, sometimes going right to the top of hamminess without quite reaching the limits, but his work is so mesmerizing that it’s impossible to look away. Jeff Bridges plays another of his golden boys where the sparkle is just starting to fade from his outer luster, and it’s a good, solid performance that finds its way from indifference to eventual involvement. Lisa Eichhorn is very quiet and thoughtful as Mo, never resorting to the bombast of her co-star in expressing her dissatisfaction with her lot in life and disillusionment with her husband and (what may be) her former love. Arthur Rosenberg is all good natured joviality as Bone’s employer George (and with a surprise connection to Heard’s Cutter too which we learn about late in the movie). Stephen Elliott and Patricia Donahue both give off the chilly vibes of the entitled as the enigmatic Mr. and Mrs. Cord while Ann Dusenberry has a decent moment or two as the sometimes grieving and vengeful Valerie Duran.

The film’s original theatrical 1.85:1 aspect ratio is faithfully rendered in this 1080p transfer using the AVC codec. Sharpness varies in the transfer from good to great, but it’s sometimes unclear whether it’s a problem with the focus pulling or if the softer medium shots later in the film are deliberate. Color is solid and consistently presented with accurate and appealing skin tones. Black levels are fine but not always of optimum darkness, and there are some minor dust specks here and there. The movie has been divided into 24 chapters.

The DTS-HD Master Audio 1.0 sound mix has been cleaned up and is presented with more than acceptable fidelity and no age-related artifacts to torment the listener. Dialogue is always understandable, and Jack Nitzsche’s sometimes unsettling music and the atmospheric effects have all been blended most professionally.

Audio Commentary: producer Nick Redman and film historian Julie Kirgo discuss with insight and intelligence the film’s merits and also the times in which it was made redolent of 1970s movies but also serving as something of a precursor to the attitudes of the 1980s.

Six-Page Booklet: contains some color stills, original poster art on the back cover, and film historian Julie Kirgo’s extensive appreciation for the movie.

Cutter’s Way is one of the more original character dramas from the early 1980s. Its somewhat sour tone and a lack of decisive action may not make it a film for all movie lovers, but those curious about its themes and stars may want to check it out. There are only 3,000 copies of this Blu-ray available. Those interested in purchasing it should go to either www.twilighttimemovies.com or www.screenarchives.com to see if product is still in stock. Information about the movie can also be found via Facebook at www.facebook.com/twilighttimemovies. 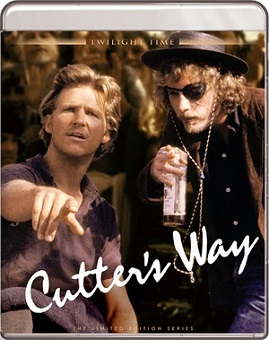