Forum List What's new Dark Style Change width
Log in Register
What's new Search
Menu
Log in
Register
Navigation
Install the app
More options
Dark Style
Close Menu
Posted on April 24, 2016 by Matt Hough
You are using an out of date browser. It may not display this or other websites correctly.
You should upgrade or use an alternative browser.
Entertaining Fox musical of the 1940s 3.5 Stars

My Gal Sal delivers the kind of old-fashioned entertainment that marked all of Fox’s best musicals of the 1940s. Rita Hayworth is at her glamorous best, and Victor Mature makes a very engaging leading man for her.

With Alice Faye out on maternity leave and Betty Grable busy with her own string of hit musicals, 20th Century Fox borrowed Rita Hayworth from Columbia to play the title role in one of the splashiest Technicolor musicals they had yet made: Irving Cummings’ My Gal Sal, and with the star’s glamor and considerable terpsichorean skills, My Gal Sal emerges as one of the high water marks in Fox’s string of showgirl musicals made during the 1940s.

While showgirl Sally Elliott (Rita Hayworth) is certainly the top-billed star of the picture, the movie is actually a (much fictionalized) biography of songwriter Paul Dresser (Victor Mature), older brother of celebrated American writer Theodore Dreiser. From the moment he leaves home determined not to study for the ministry but to make his way as a songwriter in show business, Paul experiences a topsy-turvy ride starting as a shill in medicine shows and eventually graduating to writing hit songs for the revues starring one of Broadway’s most glimmering headliners of the Gay Nineties: Sally Elliott. Sally and Paul also engage in a feisty, combative emotional attachment, breaking the hearts of Mae Collins (Carole Landis) and later the married Countess Rossini (Mona Maris) on his part and Sally’s producer Fred Haviland (John Sutton) on hers.

Screenwriters Seton I. Miller, Darrell Ware, and Karl Tunberg have written Paul Dresser as a cocky, self-important showman who can play two pianos simultaneously and displays extreme confidence long before he ever scores his first hit tune. The movie is certainly crammed to the gills with his melodies (and some by other writers, too: Ralph Rainger and Leo Robin among others), very few of them familiar to today’s ears but all of them lyrical and hummable, and in typical Fox musical fashion, all are presented as performance pieces rather than being integrated into the narrative love story between these two artists with ragingly healthy egos. Though both Hayworth and Mature are dubbed by professional singers (she by Nan Wynn who was her regular ghost singer during this period, he by Ben Gage), they manage to be convincing enough in their pantomime performances to put over the surfeit of musical numbers: he with “Liza Jane” and in the duets “The Pity of It All” and “Here You Are” and she in a string of colorfully staged and buoyant theatrical production numbers: “On the Gay White Way” (where she dances gracefully with the film’s co-choreographer Hermes Pan), “Come Tell Me,” “Me and My Fella and a Big Umbrella” (with Rita’s best soft shoe tap routine in her career), and Dresser’s most famous tunes “On the Banks of the Wabash” and the title tune “My Gal Sal.” Director Irving Cummings keeps the tempestuous love story between these two spirited individuals flowing along its smoothly predictable course with nary a bump nor bruise.

This was likely one of the prime films that established Rita Hayworth as one of the top pin-up girls of World War II, for she had never before enjoyed this kind of lavish Technicolor musical at Columbia (though Cover Girl and Down to Earth would later come along), and she seems to be enjoying every moment in the dazzling array of extravagant costumes and elaborate stage settings (production design that earned the film an Academy Award) that show her off to supreme advantage. Victor Mature makes an equal match to Hayworth’s Sally in temperament and the ability to hold his own on the screen, even if his piano miming isn’t always believable, and it’s clear that the singing voice emanating from his lips isn’t his (Nan Wynn was a much more felicitous singing double for Hayworth). John Sutton is his usual sweetly, colorless self as the silently pining Fred Haviland, and Carole Landis is completely wasted as Paul’s first love who totally disappears from the film well before the first half hour is over. More colorful in their small bits are James Gleason as music publisher and agent Pat Hawley, Phil Silvers (who comes out of nowhere late in the movie) as song plugger Wiley, Walter Catlett as the nefarious medicine show barker Colonel Truckee, and John Kelly as heavyweight champion John L. Sullivan who makes the most of his one big scene in a restaurant.

Fox has obviously done some extensive work on this 1.33:1 transfer cleaning it up to a sparkling degree by eliminating every wisp of dust and dirt (and also reel change cues). This is one of the closest approximations of the original three-strip Technicolor seen in a Fox musical transfer, and while there are some sequences that seem a bit on the dark side with occasional details crushed in the shadows, the color is much more luscious and controlled here than in most of the musicals Fox has issued in their Cinema Archive series. Contrast is also consistently on view making sharpness very good (except in softly focused glamor close-ups) in a very enjoyable viewing experience. The movie has been divided into chapters every ten minutes so this film has 11 chapters.

The Dolby Digital 2.0 mono sound mix is decoded by Dolby Prologic into the center channel. After adjusting the volume controls downward to prevent distortion and equipment damage, the dialogue, music, and sound effects all blend seamlessly into a most effective audio track, and age-related problems with hiss and crackle have been eliminated by Fox’s engineers.

There are no bonus materials in this made-on-demand disc.

My Gal Sal delivers the kind of old-fashioned entertainment that marked all of Fox’s best musicals of the 1940s. Rita Hayworth is at her glamorous best, and Victor Mature makes a very engaging leading man for her. With plenty of tuneful melodies and a colorfully handsome production, My Gal Sal is a musical lover’s delight.

I wonder how this compares to the (licensed) pressed DVD released in Spain by Impulso a few years back...

It's probably the same transfer if it's licensed. There has obviously been work and care extended to this film because it's clean as can be with no dust and dirt and better color than 95% of the Fox color films from this period available on DVDs. The sound has been cleaned up, too. This could have been released in that Fox Marquee Musical series that gave us Weekend in Havana, Pin-Up Girl, Pigskin Parade, Daddy Long Legs, and On the Riviera. I wonder if Fox had prepped it for the next round of releases and then dropped the series.

I agree that My Gal Sal is very entertaining and the dvd looks better than most of the "Technicolor" titles in the Fox Archives. Two other Archive titles that appear to have had some clean-up work are Mother Wore Tights (1947) and Call Me Mister (1951). I've thought those two may have been prepped for a Grable Vol. 2 dvd collection that was never released.

Interesting Matt that you're being sent review copy titles that have been on the market for awhile. This one has been available since 2012.

i have both dvds and it looks like they used the same transfer.

Interesting Matt that you're being sent review copy titles that have been on the market for awhile. This one has been available since 2012.[/QUOTE]

Fox has been sending these archive titles for years, but there is no due date on reviews so I only do them when there is a lull in current studio product. I try to select items from the top, middle, and bottom of the stacks of them I have which is why I did two very recent releases like You're My Everything and Too Busy to Work and then older releases like My Gal Sal. Just trying to keep things interesting and fun.

Makes sense Matt. Your reviews are always very informative and well-balanced. Thanks again.

Hi Matt. Watched this last night for the first time and looked up your review. The color is highly impressive. I wondered if a pristine nitrate print was found and utilized. Who did dub Mature in this film? Maybe obe of the singers who dubbed Cornel Wilde and William Eythe in CENTENNIAL SUMMER? Is there any word on Fox sorting out the legal issues with tha musical, which has been restored and was brirfky announced by TT?
I read that Landis was offered Hayworth's role but caused a fuss over something and was relegated to a supporting role. Sounds hard to believe to me. Sal in the film was ficticious but Dresser/Dreiser had an ongoing relationship with a bordello madam named Sally ,so the title song was probably devoted to her. No wonder they left that out! Interesting that famous novelist Theodore was briefly portrayed by a child star in the early portion of the film.

lionel59 said:
Hi Matt. Watched this last night for the first time and looked up your review. The color is highly impressive. I wondered if a pristine nitrate print was found and utilized. Who did dub Mature in this film? Maybe obe of the singers who dubbed Cornel Wilde and William Eythe in CENTENNIAL SUMMER?
Click to expand...

As I mentioned in the review, Ben Gage was the voice double for Victor Mature, and, yes, he also voice doubled Cornel Wilde in Centennial Summer. David Street dubbed William Eythe.

i'd read that disputed role was for 1941's Blood and Sand. Landis did not want to dye her hair red for the

part of the temptress, "Dona Sol". Hayworth won that part and the rest is history

Apologies Matt. I must have read your review too qiickly and missed the mention of Ben Gage. IMDB don't mention him. He is/was a pleasing tenor but does not sound much like Mature would sound if he could sing. Nan Wynn and Jo Ann Greer served Hayworth well and were plausible vocal doubles for her. A pity people of this ilk were not called in for the vocally deficient leads of LA LA LAND. Somewhere around the late '60's, star egos seemed to gain more clout and non-singers were allowed to do the singing (egs. Lucille Ball, Peter O'Toole. Clint Eastwood, Lee Marvin), adding to the swift decline of the Hollywood musical.
You must log in or register to reply here. 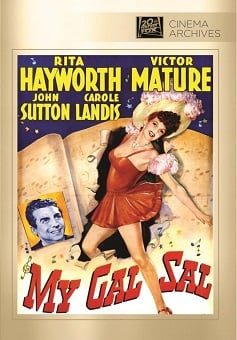