Forum List What's new Dark Style Change width
Log in Register
What's new Search
Menu
Log in
Register
Navigation
Install the app
More options
Dark Style
Close Menu
Posted on November 4, 2016 by Matt Hough
You are using an out of date browser. It may not display this or other websites correctly.
You should upgrade or use an alternative browser.
Not wholly satisfying effort from a famous director on his second film 3 Stars

In his second feature film Boxcar Bertha, director Martin Scorsese attempts to bring a kind of Bonnie and Clyde vibe to a rather uninteresting true story of depression life.

In his second feature film Boxcar Bertha, director Martin Scorsese attempts to bring a kind of Bonnie and Clyde vibe to a rather uninteresting true story of depression life. With leading characters which never quite grab our full interest and a narrative that jumps from incident to incident without building or sustaining the inherent dramatic possibilities, Boxcar Bertha only holds our attention now in observing the master director in embryonic form with occasional touches and flourishes that he’d bring to much more worthwhile projects within a few years.

When her crop duster father dies in a plane mishap, Bertha Thompson (Barbara Hershey) hops in a boxcar and rides the rails to her destiny. She meets and falls in love with union organizer Big Bill Shelly (David Carradine) and later hooks up with gambler Rake Brown (Barry Primus) and Shelly’s best friend Von Morton (Bernie Casey) forming a posse of sorts to rob the Reader Railroad and send their haul back to union headquarters. But Reader owner H. Buckram Sartoris (John Carradine) and his McIver bodyguards (Victor Argo, David Osterhout) are never far behind the gang ready to use whatever force necessary to bring them down.

Bertha’s picaresque adventures have been scripted from her memoirs by Joyce and John William Corrington. We follow Bertha from her Arkansas farm, hopping the rails, robbing the railroad, and later working in a brothel while her fellow gang members spend time in and out of prison. There isn’t great intensity driven into the narrative, and thus the performances likewise seem a little lightweight for the depression-era story that’s unfolding before us though one must give credit that the sense of the era is captured rather well in the production design and the use of forlorn harmonica and banjo music on the soundtrack. Director Martin Scorsese adds some cinematic touches to the film with interesting overhead panning shots (the climactic sequence comes alive due to the inventive camerawork capturing a sense of desperation and melancholy that is missing in other central passages), and the bloodbath near film’s end faintly prepares us for the searing violence to come a few years later in the climax to Taxi Driver even if this one features the fake American International-style too-orange blood that always looks phony to modern eyes. Because the characters we’re dealing with here aren’t brain surgeons, their lack of intelligence is often rather irritating, never bothering to hide their faces during robberies and never seeming to understand the real danger they’re in at any given moment. The tone is a bit lackadaisical to give the movie the power that it might have displayed, and because the central love story between Bertha and Bill is sporadic in the narrative (though it features no modesty on behalf of either actor willing to completely strip down when the need arises), that doesn’t grip us to the same degree it does in Bonnie and Clude either.

Barbara Hershey does a lot of smiling in the film, sometimes ill-suited to the particular circumstances of the moment making us believe she and her fellow cons are all a bit short on brain cells. David Carradine shows more electricity on the screen even though his character’s transition from union organizer to bum happens so joltingly that we feel some necessary scenes might have been left on the cutting room floor. Bernie Casey gives the most charismatic performance in the movie as the loyal and loving Von Morton, victim of the area’s bigotry and prejudice but never losing his own nobility in the process. Barry Primus has some strong moments as a Yankee gambler doomed to live in the South who finds it necessary to hide his northern roots from the bigoted residents of Arkansas. It’s great to see John Carradine acting alongside his son David in several scenes (though they’re, of course, on opposite sides of the conflict), and he’s as usual the complete professional. Look quick to see the young Sylvester Stallone in a hobo jungle, and director Martin Scorsese has a cameo as a brothel patron who doesn’t want to spend the night alone.

The film’s theatrical aspect ratio of 1.85:1 is faithfully rendered in this 1080p transfer using the AVC codec. Apart from a few dust flecks, the transfer looks very good indeed with excellent sharpness and color saturation levels that are finely tuned without blooming even with all that fake blood. The film’s original grain levels seem to have been respected and have not been obliterated by digital scrubbing. Contrast has also been consistently administered for a reliable image. The movie has been divided into 24 chapters.

The DTS-HD Master Audio 2.0 mono sound mix is very typical of its era. The dialogue has been professionally recorded and has been blended with surety with the spare harmonica and banjo score of Gib Guilbeau and Thad Maxwell and the atmospheric effects pertinent to the scenes.

Boxcar Bertha offers some early glimpses into the celebrated directorial career to come for its helmer Martin Scorsese. As for the film, it has some interesting moments amid some other less than satisfactory ones, but it looks tremendous in this new Twilight Time Blu-ray release. There are only 3,000 copies of this Blu-ray available. Those interested in purchasing it should go to either www.twilighttimemovies.com or www.screenarchives.com to see if product is still in stock. Information about the movie can also be found via Facebook at www.facebook.com/twilighttimemovies. 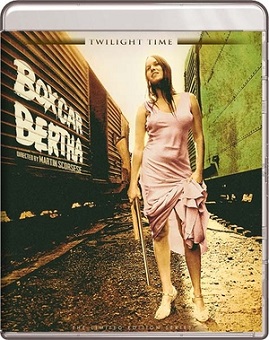