A riveting and sadly under-appreciated World War II caper adventure made with great intelligence and heart behind the filmmaking, John Frankenheimer’s The Train holds its own with all films based on events coming from that conflict.

A riveting and sadly under-appreciated World War II caper adventure made with great intelligence and heart behind the filmmaking, John Frankenheimer’s The Train holds its own with all films based on events coming from that conflict. With the imminent liberation of Paris beckoning while frenzied Nazis plan their escape, Frankenheimer’s film takes hold of the viewer in its gritty grip and doesn’t let go until the last image fades. With two enthralling central performances and the director at the very peak of his powers, The Train deserves to be on everyone’s must-see list, and now with the Blu-ray once again available courtesy of this Twilight Time Encore Edition, everyone can have an opportunity to experience its power.

Determined to loot the art museums of Paris for their treasures which he’ll carry back triumphantly to Berlin, Colonel Von Waldheim (Paul Scofield) insists on a train to transport his stolen art treasures even though Nazi leaders need it for troop transport out of the country with the Allies about to enter the city. He commands (unknown to him) French underground leader Labiche (Burt Lancaster) to engineer the train on the journey from France to Germany, but the active underground workers near the end of their four-year occupation by the Nazis have several surprises planned to prevent the artworks from leaving their homeland. And even when Waldheim takes direct command of the engine, Labiche on his own has a few tricks left to slow down the determined colonel playing against time in the hope that the Allies will finally arrive.

Frankenheimer takes his time setting up the elaborate exposition of the characters and their differences of opinion about the plan (even the main title sequence is unique as we see the art treasures boxed up for shipment letting us know what masterpieces are at stake just by the painters’ names on the crates) before we get to the eventual caper. Because we aren’t clued in exactly what the first couple of planned detours for the Nazis will be, they come as much of a surprise to the viewer as they eventually become for the Germans (kudos to Oscar-nominated writers Franklin Coen, Frank Davis and the uncredited assists of Walter Bernstein, Ned Young, Howard Infell for withholding information for the smartest of reasons). Once events begin to transpire, we are propelled from one terrific set piece to another with tension gathering all the while as director Frankenheimer stages and shoots some of the most exciting and impressive overhead artillery attacks seen in movies (all the more impressive because they’re done in real time with real equipment and not with special effects miniatures) and then later in the movie several wrecks and derailings that are just visually so stunning that they take one’s breath away.

Burt Lancaster’s commanding presence as resistance leader Labiche combines his serious acting chops with his unparalleled physicality to make his character the central focus of the entire enterprise, and this emerges as one of his most memorable performances. Paul Scofield is the very soul of maniacal cool as the aristocratic German colonel determined to have his way regardless of how the war is going. In what amounts to little more than a cameo role, Jeanne Moreau as a hotel proprietor who aids Lancaster’s Labiche is grimly effective while Wolfgang Preiss as the colonel’s second-in-command is equally impressive as his more reasonable underling. As French resistance fighters who take various parts in the train camouflages and sabotages and subterfuges, Michel Simon, Albert Remy, Charles Millot, and Jacques Marin all play their parts with precision even if they are dubbed in some cases by English speaking actors.

The film is framed at 1.66:1 for this 1080p transfer using the AVC codec, and this transfer is the same one which was issued on the original Blu-ray release by Twilight Time. Grayscale is thoroughly impressive with solid black levels which vary from good to excellent and crisp, clean whites. Sharpness is superlative throughout offering extremely detailed images which are almost painterly in their impact. There are dust specks that pop up here and there throughout the presentation, some flaws in the vault footage used, and some spotting and damage in three or four prominent places, but overall the image quality is so impressive that these few anomalies hardly matter. The film has been divided in this Encore Edition into 24 chapters.

The DTS-HD Master Audio 2.0 mono sound mix is very typical of its era. Dialogue is presented clearly and even the dubbed voices are matched fairly well in volume levels with the directly recorded speech. Maurice Jarre’s very spare score and the explosive sound effects have a better than average heft to them making for a solid mono soundtrack.

Audio Commentaries: two are provided. Director John Frankenheimer laconically narrates some anecdotes he can remember about making the movie with several silent patches throughout. The newer commentary featuring producer Nick Redman, film historian Julie Kirgo, and film professor Paul Seydor is an outstanding one as the three share interesting and illuminating information and opinions on this masterful work.

Six-Page Booklet: contains some black and white stills, original poster art on the back cover, and film historian Julie Kirgo’s enthusiastic essay on the movie.

Highly Recommended! John Frankenheimer’s The Train has been neglected for far too long. As one of the real jewels in the director’s filmography, it deserves serious rediscovery and appreciation as one of the era’s most outstanding war-based thrillers. There are only 3,000 copies of this Encore Edition Blu-ray available. Those interested in purchasing it should go to either www.twilighttimemovies.com or www.screenarchives.com to see if product is still in stock. Information about the movie can also be found via Facebook at www.facebook.com/twilighttimemovies. 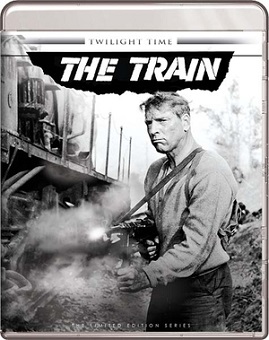