Uneven but entertaining penultimate season of the hit series 3.5 Stars

Among the darkest of its eleven seasons on the air, Fox’s Bones and its producers explored new and sometimes off-putting personal and professional territory in bringing their penultimate season to television screens.

Among the darkest of its eleven seasons on the air, Fox’s Bones and its producers explored new and sometimes off-putting personal and professional territory in bringing their penultimate season to television screens. One of Fox’s most reliable series which seems to deliver ratings no matter where it’s moved or how shabbily it’s treated, the show is currently airing its last thirteen episodes, and the twenty-two episodes of season eleven paved the way for the show to place many of its strongest and most interesting characters in situations which challenged their mettle and occasionally made it difficult for long-time fans to remain faithful to the show.

With the show’s two main characters having (foolishly) left their jobs at respectively the Jeffersonian Institution and the FBI at the end of season ten, the new season gets off to a soul-rattling start with the disappearance of former FBI agent, now Quantico instructor Seeley Booth (David Boreanaz) eventually shown wounded and bleeding out while confederates sit around watching him die. His wife forensic anthropologist Temperance Brennan (Emily Deschanel) is lured back to the Jeffersonian Institution when the skeleton of a man evincing bone identifying markers common to her husband turns up and she arrives to lend her expertise to the investigation. In her place as head of forensic anthropology is her former intern Arastoo Vaziri (Pej Vahdat) whose several mistakes in the investigation cause Brennan to reapply for her old job, making things difficult for her former boss Camille Saroyan (Tamara Taylor) who’s on the verge of an engagement with Arastoo. Once the mystery of the Booth bones is solved (the first in a series of deaths or life-changing injuries for members of the team), the series gets back on its feet for many of the remaining episodes of the season.

But other team members do undergo traumatic times. Booth’s partner James Aubrey (John Boyd) who joined the team last season is severely injured in a bomb blast, an explosion which also leads to the crippling of the show’s most upbeat and amusingly eccentric character, “Bug Boy” himself Dr. Jack Hodgins (TJ Thyne). His bitterness and depression over his seemingly unrecoverable condition make for three of the most uncomfortable episodes in the history of the series, his attitude so downbeat and negative as to almost drive away his wife, forensic artist Angela Montenegro (Michaela Conlin), and fans of the show with her. The series continues with its round-robin set of interns who are brought in to investigate murder victims along with Dr. Brennan: the always appealing and grounded Wendell Bray (Michael Grant Terry), Dr. Clark Edison (Eugene Byrd) who becomes a murder suspect in a late season cold case, Cuban lothario Dr. Rodolfo Fuentes (Ignacio Serricchio), egotistical Dr. Oliver Wells (Brian Klugman), the much-missed comically nihilistic Colin Fisher (Joel David Moore), Daisy Wick (Carla Gallo) who is far more settled and bearable this season than ever before, and Jessica Warren (Laura Spencer) who having set her cap for the late Dr. Sweets in season nine now goes on the prowl for Agent Aubrey with the show’s irritating and unconvincing preoccupation with emotionally involving so many of its cast members with one another.

As in previous seasons, there is a serial murderer on the prowl, this year The Puppeteer, but to the show’s credit, the secret killer is only the focus of two of this season’s episodes (including the traditional season cliffhanger) thus allowing the majority of this year’s episodes to be closed-ended cases allowing the viewer to play along trying to guess whodunit in one of network television’s final remaining mystery series. This year, the victims included, among others, an inventor, a fantasy footballer, a U.S. senator, a magician, a reporter, a policeman, a men’s rights advocate, an acapella college singer, a Secret Service agent, a star hockey player, and a French Marquise. One episode this season allowed Booth and Bones to trot out their fun aliases Buck and Wanda as they saddle up to solve a murder at an Old West reenactment. Another unique episode brings reality show cameras into the lab as the staff goes through their paces showing how they solve a typical mystery. Patricia Belcher as plain-spoken attorney Caroline Julian and Ryan O’Neal as Brennan’s father also make sporadic appearances through the season.

Here are the twenty-two episodes for season eleven spread over six discs in this DVD set:

2 – The Brother in the Basement

4 – The Carpals in the Coy-Wolves

5 – The Resurrection in the Remains

6 – The Senator in the Street Sweeper

7 – The Promise in the Palace

8 – High Treason in the Holiday Season

9 – The Cowboy in the Contest

12 – The Murder of the Meninist

13 – The Monster in the Closet

14 – The Last Shot at a Second Chance

17 – The Secret in the Service

The episodes are presented in their widescreen television aspect ratio of 1.78:1 and are anamorphically enhanced for widescreen televisions. Even in standard definition again this season (several previous seasons were issued on Blu-ray but not after season eight), the show has a warm look to much of the cinematography, and the transfers capture it beautifully in sharp, colorful detail with very natural flesh tones. Black levels are very nicely realized, and shadow detail is better than one might expect. There is some minor aliasing that can be occasionally glimpsed, but it’s never intrusive. Each episode has been divided into 12 chapters.

The Dolby Digital 5.1 sound mix uses music as the primary inhabitant of the front and rear surround channels, and yet it’s placed so masterfully that it seems to almost hover over the proceedings constantly and makes for a very mood-enhancing experience (bass is particularly impressive during several nightmares in the season ending episode). There are occasional ambient sounds of voices in the lab or at a restaurant and some whooshing sound effects with vehicles as they speed to crime scenes along with some explosions which offer some work for the subwoofer apart from the music.

The penultimate season of Bones had its upsetting and unsettling moments, dire enough to have turned off a segment of its very loyal fan base, but the mysteries are as entertaining to solve as always, and the cast always does the best it can with the material offered. The set itself is rather barebones with very little effort put forth on bonus material, but the quality on standard definition is still very high. 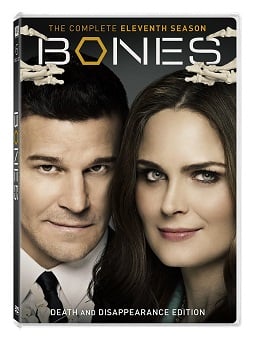