Superb Blu-ray of one of the best World War II films of the post-war era 4.5 Stars

Battleground realistically and effectively depicts the hardships endured by American soldiers during the Battle of the Bulge in December, 1944.

To the U.S.A. Commander of the encircled town of Bastogne.

The fortune of war is changing. This time the U.S.A. forces in and near Bastogne have been encircled by strong German armored units. More German armored units have crossed the river Our near Ortheuville, have taken Marche and reached St. Hubert by passing through Hompre-Sibret-Tillet. Libramont is in German hands.

There is only one possibility to save the encircled U.S.A. troops from total annihilation: that is the honourable surrender of the encircled town. In order to think it over a term of two hours will be granted beginning with the presentation of this note.

If this proposal should be rejected one German Artillery Corps and six heavy A. A. Battalions are ready to annihilate the U.S.A. troops in and near Bastogne. The order for firing will be given immediately after this two hours term.

All the serious civilian losses caused by this artillery fire would not correspond with the well-known American humanity.

To the German Commander.

William Wellman’s Battleground is one of the more realistic World War II films to be made in Hollywood during the post-war era. The action takes place in December, 1944 and follows a platoon of soldiers from the 101st Airborne Division. It is a week before Christmas and they are eagerly anticipating some R&R in Paris, but their plans are changed when they receive orders to move to Belgium in response to the German counterattack which came to be known as the Battle of the Bulge. Although they are part of an airborne division, they will spend the next week firmly tethered to the nearly frozen earth.

The members of the platoon include the fun-loving Holley (Van Johnson); the grizzled Sergeant Kinney (James Whitmore); Roderigues (Ricardo Montalbon), a Mexican-American from California; Jarvess (John Hodiak); Layton (Marshall Thompson), a new replacement; Kippton (Douglas Fowley), a private who keeps losing his false teeth; Bettis (Richard Jaeckel), a soldier who is suffering from combat fatigue; and “Pop” Stazak (George Murphy), the oldest member of the platoon and who is expecting orders sending him home because of his wife’s illness. James Arness also has small role.

The platoon had anticipated that its combat days were over, but the soldiers dutifully climb into trucks for a long and bumpy ride to Bastogne, Belgium. There they are greeted by Denise (Denise Darcel), a resident who offers to put them up in her house for the night. The next morning they are ordered to march to the front lines in the forest east of the city. Finding a suitable bivouac area, they spend hours digging foxholes only to be told to move to another location. As the weather gets colder a thick fog rolls in over the area, and eventually it becomes apparent that the German forces are much stronger than anyone anticipated.

Bastogne is a strategic city because it is the junction of seven important roads which make it a jumping-off point toward Antwerp on the North Sea. The capture of Antwerp is Hitler’s objective, and Bastogne stands in the way. Not only are the American soldiers outnumbered, they begin to run low on ammunition, food and medical supplies because the persistent fog and snow prevent C47s from flying in supplies and keep fighter planes and bombers from providing air support. Eventually Bastogne is surrounded and General von Lüttwitz gives the Americans two hours to surrender or be annihilated.

Battleground is a serious film which pulls no punches about the arduous conditions which the Americans have to endure. They have occasional skirmishes with German patrols and must be on the lookout for snipers. Staying dry and warm is virtually impossible, with frostbite an ever-present threat. The wounded are taken to a makeshift hospital which has run out of morphine, and no relief is in sight as long as the weather remains miserable.

The Academy Award-winning screenplay for Battleground was written by Robert Pirosh, who based it in part on his own experiences as an infantryman during the Battle of the Bulge. Several of the cast members were combat veterans, including James Whitmore, Douglas Fowley and James Arness. Van Johnson is fine in the lead role of Holley, but the film is really an ensemble achievement with excellent performances being turned in by the entire cast. Director William Wellman focuses more upon the travails of the men than the actual fighting, but he avoids most of the usual clichés and unnecessary romantic interludes.

Battleground has been given loving treatment with this excellent Blu-ray from the Warner Archive and it is highly recommended. An interesting trivia note is that the film was originally in development by RKO, but Howard Hughes vetoed it, apparently because he believed that the public had grown weary of war films.

The 1.37:1 black and white image is delivered in 1080p via the AVC codec. The result is nothing less than superb. Although the original camera negative has been lost, this Blu-ray transfer was made from a fine grain safety master and it looks terrific. A pleasing amount of film grain has been retained; the picture is highly detailed, with both contrast and black levels being excellent. There is no evidence of any age-related damage, dirt, or other anomalies to detract from you viewing pleasure.

Paul Vogel’s outstanding cinematography won an Academy Award, and the film probably should have won an award for set design because it is hard to believe that many of the outdoor scenes were filmed on soundstages. Our resident expert, Robert A. Harris, says that “it looked so pristine and proper, that had I not known otherwise, I’d have been willing to bet that it was a 4k scan harvested from the original nitrate negative.” See his full review here:

A few words about…™ Battleground — in Blu-ray

The English DTS HD-MA 2.0 audio is delivered flawlessly. Every word of dialog is clear and understandable, and the action scenes are loud and impressive. The soundtrack is very clean, with no discernible noise or distortion.

East-to-read English subtitles are available for those who need them.

The extras on this Blu-ray disc include a funny Technicolor cartoon by Tex Avery, “Little Rural Riding Hood.” The wolf is chasing Red Riding Hood when he receives an invitation from his cousin to come to the city. “Let’s Cogitate” is a black and white Pete Smith short which asks “Have you ever wondered?” about various topics.

The only other extra is the two-minute theatrical trailer for Battleground. The trailer has some speckling but otherwise is in fine condition. 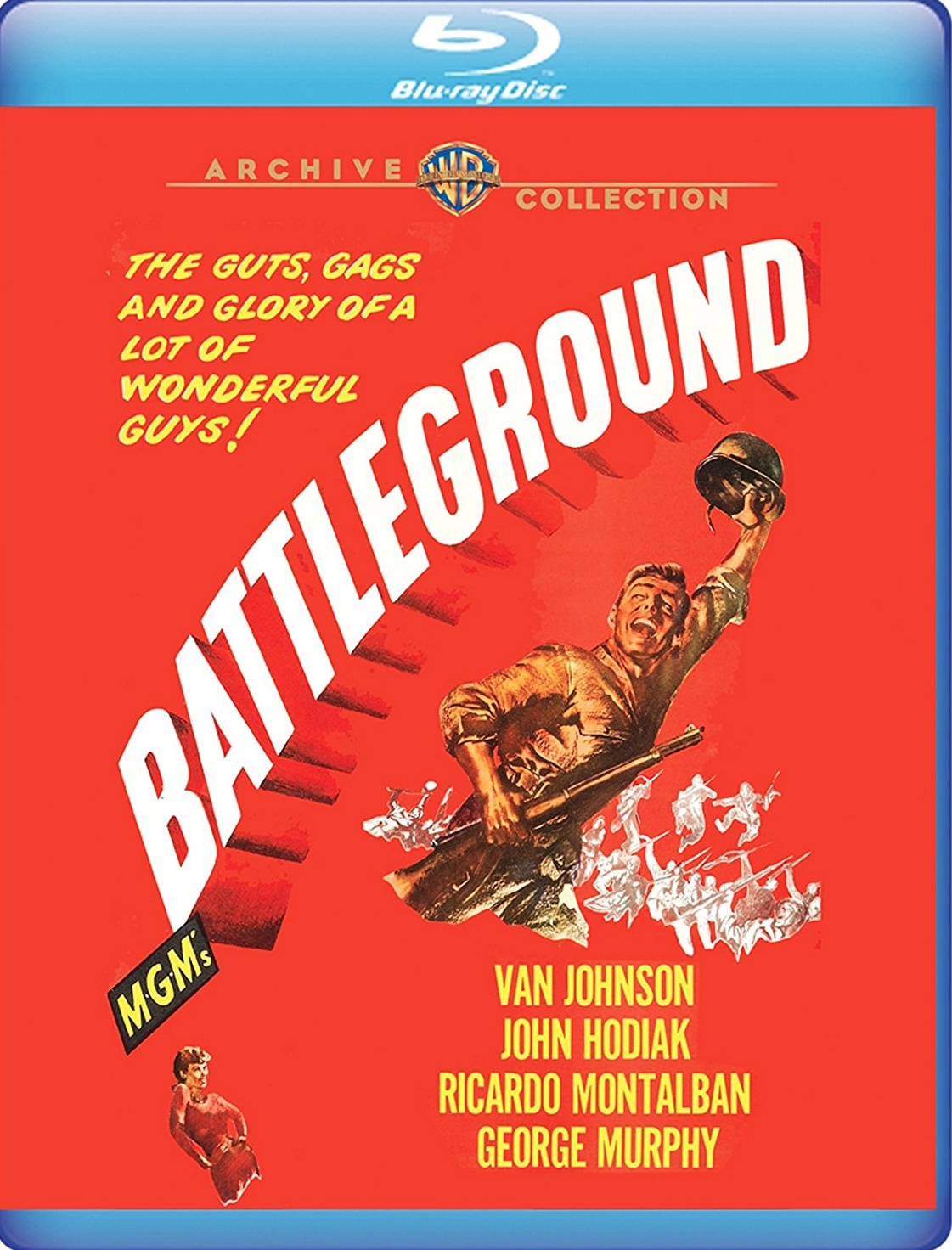