Was that over the top? I can never tell. – The Riddler (Jim Carrey) 4.5 Stars

Batman (Val Kilmer) has his hands full to overflowing in this third film, initially dealing with a constant stream of crimes by Harvey Two-Face (Tommy Lee Jones) and later dealing with another arch enemy, Bruce Wayne’s former employee Edward Nygma (Jim Carrey) who in his psychotic madness to invade the minds of the populace becomes the Riddler. Once Two-Face and the Riddler join forces, Batman has no alternative than to accept the help of recently orphaned Dick Grayson (Chris O’Donnell) who has recently become his ward. On the romantic front, Batman is involved in a romantic triangle with himself as Bruce Wayne and Dr. Chase Meridian (Nicole Kidman).

Joel Schumacher’s first venture into the world of the Dark Knight has a hyperactive, carnival-like atmosphere that’s loud, colorfully vulgar, and somewhat off-putting. Once again, the story is overcrowded with villains and a bothersome love interest (though Kidman is ravishing) plus the addition of Robin (the best addition to this world with O’Donnell underplaying and stealing the picture from the likes of the monotonously overacting and exhaustively hectic Jim Carrey and Tommy Lee Jones). It’s a decidedly different take on the world of Gotham City, and with judicious cutting and better plotting, it might have been a fun venture and a viable alternative to Burton’s world view of the material. As it is, though, it’s a manic mess.

To add to Matt’s review, this is a much campier take on Batman than the two previous entries directed by Tim Burton, and it’s not just the villains who are cracking one-liners. Alfred and Batman’s first exchange in the movie, for example:

Alfred: Can I persuade you to take a sandwich with you, sir?

When I first viewed Batman Forever upon its initial theatrical release, I thought Val Kilmer turned in an interesting take on the roles of Bruce Wayne and Batman, although with this more recent viewing, some of his more serious lines had me almost laughing to myself, picturing his Nick Rivers from Top Secret reciting those same lines. At least Kilmer puts in a better performance than George Clooney.

Joel Schumacher’s vision of Gotham City is much more colorful than Tim Burton’s, and it is those vivid color schemes against a mostly black background that make Warner’s new 4K transfer with HDR10 really stand out. Detail is excellent, from the colorful scarring on Two-Face to the sequins of The Riddler’s final costume. Much of that also translates to the included Blu-ray disc, which was struck from the same 4K transfer (but downscaled, obviously, to 1080p and no HDR), which at press time is only available in this 2-disc set.

Warner’s new Dolby Atmos mix (which is the default track, for a change) is a delight, sound cues are more discretely placed and sounds move seamlessly from one end of the room to another. LFE is strong, with Elliot Goldenthal’s Elfman-esque score receiving a nice low-end boost as well as explosions and crashes. Heights are used sparingly, more to provide a sense of immersion than any noticeable discrete effects. I wouldn’t say it is a demo-worthy track, but it is an improvement over the original (and included) 5.1 mix.

Although no new special features have been created for this release, it does include all of the features included on the previous Blu-ray release. The UHD disc contains only the audio commentary as a bonus feature, everything else can be found on the included Blu-ray in standard definition.

Deleted Scenes (480i; 13:33): Includes Escape from Arkham, Two-Face’s Hate, Beauty and the Batman, Dick’s Pain, Bruce’s Dilemma, The Secret of the Batcave, and Does It Ever End?

If you are a fan of this film, then this is a must-have upgrade whether you have upgraded to 4K or not.

Todd - thanks for posting these!
I love all 4 of these films and I watch them every year.
Reactions: English Invader and Todd Erwin
E

I still enjoy the Schumacher films as well. I can't deny that Batman and Robin seems quite dated by today's standards; even more so than the 60s TV series because some of the 60s episodes have some quite penetrating social commentary that still holds up today; B&R doesn't have anything like that to make it endure.

Batman Forever doesn't seem dated to me at all. A talent like Jim Carrey is timeless and I feel that all the actors/actresses in BF made more of a mark than in B&R. It just felt like an altogether more powerful film.
Reactions: Osato

English Invader said:
Batman Forever doesn't seem dated to me at all.
Click to expand...

I think I have a different definition of "dated" than you!

For a very long time, this was my preferred Batman movie. It had the humor (groan worthy as some of it may be), it was colorful, it had action and it had Chris O'Donnell. It's not my Go To Batman anymore, but I still admire what it did and the way it looks. Is it perfect? Nope. But it's a fun movie in my book.
Reactions: Osato and Malcolm R

Jason_V said:
and it had Chris O'Donnell
Click to expand...

Jason_V said:
For a very long time, this was my preferred Batman movie. It had the humor (groan worthy as some of it may be), it was colorful, it had action and it had Chris O'Donnell. It's not my Go To Batman anymore, but I still admire what it did and the way it looks. Is it perfect? Nope. But it's a fun movie in my book.
Click to expand...

Agreed Jason!!!
Reactions: Jason_V
You must log in or register to reply here. 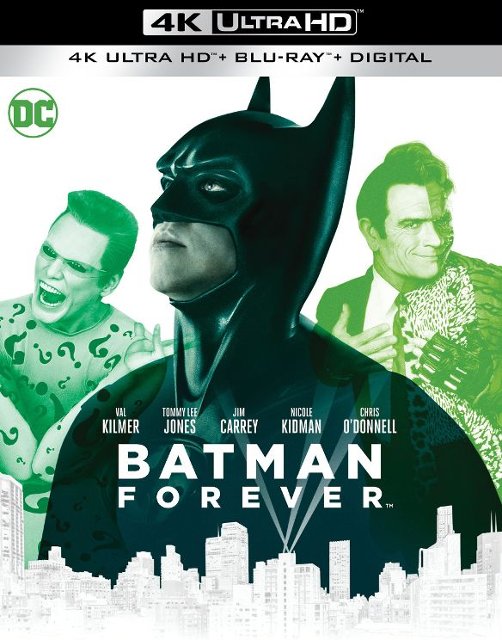