If watching a wasted Matthew McConaughey strut around southern Florida drinking beer and smoking marijuana while being lude and crude to everyone he meets for 95 minutes sounds like fun, then The Beach Bum is definitely for you.

Where do I begin? My summary above pretty much says it all about writer-director Harmony Korine’s The Beach Bum. Matthew McConaughey plays Moondog, a washed up poet who has been working on his latest collection while wasting away in Key West, smoking pot and chugging Pabst Blue Ribbon while hitting on and often succeeding with the ladies. He gets a phone call from his wife, Minnie (Isla Fisher), asking him to come home to Miami to attend their daughter’s wedding. He arrives, they get it on while making the final preparations for the wedding, and at the reception, Moondog finds out that Minnie has been two-timing on him with their neighbor and emcee for the wedding, Lingerie (Snoop Dog). Moondog is so stoned that it doesn’t even phase him, and he joins Minnie on a drunken spree thru the beachfront bars of Miami until Minnie is killed in a DUI. Moondog is then sentenced to mandatory rehab (and that is all), but escapes with the help of Flicker (Zac Efron). Moondog finishes his book, receives his share of the inheritance from Minnie (despite being a felon on the run), and then does exactly what Minnie feared he would do with her money – blows it all on drugs, booze, and fireworks. Jonah Hill shows up briefly as Moondog’s impatient agent, Martin Lawrence cameos as the captain of a dolphin excursion boat, and Jimmy Buffett has a few cameos as himself.

The Beach Bum plays like a bad comedy skit that relies too much on improvisation that often falls flat on its face. Moondog is a jerk, and not even a charming somewhat likable one. Perhaps Harmony Korine’s real joke is on the audience, laughing at anyone who got suckered into seeing this complete piece of junk. If I could, I would have awarded the film only 0.5 out of 5.

IMDB claims that The Beach Bum was shot on 35mm film and completed as a 4K digital intermediate. Whatever. Universal’s 1080p AVC-encoded transfer captures cinematographer Benoît Debie’s colorful southern Florida underground with rich vibrancy. Detail is strong, revealing textures in the odd bits of clothing worn by McConaughey and other characters. There is some minor noise or crush in blacks during some of the darker night time sequences, but nothing to get overly excited about.top

The Beach Bum arrives with a single DTS-HD MA 5.1 track that makes good use of the music featured in the film, spreading it nicely across the entire listening area. Dialogue is clear and understandable (when it is supposed to be, I guess), and LFE helps to give the music a nice low end.

Greenband Trailer (1080p; 2:28): Despite the greenband, there is still quite a bit of profane language to be found here.

The Beach Bum has to be one of the worst movies I’ve seen in a long time. Like I said at the outset, if watching a wasted Matthew McConaughey strut around southern Florida drinking beer and smoking marijuana while being lude and crude to everyone he meets for 95 minutes sounds like fun, then The Beach Bum is definitely for you. 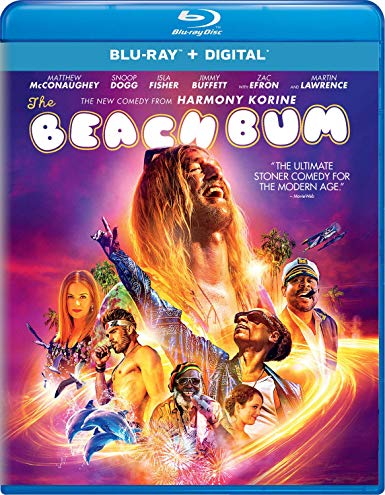