Forum List What's new Dark Style Change width
Log in Register
What's new Search
Menu
Log in
Register
Navigation
Install the app
More options
Dark Style
Close Menu
Posted on September 26, 2018 by t1g3r5fan
You are using an out of date browser. It may not display this or other websites correctly.
You should upgrade or use an alternative browser.
Excellent upgrade of Andrei Tarkovsky masterpiece 5 Stars

After establishing himself with an auspicious debut in Ivan’s Childhood (1962), Russian filmmaker Andrei Tarkovsky set his sights on an ambitious followup project – the life and times of the 15th Century Russian icon painter Andrei Rublev. The film encountered a long and arduous journey, marked by issues with censorship and the Soviet authorities that kept the film from distribution for five years when it was finally completed, but the final result is one of the most enigmatic and spiritual films ever made in world cinema. Criterion made this one of their earliest releases in the early days of DVD, but has revisited it with a stellar package.

In lieu of a traditional plot, the movie is divided into two parts with a prologue, seven chapters, and a epilogue encompassing twelve years in the life of Andrei Rublev (Anatoly Solonitsyn). As a witness to the divide between paganism and Christianity as well as the external (the Tatar invasions) and internal (the power struggle between the Grand Prince and his twin brother) conflicts that marked medieval Russia, the painter himself is faced with a struggle of his own: should he himself be part of this upheaval or should he simply record it with the brush? After his religious icons in one cathedral is tarnished by the Tatars, he loses faith in his ability and forsakes painting altogether with a vow of silence. It’s only after he witnesses the trials of a young man (Nikolay Burlyaev) casting a bell for the Grand Prince is his faith in his work restored.

While little is known about the life of Andrei Rublev, Andrei Tarkovsky (and screenwriter Andrei Konchalovsky) took what they gathered from research and created a speculative story steeped in the mysticism that marked the country at the time of the painter’s existence. Struggles that are psychological, spiritual, and physical play out in a medieval landscape that is both harsh and dreamlike. Tarkovsky fills the screen with poetic imagery that helps in this ideal: we see naked pagans with torches running through a thicket to celebrate an old ritual, snow falling inside a cathedral with victims of a Tatar raid strewn about, and forest floor teeming with water snakes and ants yields the decaying carcass of a swan, just to name a few. The reality portrayed here is a product of both historical evidence and of imagination, further yielding the highly spiritual qualities that have helped the movie become among the greatest in the many years that followed.

As it was mentioned earlier, the movie experienced a troubled history in terms of it being released. When production began in 1964, the USSR was still in the midst of a cultural thaw; by the time it was completed in 1966, the thaw froze over, evident over the Communist Party’s chilly reception to the movie when it was screened in its original 205 minute version. While it received a great reception from the audience, party members were shocked by the content of the movie and shelved it. After 22 minutes were trimmed and a few screenings in the Western world, which were highly acclaimed, the authorities finally relented and released the film in the Soviet Union in 1971; when the movie finally reached America in 1973, Columbia Pictures trimmed an additional 20 minutes from the movie, creating a version that was ill-received by critics. The film’s reappraisal began when Martin Scorsese came across a film print of the movie during a trip to Russia and brought it to the attention of Criterion; that print happened to be the original 205 minute version that one of the editors secretly kept under their bed. Since then, it has constantly been highly praised as one of the greatest films in world cinema.

I couldn’t let this review end without mentioning the contribution of actor Anatoly Solonitsyn, at that time a little known actor of the stage who made his feature film debut portraying Rublev. His portrayal of the painter is remarkable, balancing the spiritual and psychological complexities of the part in near perfect alignment; it’s one of those performances you don’t soon forget once you see it, just like Maria Falconetti in The Passion of Joan of Arc (1928). It was a bold choice that payed off on the part of Tarkovsky, who would later cast Solonitsyn in later projects like Solaris (1972), The Mirror (1975), and Stalker (1979). He would’ve likely appeared in Tarkovsky’s Nostalghia (1983) and The Sacrifice (1986) had cancer not taken him from us at the relatively young age of 47 in 1982.

The director’s preferred 183 minute cut of the movie, presented in its original aspect ratio, shines in a stellar digital restoration carried out by Mosfilm. Grayscale is strong, with crushed and inky blacks along with strong fine details and shadows. With additional restoration work carried out by Criterion, there nary an instance of scratches, splicing, dirt, dust, or damage visible. Best of all, it retains the film like grain, so it’s definitely not like one of the DNR’ed to death transfers one might expect from a digital restoration. A stellar job that deserves praise for everyone involved.

The original mono soundtrack is preserved in an uncompressed DTS-HD Master Audio track. Like the transfer itself, this is a stellar job well done, with nary an instance of popping, crackling or hissing evident. Dialogue is strong along with clear fidelity for the music and sound effects. This represents the best the film has ever sounded on home video.

The Passion According to Andrei – The original 205 minute cut of the movie is presented on a separate second disc.

The Steamroller and the Violin (45:26) – Tarkovsky’s student thesis film, the tale of an unlikely friendship between a young musician and a steamroller operator, was his first commercially released film; it also had a couple of crew members who would work with him on Andrei Rublev.

The Three Andreis (18:51) – A short documentary taken from the set of Andrei Rublev, featuring interviews with actor Anatoly Solonitsyn, Andrei Tarkovsky, and screenwriter Andrei Konchalovsky, the latter seen directing another movie around the same time as Andrei Rublev.

On the Set of “Andrei Rublev” (5:20) – Silent color behind-the-scenes footage of the set.

Robert Bird interview (37:00) – An in depth analysis of the movie by the film scholar, who previously wrote a monograph on the film for the BFI.

Select-scene commentary by Vlada Petric – Carried over from the 1998 Criterion DVD, the Harvard film professor dissects key scenes of the movie in this informative track.

Inventing Andrei Rublev (12:58) – In this video essay, filmmaker Daniel Raim breaks down the movie and how it fits within Tarkovsky’s unique style of filmmaking.

Fold out insert w/ an essay by J. Hoberman & published comments by Tarkvosky

A couple of special features not carried over from the original Criterion DVD are an interactive timeline of events of Russian history – including the works of Andrei Rublev and Andrei Tarkovsky – and a video essay by Vlada Petric which included interviews with Tarkovsky recorded on the set.

While it took some time to reach legendary status, Andrei Rublev firmly established Andrei Tarkovsky on the world cinema stage and would lend further credence to his status as a master filmmaker, reaffirmed with the likes of Solaris and Stalker. Criterion’s stellar edition, which includes both the director’s preferred 183 minute cut and the original 205 minute version of the movie, is loaded with great special features that easily blows their previous DVD edition out of the water in every department. By far the best upgrade/revisit Criterion has done this year, so pick up a copy and witness for yourself.

The best possible review! There are arthouse fans lurking around this site, who are well aware of this masterpiece. However, the uninitiated should, to quote Anthony Lane's review in The New Yorker three weeks ago: "gird their loins, down a Stoli for luck, and give “Andrei Rublev” a chance. You may dread being ground down by this extraordinary film, but fear not. It will bear you aloft."

Amazon.com is listing the Blu-ray with a runtime of 185 minutes, not the original 205 minute version that is mentioned in the review.

Paul Hillenbrand said:
Amazon.com is listing the Blu-ray with a runtime of 185 minutes, not the original 205 minute version that is mentioned in the review.

They're listing the runtime for the director's preferred version that's on the first disc of the Blu-ray; the original 205 minute cut is on the second disc.
You must log in or register to reply here. 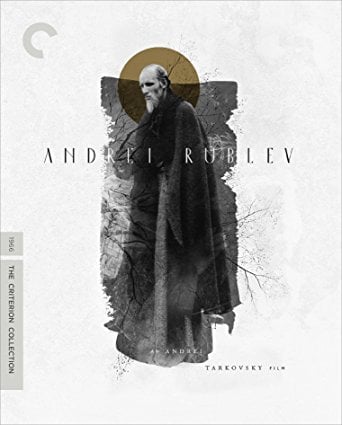