Not particularly original but certainly filled with laughs and tears appropriate to a seasonal holiday dramedy, David E. Talbert’s Almost Christmas scores its myriad effects in spite of itself.

A dysfunctional family at holiday time? There have only been several dozen movies with that particular theme, and the movie’s quality inevitably depends on the dynamics of the individual family members and how well all of the comedic and dramatic elements can be combined to hold the viewer’s interest. David E. Talbert’s Almost Christmas certainly breaks no new ground, and one can practically plot out various family threads long before they ever transpire. Yet, the film has heart to it and is blessed with some fine, funny performers who keep things even at their most hackneyed lively and fun.

The first Christmas after the death of his beloved wife Grace finds widower Walter Myers (Danny Glover) struggling with a decision to sell the family home, trying to replicate his wife’s very special sweet potato pie, and attempting to keep the peace among the four Myers offspring, their spouses and children, and the unbridled Aunt May (Mo’Nique) who has left her current road tour as a backup singer to serve as distaff family matriarch in lieu of her deceased sister. Of course, each of his grown children brings his or her own problems to the gathering: older son Christian (Romany Malco) is running for office on a platform that may get him elected but will run headlong into his father’s interests, daughters Cheryl (Kimberly Elise) and Rachel (Gabrielle Union) have never gotten along and can hardly be civil to one another, and college senior football star Evan (Jessie T. Usher) is coming back from injury and hooked on prescription pain medication.

Writer-director David E. Talbert hasn’t written a very original framework for the film (he himself admits that the idea for his opening montage covering the married life of the loving Myers from 1971-2016 was borrowed from Up), and the character dynamics couldn’t be more predictable: sisters Cheryl and Rachel will spend the movie at each other’s throats until something happens to bond the family together; Rachel’s childhood sweetheart Malachi (Omar Epps) who broke her heart on prom night now reappears, and we know they’ll spar the entire movie and eventually get together; both Christian and Evan’s secrets from their dad will come to a head and eventually get resolved, all of this over the five-day narrative period of the movie. There are some other threads that peter away: there’s much early discussion about Grace’s missing recipe tin that held her prize kitchen concoctions, but it’s simply in a kitchen cabinet we learn later in the movie. Didn’t anyone think to look in a kitchen cabinet for a recipe box? Cheryl’s husband Lonnie (J.B. Smoove) has a roving eye that catches up to him at Christmas day dinner. And the three children present for the festivities (Nadej Bailey, Alkoya Brunson, Marley Taylor: all appealing and all underused) have that sage wisdom granted to movie children: they’re far more grounded and insightful than any of the adults. Yet, two scenes do stand out: Aunt May’s solo prepared luncheon as she explains the origins of the exotic dishes to her disbelieving family and then explodes when no one’s interested in tasting them, and a spontaneously joyous dance jam in the kitchen in which the cast looks as if they’re having the time of their lives.

Oscar-winner Mo’Nique simply walks away with the movie. Whether putting anyone and everyone in his place when he or she needs a smackdown or speaking knowingly and lovingly to family members in need of a shoulder on which to lean, she’s the film’s ace in the hole. Danny Glover seems to have regained some of the power and poise of his earlier career as Walter (in his last few films, he’d seemed frail and breathless), and Romany Malco as Christian, Omar Epps as Malachi, and Jessie T. Usher as Evan all do solid work dramatically not being given much in the comedy department. J.B. Smoove continues his motormouth persona as Lonnie who’s more talk than show. Though Nicole Ari Parker as Christian’s wife Sonya is rather lost in the mix of movie personalities, both Kimberly Elise and Gabrielle Union acquit themselves nicely as the battling Myers sisters. John Michael Higgins as Christian’s campaign manager Brooks is often clueless and impractical as he ad-libs much of his dialogue trying to fit in with the crowd.

The film’s 2.40:1 theatrical aspect ratio is faithfully rendered in this 1080p transfer using the AVC codec. Sharpness is outstanding, and color is bright and beautiful with accurate and appealing flesh tones. Contrast has been consistently applied for a first-rate image. The movie has been divided into 20 chapters.

The DTS-HD Master Audio 5.1 sound mix is typically frontcentric for a comedy with the exception of the plethora of pop and holiday tunes on the soundtrack and John Paesano’s jovial background score. Occasional atmospheric effects (a plastic, motorized Santa that begins to spark out, reminiscent of National Lampoon’s Christmas Vacation, racing in a car through city streets at high speed) also get split surround placement, but their use is sporadic.

Audio Commentary: writer-director David E. Talbert, film editor Troy Takaki, and assistant editor Gene Lewis Jr. combine in a love fest of praise and accolades for all of the cast and crew as they reminisce about the production of the movie.

Even More Gags (3:10, HD): the movie ends with outtakes and ad-libs by the cast, and this bonus contains more gag reel excerpts.

Home For the Holidays (18:32, HD): five featurettes that give a behind-the-scenes look at the production of the movie. Contributing to the story of its making are writer-director David E. Talbert, producers Will Packer and Lyn Sisson-Talbert, composer John Paesano, and actors Danny Glover, Omar Epps, Mo’Nique, Romany Malco, Nicole Ari Parker, J.B. Smoove, Gabrielle Union, and Jessie T. Usher.

The Director Diaries (4:26, HD): behind-the-scenes looks at highlights of the thirty-seven day shoot with voiceover by director David Talbert.

My Favorite Scene Is… (4:24, HD): the climactic dinner scene where all secrets come to the fore remains the film’s high point for many of the cast and crew.

Not particularly original but certainly filled with laughs and tears appropriate to a seasonal holiday dramedy, David E. Talbert’s Almost Christmas scores its myriad effects in spite of itself. A first-class Blu-ray release certainly is no hindrance in making it an appealing choice for a high-spirited rental. 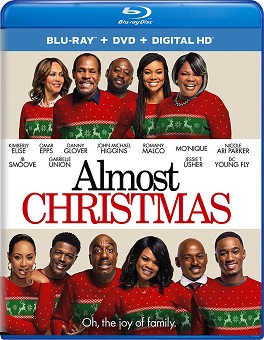