Forum List What's new Dark Style Change width
Log in Register
What's new Search
Menu
Log in
Register
Navigation
Install the app
More options
Dark Style
Close Menu
Posted on February 6, 2017 by Richard Gallagher
You are using an out of date browser. It may not display this or other websites correctly.
You should upgrade or use an alternative browser.
A suspenseful Japanese thriller comes to Blu-ray from Twilight Time 4 Stars

It is impossible to watch the 1975 Japanese film The Bullet Train (aka Shinkansen daibakuha) without concluding that it was the inspiration for the 1994 blockbuster Speed. The Bullet Train, which in some respects is superior to Speed, was originally released in the United States in a dubbed and severely edited version, but Twilight Time has now released the original Japanese cut on Blu-ray.

The Bullet Train opens at night in a train yard in Hokkaido, Japan. A young man named Masaru Koga (Kei Yamamoto) carefully makes his way to an idle freight train and attaches a device to the underside of the locomotive. Shortly thereafter he places to phone call to Tetsuo Okita (Ken Takakura, one of Japan’s most celebrated movie actors), who apparently is living in an abandoned factory in Tokyo. Okita awakens and answers the phone, asking Koga “How did it go?” The young man responds, “It went well” and informs Okita that he is catching a plane in a few hours. “I see,” says Okita. “Everything is done, then.”

By “everything” he means a diabolical scheme to plant bombs on two trains – the aforementioned freight train and a high-speed 1,500-passenger “bullet train” which cruises at 210 kilometers/hour. These are no ordinary bombs. Using tachometers which his now-defunct company built, Okita has figured out how to rig them with dynamite so that they will be activated when the trains speed up and will detonate when they slow down. The plan is to demand a $5,000,000 ransom (yes, in American dollars) from the Japanese government. If the ransom demand is not met the bullet train will explode, likely killing everyone on board. The freight train bomb has been planted as a demonstration to prove that the ransom demand is not a bluff.

The bullet train bomb is installed by Hiroshi Ôshiro (Akira Oda), another young man who was down and out before he was befriended by Okita. Oshiro also has been designated to be the pick-up man if and when the ransom is paid. The train’s engineer is Aoki (martial arts star Sonny Chiba, here billed as Shin’ichi Chiba), who takes it in stride when he first learns about the bomb. Such threats have occurred before, and the usual protocol is to stop the train and conduct a search. His demeanor turns to near panic when he is told that stopping the train will set off the bomb, but he does manage to regain his composure. The train’s conductors institute a search which is so thorough that it beings to alarm the passengers, who are a diverse group. Among them is a pregnant woman who is married to a railroad employee, a prisoner who has a minor connection to the bombers who is in the custody of police for an unrelated offense, and overwrought businessmen who are enroute to important meetings that they will have to miss because the train cannot make its scheduled stops. As Julie Kirgo points out in her essay about the film, “no nation does better cinematic mass hysteria than the Japanese.”

As the story unfolds we are treated to some terrific visuals, including near collisions on the tracks, an exciting motorcycle chase, and a clever plan to pick up the ransom money which includes a helicopter, a car, and a boat. However, be warned that The Bullet Train is surprisingly long for a thriller, running a full 152 minutes, because director Junya Sato uses flashbacks to fill in the back story of Okita and his accomplices. This technique slows things down, but it also causes us to feel some empathy for Okita, who during the previous year lost his business and then was divorced by his wife, who took their son with her. Okita also intends that his plot will be bloodless – if the ransom is paid, he fully intends to tell the authorities where the bomb is and how to disarm it. He therefore is a far more sympathetic character than Howard Payne in Speed.

That said, it is easy to see how the U.S. theatrical release (which I have not seen) likely was pared down to 115 minutes simply by eliminating 30 minutes or so of character development. Some viewers might prefer to stick with the action sequences, but the additional exposition gives us more opportunities to watch Ken Takakura, an imposing screen presence who also can be seen in The Yakuza, a new Blu-ray release by the Warner Archive. Takakura, like Clint Eastwood, can express more with his face than many actors can with words. In any event, The Bullet Train is very suspenseful and exciting, creating a terrifying but plausible scenario which has many twists and turns.

The Bullet Train comes to Blu-ray in 1080p via the AVC codec, and it is properly framed at 2.35:1. The picture is generally quite sharp, although there is some occasional softness which may have been deliberate. Zooming in for close-ups was a popular but annoying technique (to me, at least) in the seventies, and cinematographer Masahiko Iimura probably would do it less if he had it to do over. The color palette is accurate but somewhat muted, with much of the exterior action taking place under mostly overcast skies. A natural level of film grain has been retained to give the transfer a film-like appearance. There is no evidence of dirt, speckling, film damage, or other age-related anomalies.

The only audio option is Japanese 1.0 DTS HD-MA, with available subtitles that are easy to read. The mono sound is of course limited, but the explosions and gunshots have some punch. The music score by Hachirô Aoyama has a distinctively seventies feel to it.

The extras on this Blu-ray release include an isolated music and effects track, as well as an original 25-minute featurette entitled “Big Movie, Big Panic: Junya Sato on The Bullet Train.”

Also included is an eight-page booklet with an essay by Julie Kirgo in which she justifiably sings the praises of the lake Ken Takakura.

Many of our readers probably have never heard of The Bullet Train (a search for reviews by American critics turned up nothing), but it is a worthy thriller which deserves an audience. Readers who are interested in purchasing it can find it at the Twilight Time website or the Screen Archives website. 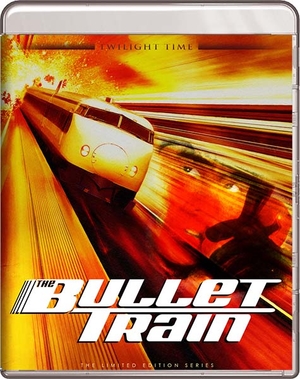