Forum List What's new Dark Style Change width
Log in Register
What's new Search
Menu
Log in
Register
Navigation
Install the app
More options
Dark Style
Close Menu
Posted on September 26, 2019 by Todd Erwin
You are using an out of date browser. It may not display this or other websites correctly.
You should upgrade or use an alternative browser.
Clever re-invention of the road movie 4 Stars

As a tie-in for the upcoming sequel, Sony has released Zombieland on 4K UHD Blu-ray that benefits just enough to warrant an upgrade for fans.

The zombie apocalypse has begun. Columbus (Jesse Eisenberg), a still-human survivor, is travelling cross-country in search of his estranged parents in hopes that they, too, have survived. He’s a nervous geek, with a long list of rules on how to survive in what he refers to as the United States of Zombieland, which include Cardio, Check the Backseat, Seatbelts, and Beware of Bathrooms (all of which humorously appear as on-screen text). He meets up with zombie slayer Tallahassee  (Woody Harrelson), who reluctantly agrees to give Columbus a ride to the eastern US. Along the way (stopping to kill zombies, of course), they meet up with two young women, Wichita (Emma Stone) and her younger sister Little Rock (Abigail Breslin). Unfortunately, these two women are con artists, who trick the two men into handing over their weapons and vehicle. The four meet up again, agree to call a truce, and head for an amusement park in Pacific Palisades, California rumored to be zombie-free. More adventures ensue, leading to a free-for-all climax at the amusement park.

Zombieland is one of the funniest zombie movies I’ve seen, period. There have been attempts to cash in on this relatively new sub-genre, but many have failed miserably (Scouts Guide to the Zombie Apocalypse easily comes to mind). Director Ruben Fleischer (an impressive debut and would later direct the disappointing Gangster Squad and Venom) and writers Rhett Reese & Paul Wernick (Deadpool) have a definite grasp of the material at hand, easily melding with much delight the traditional road movie with zombie lore. It’s also fun to watch Jesse Eisenberg, Emma Stone, and Abigail Breslin early in their careers, showing what talented performers they were at that stage and still are today.

Per IMDB, Zombieland was shot on film in Super 35mm using Arriflex 435 cameras with ultra slow motion sequences captured on the Panavision Genesis HD camera at 2K resolution, with the movie completed as a 2K digital intermediate. Sony’s 2160p upscale, which retains the film’s 2.39:1 theatrical aspect ratio, adds HDR10 color grading to the mix, offering a small but noticeable improvement over the then-excellent 2010 Blu-ray release. Colors, as subdued as they are following the typical post-apocalyptic look these movies often have, are a bit more nuanced, offering more natural shading, than seen on the Blu-ray. Contrast is improved, toning down a few of the very obviously blown out shots (in particular, the wedding scene from the opening title sequence), and also offering better shadow detail during many of the night time scenes. It’s a subtle yet noticeable upgrade.

The new Dolby Atmos mix opens up the sound stage considerably, giving the track more room to breathe. Shot gun blasts and zombie attacks are positioned more precisely and flow more fluidly within the listening area. LFE is much stronger, too, adding an extra low-end enhancement to both the music featured in the film and the gunfire. Dialogue is clear and understandable throughout. Sony has included the original 5.1 mix in DTS-HD MA for those that prefer it.

Recently, Sony has been pretty good at including some new, exclusive features to its UHD releases of its catalog, and Zombieland has some really nice new extras. The remaining special features can be found on the included original Blu-ray.

UHD Disc:
Raised From the Dead: Zombieland, A Decade Later (1080p; 8:30): The cast and crew look back at the their experiences on the first film, answering questions submitted by fans, and ending with a clip from Zombieland: Double Tap.

Shootin’ Zombies with Director Ruben Fleischer (1080p; 20:05): Originally included as part of the bonus disc on the Best Buy exclusive Nut Up or Shut Up Blu-ray edition, Fleisher goes into great detail the making of the opening title sequence using the then-new Panavision Genesis HD camera which was capable of shooting up to 100 frames per second.

Behind the Scenes with the Cast and Crew of Zombieland (1080p; 7:27): Originally included as part of the bonus disc on the Best Buy exclusive Nut Up or Shut Up Blu-ray edition, the cast and crew discuss the “rules” established by Columbus, practical make-up effects, etc.

In Search of Zombieland

Zombieland is Your Land

Sony’s 4K UHD Blu-ray release of Zombieland receives a nice but subtle upgrade to its video and audio presentation, plus a few new and exclusive extras including a brief sneak peak at the new sequel.

Thanks for the review. As I don't already have a digital copy of this one I think I will go ahead and upgrade my existing Blu to the UHD.

Adam Gregorich said:
Thanks for the review. As I don't already have a digital copy of this one I think I will go ahead and upgrade my existing Blu to the UHD.
Click to expand...

I bought the 4K digital from Vudu that propagated over to iTunes in 4K too for $9.99 as I don't need another disc as I'm simply running out of storage room.

One correction... the Panavision Genesis is NOT a 2K camera.

Robert Crawford said:
I bought the 4K digital from Vudu that propagated over to iTunes in 4K too for $9.99 as I don't need another disc as I'm simply running out of storage room.
Click to expand...

I watched this film today and I forgot how funny it is.
You must log in or register to reply here. 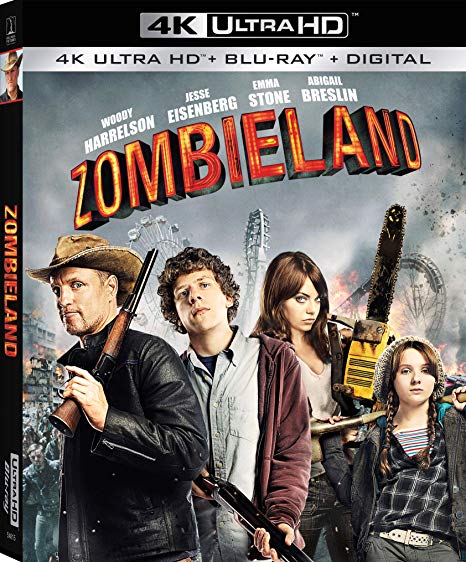