More of the same 4 Stars

After ten years, it’s a second trip to the well for Zombieland: Double Tap, recycling the same formula (and many of the same jokes) from the almost groundbreaking original.

Ten years have passed, and Tallahassee (Woody Harrelson), Columbus (Jesse Eisenberg), Wichita (Emma Stone), and Little Rock (Abigail Breslin) have made their way east, killing zombies along the way, and take up residence in the White House. Little Rock is beginning to realize she’s all alone, longing for friendships and possibly romance with someone her own age, and having Tallahassee as a surrogate father figure isn’t helping. Meanwhile, Columbus and Wichita’s relationship has reached something of a plateau, until Columbus proposes marriage. These two events prompt the girls to quietly leave the boys behind, driving away in Tallahassee’s Beast (a souped-up Secret Service Limo with gun turret). Depressed, the boys head to the abandoned mall to continue their battle against zombies, meeting Madison (Zooey Deutch) in the candle shop. Madison is not the sharpest tool in the shed (or as Tallahassee puts it, she’s survived this long on her own due to her lack of a brain) and decides to join the boys back at the White House. But Wichita has returned to raid the weapons closet, as Little Rock has now escaped and left with Berkley (Avan Jogia), a hippy they picked up along the way. Tallahassee, Columbus and Madison join Wichita as they head out for Graceland in hopes of finding Little Rock. Meanwhile, there is a new strain of zombie beginning to take hold, one that is faster and more clever than its predecessors, almost unkillable.

Zombieland: Double Tap works as a zombie comedy, mostly because it doesn’t take many chances, following the same formula of the first film. Unfortunately, it also recycles many of the same gags (including a slow motion opening credit sequence and its reliance on Columbus’ rules). And some of the new material nearly falls flat, such as the doppelganger gag which isn’t all that funny and really doesn’t add anything to the story. What does work remarkably well is the character of Nevada (Rosario Dawson), a romantic interest for Tallahassee who also has a love the Elvis and big guns. The character of Madison really doesn’t have much to do other than be both an annoyance and create friction between Columbus and Wichita, but the character is rather likable thanks to a vert ditzy  performance by Zooey Deutch.

Zombieland: Double Tap was captured at 3.4K resolution using Arri Alexa Mini, XT, and SXT camera, then completed as a 2K digital intermediate. Sony’s AVC-encoded 1080p transfer, which retains the film’s theatrical aspect ratio of 2.39:1, looks terrific. Colors are naturally vivid without appearing overly saturated – the Zombieland movies don’t go for the stereotypical monochromatic post-apocalyptic visual style like most movies in this genre. Detail is excellent, highlighting facial features, fabric textures, and some of the intricate makeup work on the zombies. Contrast is also exceptional, with deep inky blacks that never appear to crush yet retain a great deal of shadow detail, and bright whites that never appear to clip.

Sony has included a DTS-HD MA 5.1 track as default, and it is very good, but not quite as immersive as it could be (especially if the studio had included a DTS:X or Dolby Atmos option). Unfortunately, this is a somewhat front-heavy mix, although surrounds do kick in where needed. Dialogue is spread across the wide front soundstage, while music and sound effects are also directed to the rears. Surrounds are much more evident during zombie attacks, although some atmospheric effects can be heard during quieter passages. LFE is good, but not great, lending low-end support to music and effects but never quite as boomy as it could be.

Audio Commentary with Director Ruben Fleischer: The director goes solo this time out, discussing in great detail the development of the sequel and other aspects of production.

The Doppelgangers (1080p; 7:02): A detailed look at a joke that was already played out in the trailers.

A Day with Bill Murray (1080p; 3:11): A look at shooting Bill Murray’s flashback cameo that appears in the closing credits.

The Rides of Zombieland (1080p; 4:14): A look at the various customized vehicles from the movie.

DVD Copy: The movie in 480p with Dolby Digital 5.1 audio, plus The Rides of Zombieland, Rules for Making a Zombie Film, Making Babylon, New Blood, and Zombieland Ad Council.

Zombieland: Double Tap is a fun return of a dysfunctional surrogate family battling zombies, but it also feels too much like a retread of the original.

Thanks for the Blu-ray review. RAH stated the 4K/UHD release has DTS: X. while the 4K digital on iTunes has Dolby Atmos. I'll probably buy that as it's on sale for $9.99.
Reactions: dpippel and Todd Erwin
You must log in or register to reply here.
Share:
Facebook Twitter Reddit Pinterest Tumblr WhatsApp Email Link 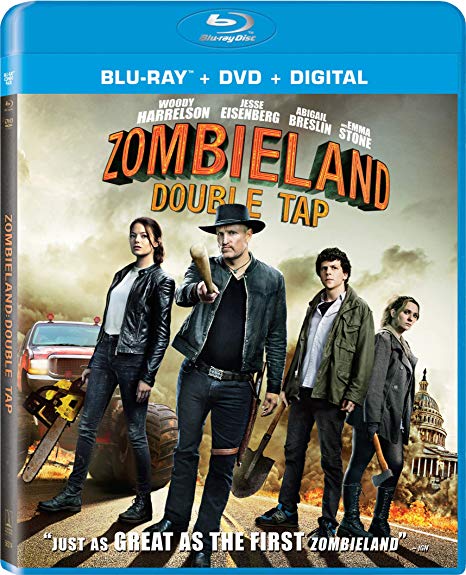