Forum List What's new Dark Style Change width
Log in Register
What's new Search
Menu
Log in
Register
Navigation
Install the app
More options
Dark Style
Close Menu
Posted on November 24, 2020 by Matt Hough
You are using an out of date browser. It may not display this or other websites correctly.
You should upgrade or use an alternative browser.
Charming comedy of an earlier era. 4 Stars

Gordon Douglas’ Zenobia is a charming, easygoing comedy from 1939, one of those golden movie years that boasted an uncommon number of memorable movies.

Doc Tibbett (Oliver Hardy) is a well-meaning country doctor living in 1870 Mississippi who now finds himself shunned by most of the town bigshots after their minds are poisoned against him by the haughty Mrs. Carter (Alice Brady) when he refuses to humor her hypochondria. Mrs. Carter’s handsome son Jeff (James Ellison) wants to marry Tibbett’s daughter Mary (Jean Parker), but his mother is determined to do everything in her power to steer him away from Mary and into the arms of the wealthy Virginia (June Lang). Meanwhile, Doc Tibbett has his hands full when he’s sent to treat an ailing elephant named Zenobia owned by carnival charlatan Professor McCrackle (Harry Langdon). Once he finds the source of Zenobia’s problem, he’s made a friend for life, but her enormous presence causes havoc in the doctor’s personal and professional life.

The screenplay by Corey Ford may be short on plot, but he’s filled it with a number of comic interludes which allow Oliver Hardy, Billie Burke (his wife), Step’n Fetchit and Hattie McDaniel (their servants), Harry Langdon, and Olin Howland (as attorney Culpepper) the chance to do some high class foolishness. Foremost among those scenes are a welcoming sequence involving a slamming door, some shenanigans in the kitchen as the airheaded Mrs. Tibbett keeps changing her mind about the food to be served at a dinner party, and Doc and McCrackle’s systematic examination of the ailing elephant. Later scenes in court as the lawyer and his crooked cohort attempt to get through his overly rehearsed testimony even once and a moving moment as a young black child (Phillip Hurlic) recites the Declaration of Independence also give purpose to the narrative, both comically and dramatically, and a surprise ending which almost disrupts the long-awaited nuptials ends the film on a delightful note. Throughout, Gordon M. Douglas directs with a sure but unshowy hand letting the lines, his expert comic actors, and the situations do the heavy lifting.

It’s refreshing to see Oliver Hardy acting a role without his longtime partner-in-crime. He can still do double takes and slapstick with the best of them, but his performance, even though he doesn’t even attempt a Southern accent, is a straightforward one. Billie Burke has never been more dithery and fluttery, absentmindedly jerking arranged flowers out of their vases and dusting banisters and crown molding while prattling on about something or other, all to great comic effect. Oscar-winner Alice Brady in her next-to-last film appearance is the film’s villainess, a vile snob out for vengeance, but her Southern accent slips in and out rather distractingly, and her last reel change of heart doesn’t quite ring true even if it does contribute to a happy ending. Harry Langdon gets some spotlight moments as Zenobia’s jealous owner suing Tibbitt for alienation of affection, but the fabled funnyman was never as effective in sound films as he was in silents. James Ellison, June Lang, and Jean Parker are all most attractive younger people involved in the love triangle, but they’re definitely of secondary interest compared to their elders even though Parker offers a lovely rendition of “In the Evening by the Moonlight.” Step’n Fetchit does his patented shtick, and Hattie McDaniel (whose name is misspelled in both the main and end credits) likewise does her stuff as a saucy cook.

The film’s original theatrical aspect ratio of 1.37:1 is faithfully rendered in this 1080p transfer using the AVC codec. Though you might catch a slight scratch here or there, for the most part the image is pristine: very sharp and with excellent grayscale which boasts deep, impressive black levels and crisp, clear whites. A restoration comparison bonus feature shows the deplorable original condition of the elements and the magnificent salvage job which has been accomplished here. The movie has been divided into 17 chapters.

The DTS-HD Master Audio 2.0 mono sound mix offers the well-recorded dialogue, Marvin Hatley’s background score, and the appropriate sound effects merged into a single, most effective whole. While there may be momentary scratchiness here and there, most of the age-related problems with pops, hiss, crackle, and flutter have been eliminated.

Restoration Comparison (5:15, HD): split scenes and before-and-after sequences illustrate the massive restoration which has been done to return this entertaining comedy into a very pleasing presentation.

Gordon Douglas’ Zenobia is a charming, easygoing comedy from 1939, one of those golden movie years that boasted an uncommon number of memorable movies. The new Classic Flix Blu-ray presents this little known Hal Roach comedy in superb fashion making it a movie worth discovering and celebrating. Recommended!

I saw this on TV way back in the 60’s as a little tyke And haven’t seen it since. You description of it being an entertaining little movie is just how I remember it. I can’t wait to see again. Thank for the review.
A

Thanks for the review. I remember seeing the film on TCM and enjoying it. Based upon this and The Fighting Kentuckian, Hardy likely would have had a long career as a character actor had he never teamed with Laurel. I was disappointed that it wasn't included as an extra in the Essential L&H DVD collection some years back, but having it on blu-ray now does make up for that.

Interesting that you mention that Hardy doesn't attempt a southern accent. Why should he? He already had one naturally due to his birth and upbringing in Harlem, GA. Granted, he seemed to have moderated it so it is somewhat subtle, but it's there if you listen carefully. Occasionally, he would play it up a bit more for comic effect like in the last scene of Way Out West as well as some portions of Jitterbugs.
H

Just goes to show that there's always more to learn about film history. Despite starring a number of people I've definitely heard of (so you'd think I'd have come across it at some point), I've never heard of this movie before!

This is the movie that caused the alleged friction between Stan & Babe Hardy in the recent biopic Stan & Ollie . The boys get into an argument in which Stan reveals his resentment that Ollie made this film with Harry Langdon when in reality he had no choice. Producer Hal Roach kept the team under separate contracts that expired at different times so he had control over the boys. Finally Stan refused to renew his contract when it expired in order to wait out Babe's
contract so they could re-negotiate as a team rather than as separate comics. Hardy had no real choice but to make the film as he was under contract , and in reality Stan would have known that and understood. Most L & H buffs feel this scene was manufactured for the film for some dramatic tension, as there are no real reports that the team ever had any serious conflicts.

Harold Chasen said:
Just goes to show that there's always more to learn about film history. Despite starring a number of people I've definitely heard of (so you'd think I'd have come across it at some point), I've never heard of this movie before!
Click to expand...

I was in the same boat. Maybe that's why it tickled me so much. To discover a film with this many famous people so late in my life was like uncovering a small vein of gold heretofore undiscovered.

I watched my copy last Friday and the film was just as charming as I remembered it from my childhood TV binge days. What a fun film. I also want to applaud ClassicFlix for their work on releasing a very fine Blu-ray. To me, it looks pristine. Which reminds me that I haven’t purchased a poor blu-ray from them yet.I’m looking forward to A Night In Casablanca.
You must log in or register to reply here. 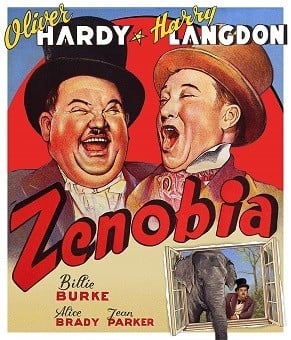