Z-O-M-B-I-E-S is a Disney Channel Original Movie that doesn’t try all that hard to put forth its message on segregation and racism, and instead wants to play it light while singing and dancing.

It was inevitable, with the zombie craze in movies and television, that someone at the Mouse House thought a zombie musical would be a good idea for a Disney Channel Original Movie. Director Paul Hoen (Camp Rock 2: The Final Jam, Invisible Sister) dusted off a screenplay for an unaired Disney Channel pilot (Zombies and Cheerleaders) by David Light & Joseph Raso (making this a remake of a movie deemed unwatchable by its studio), and threw in some forgettable musical numbers. Zed (Milo Manheim) is a teenage zombie, excited that zombies are finally being given the chance to go to school with the human kids from Seabrook and hoping to try out for the football team, nearly fifty years after the zombie apocalypse was triggered when someone spilled their lime soda on the control panel at the power plant. Although science was able to find a way to control the zombies from their hunger for human brains by forcing them to wear a Z-pack (which looks like an oversized Apple watch), they are still ostracized from society and must live in their own walled area known as Zombietown just on the outskirts of Seabrook. Addison (Meg Donnelly) is a human teenager in Seabrook who is excited to become a cheerleader at Seabrook High, even though she has a secret – she’s been wearing a blonde wig to hide her head of white hair that can’t be dyed. Zed and Addison meet and spark a friendship (and possibly more, but this is Disney Channel), despite the stereotypes and discrimination they encounter from their peers. Can both sides come together and work things out? Again, this is a Disney Channel Original Movie, so the ending is rather predictable.

My main issues with the film are the forgettable songs (although many of the dance numbers do have some energy to them), using musical numbers to pad the running time, and breaking the fourth wall as a way to replace scenes that were likely too expensive (or graphic) to show. I could be much more harsh on this film, and complain about how the movie doesn’t have Zed take full responsibility for his misuse of the Z-pack to win at football (that would open a big can of steroid worms), the missed opportunity (and explanation) of why Addison’s hair has been pure white since birth, or the fact that the zombies in this film are not even remotely frightening (not even in their appearance). Z-O-M-B-I-E-S is a by-the-numbers Disney Channel movie that is fairly harmless for kids aged 7 and up, but older audiences may find it too sugar-coated for its own good.

Although broadcast on The Disney Channel in 720p and currently available in HD on the Disney NOW app, Z-O-M-B-I-E-S arrives on physical media on DVD in 480p, retaining the movie’s broadcast aspect ratio of 1.78:1 thanks to anamorphic enhancement. for DVD, the image looks pretty good, even after being upscaled to 2160p by my Sony UBP-X800 UHD Blu-ray player. The pastel colors are vibrant without bleeding, and there appears to be more detail than one would typically expect from a DVD these days. There are some minor and occasional crushing and other compression artifacts, but nothing to get too overly excited about.

Z-O-M-B-I-E-S has been provided a Dolby Digital 5.1 track, encoded at 384 kbps. For a lossy track at the lower end of the bitrate scale, this is still a pretty decent track. Dialogue is strong throughout, including lyrics. Surrounds and LFE really kick in during the musical numbers, providing a fairly immersive experience.

The special features are aimed at the movie’s core audience (no surprise), and are quick and to the point.

ZOMBIES: Survival Guide to High School (480p; 2:24): Tips on how to survive in high school, hosted by Meg Donnelly and Milo Manheim, and consisting of quick clips from the movie.

Dance Tutorial (480p; 3:38): Join Meg Donnelly (Addison), Kylee Russell (Eliza) and ZOMBIES Choreographer Christopher Scott as they show you how to dance along to the BAMM Music Video.

Z-O-M-B-I-E-S is a forgettable but harmless musical with a message, aimed at kids ages 7 and up, and looks and sounds surprisingly good on DVD. 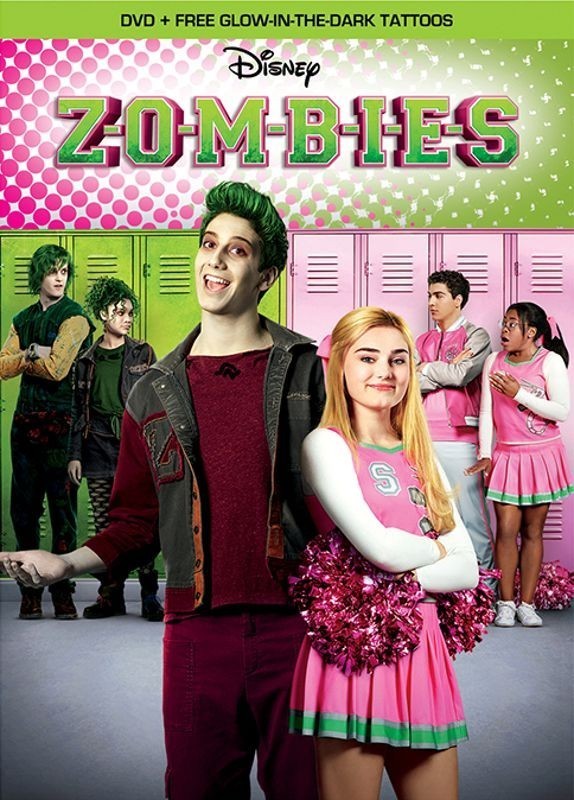