Forum List What's new Dark Style Change width
Log in Register
What's new Search
Menu
Log in
Register
Navigation
Install the app
More options
Dark Style
Close Menu
Posted on April 19, 2016 by Matt Hough
You are using an out of date browser. It may not display this or other websites correctly.
You should upgrade or use an alternative browser.
So-so musical is overly familiar 3 Stars

A kind of smorgasbord selection of tidbits from the vaults of 20th Century Fox, Walter Lang’s You’re My Everything may score points for the talent on display but loses them with the deja vu nature of its songs, dances, relationships, and storylines.

A kind of smorgasbord selection of tidbits from the vaults of 20th Century Fox, Walter Lang’s You’re My Everything may score points for the talent on display but loses them with the deja vu nature of its songs, dances, relationships, and storylines. With a lack of cohesion to its musical score and the thrown together feel of the narrative, it’s a wonder the movie is as entertaining as it is. Credit has to go to two charismatic stars who rise well above their threadbare material.

Moonstruck Boston blue blood Hannah Adams (Anne Baxter) can’t get enough of musical theater performer Tim O’Connor (Dan Dailey), but she suspects he won’t find favor with her upper crust family. But meddling Aunt Jane (Anne Revere) who lost her own chance at happiness many years prior fearing her choice wouldn’t meet the standards of the family pushes the two lovebirds into marriage. Tim has an offer to audition for silent movies in Hollywood at Superior Studios, but it’s Hannah whom the studio executives swoon over, and she signs a lucrative contract and becomes the “Hatcha Girl” topping box-office charts for three years. But when the talkies come in, Hannah willingly bows out knowing she’s no actress and with no real interest in the profession now that she’s going to have a baby. Tim with his song and dance talents jumps in on the wave of musical films in the early years of talkies and becomes the star of the family. The musical fad doesn’t last, of course, but Tim is okay calling it a day and becoming a farmer even though show business is never very far from his thoughts, an enthusiasm he passes along to daughter Jane (Shari Robinson) even though Hannah wants no show business to interfere with her daughter’s upbringing.

Lamar Trotti and Will H. Hays Jr. have adapted a story by Mr. Show Biz himself George Jessel in writing the overly familiar script which doesn’t miss a cliched trick in its narrative of the transition from silent films to talkies to the rise of child stars in the mid-to-late 1930s. And for the ramshackle score for this musical, Fox has raided its vaults (and MGM’s) to get more use out of “The Varsity Drag” (the hit number in Tim’s stage show which isn’t Good News for some reason but instead something called The Girl from Vassar), “I May Be Wrong” for Tim’s nightclub act (tap steps courtesy of choreographer Nick Castle), “Chattanooga Choo Choo” as Tim’s big talkie debut song and dance, and “On the Good Ship Lollipop” for the climactic screen dance with his daughter (with Dailey in blackface, perhaps the last time that old minstrel tradition was used in a mainstream film). They even get lyricist Mack Gordon to cameo in the studio head’s office to sing a chorus of “I Can’t Begin to Tell You,” this and all of the other numbers anachronistically out of their proper time placement in the history of stage and screen musicals. Veteran Walter Lang handles all of it with smoothness and surety, but there’s not much he can do with the husband and wife squabbles which would take five minutes of serious discussion to settle instead of the expected separation and threats of divorce that the screenplay navigates poorly. He does stage and shoot a couple of fun silent movie excerpts showing Hannah as the screen’s “Hatcha (read ‘It’) Girl.”

After years of performing with Betty Grable in Fox musicals, Dan Dailey gets top billing though his role is merely a variation of all the ones he played at Fox with Grable and others. He’s certainly as secure with the song and dance as always even without a leading lady to perform with (a brief foray on stage for Hannah proves she was never meant to be a chorus girl). Anne Baxter’s role is rather scattershot: she’s quite an airhead in the early going maturing in grace and poise as she learns to deal with her screen stardom, but her later aversion to show business seems to go against her and her husband’s own experiences and doesn’t make a lot of sense, especially since we’re never given a scene where she sits down with her daughter and they discuss the pros and cons of a show business career. Anne Revere gets to be the know-what’s-best-for-all character (the role usually played by someone like Ethel Barrymore), and she’s as professional as ever. Shari Robinson as the stars’ talented daughter Jane is cute as can be but doesn’t throw off any major charismatic sparks. Old reliables Henry O’Neill, Selena Royle, Alan Mowbray, and Stanley Ridges provide dependable support, and even Buster Keaton pops up in a funny cameo moment.

The film’ original theatrical 1.37:1 screen aspect ratio is faithfully delivered in this made-on-demand transfer. Sharpness is very good, and color is better than one might expect knowing Fox is working with Eastmancolor elements instead of the original Technicolor materials. In darker scenes, skin tones get a bit hot and a trifle orange, but otherwise color is solid and reasonably appealing. Black levels are fine, and contrast has been consistently applied for the best possible picture. There is occasional dust and colored debris, and the reel change markers are still front and center. The film has been divided into chapters every ten minutes so this film has 10 chapters.

The Dolby Digital 2.0 sound mix is decoded by Dolby Prologic into the center channel. Age-related problems with hiss and crackle, among others, are really not a problem, and the dialogue and song lyrics are well recorded and easily discernible. The music and the atmospheric effects both share the mono track well with the dialogue and never overpower one another for prominence.

You’re My Everything isn’t an outstanding Fox musical of the period, and too much about it seems borrowed and overly familiar, but the stars do their jobs with aplomb, and the Fox Cinema Archive release is overall a pleasure to watch.

Truthfully though, this sounds right up my alley. Wish-listed!

I've never seen this film but I like Dan Dailey a lot and I never mind spending an hour or so with Anne Baxter. As the disc seems to be quite good, I think I'll buy it!
You must log in or register to reply here. 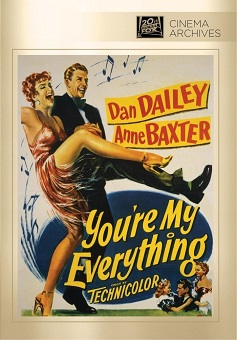