The Young Girls of Rochefort, Jacques Demy’s 1967 song-and-dance follow-up to his pop opera The Umbrellas of Cherbourg, didn’t receive the overwhelming acclaim of its predecessor, but time has been kind to this unique French musical.

The Young Girls of Rochefort, Jacques Demy’s 1967 song-and-dance follow-up to his pop opera The Umbrellas of Cherbourg, didn’t receive the overwhelming acclaim of its predecessor, but time has been kind to this unique French musical, and its joie de vivre can be glimpsed in every frame of the work, a testament to the vision and dedication of its two creators: director-librettist Jacques Demy and composer Michel Legrand.

Looking for love and satisfying careers are twin sisters Delphine (Catherine Deneuve, vocals by Anne Germaine) and Solange (Françoise Dorléac, vocals by Claude Parent) Garnier, the former a dancer eager to ply her trade at the Opera Paris and the latter a composer and musician who is hoping to work for the Paris Philharmonic. But for this last weekend in Rochefort, they’re tying up loose ends: Delphine ending a love affair with the dull gallery owner Guillaume Lancien (Jacques Riberolles, vocals by Jean Stout) and trying to find the anonymous man who has painted an exquisite sketch of her while Solange is meeting with lovesick music shop owner Simon Dame (Michel Piccoli, vocals by Georges Blanes) who wants to introduce her to composer Andy Miller (Gene Kelly, vocals by Donald Burke) who might help foster her career. Meanwhile a traveling fair is setting up in the town square opposite the open air café of Yvonne Garnier (Danielle Darrieux), mother of the Garnier twins, and among her frequent patrons are two motorcycle pitchmen in town for the fair, Etienne (George Chakiris, vocals by Romuald) and Bill (Grover Dale, vocals by Jose Bartel), and by sailor Maxence (Jacques Perrin, vocals by Jacques Revaux) who is only a few days away from the end of his military service.

Jacques Demy’s narrative through line involves a conglomeration of lost and potential loves all around the corner from each other and separated only by fate or happenstance. If so many contrived coincidences don’t prey too heavily on the viewer’s mind, they can provide the framework for the delightful mise-en-scène for the movie (though the sunny tone and temperament of the movie is disrupted by a pointless subplot involving a mysterious slasher loose in Rochefort, hiding in plain sight at Yvonne’s café). While Michel Legrand’s score didn’t throw out any instant standards on this side of the pond, it’s nevertheless chock full of wistful, jaunty, and abrasive melodies that fit the various moods of the story: the twin’s trippy introductory song that stresses their kinship under the sign of Gemini, Delphine’s frustrated breakup with her lover, Simon’s melancholy paean to lost love and newly found infatuation, Andy’s love at first sight reaction to meeting Solange, and the twin’s showstopping song and dance at the fair. While Young Girls hews far more closely to the tenants of the traditional musical with song, dance, and dialogue than the through-sung Umbrellas did, Demy does stumble in introducing us initially to a town whose citizens practically dance on air (several group dance sequences are breathtaking covering the expanse of the wide Franscope screen) and then oddly only uses the motif in fits and starts for the rest of the film. Norman Maen’s choreography is chic and full of graceful gliding whether the performers are real dancers (Kelly, Chakiris, Dale) or not, and Demy has been sure to capture the rapturous élan of the dancers whenever the mood seems right.

Only Danielle Darrieux among the principals does her own singing, and it’s a pleasure to see this veteran actress with a role that suits her age and disposition. But the cast is so large and is so impressive in their roles that there is really no room for complaints. Catherine Deneuve is once again exquisite to look at, and she wears her pastels and primary colored outfits with real flair. Luckily, her real-life sister plays her twin in the movie – Françoise Dorléac whose former dance training does her well in a couple of more intricate numbers, especially the musical rampage of song, dance, and instrumentation that she, Deneuve, George Chakiris, and Grover Dale take part in late in the film. Chakiris and Dale, both experienced dancers, are, of course, in their element in the terpsichorean sequences: both are excellent with Chakiris exhibiting just a bit more flair and pop in his steps and body language. Gene Kelly gets one flight of fancy after he falls instantly in love, and Michel Piccoli gives perhaps the movie’s most poignant performance as Yvonne’s former lover who has no idea his new crush is his former lover’s daughter. Jacques Perrin is all fresh-faced innocence and youthful ebullience as artist Maxence in the one storyline in the film that doesn’t get tied up in a nice and neat little bundle.

The original Franscope aspect ratio of 2.35:1 is faithfully rendered in this 1080p transfer using the AVC codec. Rather than offering an edgy sharpness, the film is rather pleasingly sharp with more than enough detail revealed in clothes, facial features, hair, and settings. Color is vibrant throughout with the pastels and bright primaries registering wonderfully (reds especially pop) and skin tones looking very realistic and most appealing. Contrast has been consistently applied for a sterling picture. No age-related problems with dirt, dust specks, or scratches are evident in the least. The white subtitles are very easy to read. The movie has been divided into 19 chapters.

The DTS-HD Master Audio 5.1 French language sound mix doesn’t take full advantage of all available surround channels. Dialogue and song lyrics are heard clearly in the center channel. The music gets an excellent spread across the front soundstage but only momentarily makes an impression in the rear channels. There are no problems with age-related artifacts like hiss or crackle.

Behind the Screen (34:59, HD): a 1966 French television series delving behind the scenes on the production of a movie. In this episode, we have production designer Bernard Evein discussing his two years of work on the project. We also see actress Catherine Deneuve have a tantrum on set with a costume she feels doesn’t work and producer Mag Bodard explain why the production ended up ranking as one of the most expensive French pictures ever made.

The Young Girls Turn 25 (1:06:52, HD): Demy’s wife Agnes Varda filmed this 1993 documentary celebrating twenty-five years of the film’s notoriety celebrated in Rochefort with special guests Catherine Deneuve, Jacques Perrin, Bernard Evein, Mag Bodard, and several townspeople who served as extras on the film and are still around to relive the memories.

Pamphlet: contains cast and crew list, information about the transfer and 2011 restoration, and an essay on Demy’s career and the film itself by film critic Jonathan Rosenbaum.

A joyous song and dance spectacular in French, The Young Girls of Rochefort is not without its quirks and missteps, but overall it’s a jaunty lark of a movie that will sweep you up with its music and movement if you surrender yourself to it. The Criterion Blu-ray offers a gorgeous high definition rendering of a movie that time has been very kind to. Recommended!

Great review, Matt .... I hope your praise persuades many HTF members to give this lovely movie a spin.
Reactions: Matt Hough

Is this the same transfer as the boxed set? thanks

I don't have the boxed set, but I'm sure it is. This and Umbrellas were simply single releases from that set.

Yes, the same transfer exactly. Matt, did they not send you the box set? You'd think they would have wanted these reviews when that came out.

haineshisway said:
Yes, the same transfer exactly. Matt, did they not send you the box set? You'd think they would have wanted these reviews when that came out.
Click to expand... 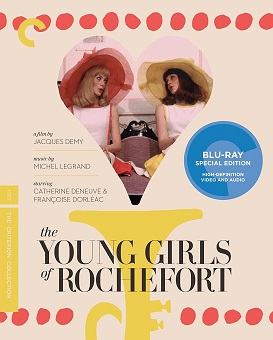