Forum List What's new Dark Style Change width
Log in Register
What's new Search
Menu
Log in
Register
Navigation
Install the app
More options
Dark Style
Close Menu
Posted on July 22, 2018 by Sam Posten
You are using an out of date browser. It may not display this or other websites correctly.
You should upgrade or use an alternative browser.

I went into You Were Never Really There without any hint as to what it is about. I recommend new viewers approach it similarly. If you are prepared… Read on!

Joe (Joaquin Phoenix) is a brutal man-for-hire, and we learn his specialty is tracking down girls caught in sex trafficking. He’s got his own demons, from both childhood and past military service, but outside of ‘work’ he keeps to himself and tends to his mother (Judith Roberts). Joe’s efforts get turned upside down when his fixer gets him to search for a congressman’s (Alex Manette) missing daughter, Nina (Ekaterina Samsonov). After tracking down Nina Joe learns that the congressman appears to have committed suicide, but has really been killed off by a corrupt Governor with a taste for underage girls. The Governor’s henchmen come looking for all involved in Nina’s rescue, and they will do anything it takes to anyone who knows him in order to find Joe. 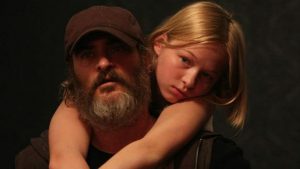 Told with sparing dialogue and heavy but disconnected flashbacks, YWNRH unfolds as we learn more about Joe and what makes him tick.  Early in the film we see him in the midst of a hit, but it is not clear that he’s acting with purpose until later.  We put the pieces together as we learn about his care for his mother, concern that a contact’s child may be put in danger for having seen him, and we see his later assignments.

Anti-heroes have gotten a lot more traction this decade, and despite Joe’s brutality we can’t help but root for him.  His suicidal ideation and traumatic flashbacks keep us guessing as to how effective he can be, but like the relationship formed in Leon we see that the bond he builds with a child might give hope for his peace in the future. 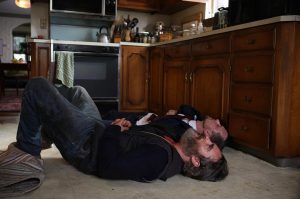 YWNRH looks darn good despite a ton of nighttime action and being presented in 1080p. I never caught any obtrusive grain, halos or other artifacts, tho I do wonder if an HDR pass could bring out a bit more detail.  It’s solid but not remarkable.

The best way for me to describe Johnny Greenwood’s soundtrack to YWNRH is ‘damage’.  Not that the sountrack is off in any way, but it clearly echoes the trauma that Joe carries and the damage he is willing to mete out to those who traffic in children.

And that soundtrack is presented very nicely to all corners throughout the film, wrapping you in it’s embrace through Joe’s story, from his attacks to the horrors he witnesses.  There’s an underwater sequence in which you can feel yourself with Joe in that environment.  Sad and reflective but determined to carry on to help others.  Spot on.
That’s matched by the sound of guns, explosions and Joe’s hammer blows, which are all imaged well.  Dialogue is well captured except for scenes where Joe’s got a bloody mouth and converses with half dead hitmen.  Overall it sounds pretty great.

4 Trailers, no other extras.  LAME.

I definitely recommend going in to YWNRH with little fore-knowledge.  It made peeling back the onion that is Joe that much more satisfying.  I wish this disk had any extras at all to flesh it out.  It clearly calls out for commentary from either original author Jonathan Ames and or screenwriter/director Lynne Ramsay.  For those who want more, like I did, I recommend digging into these interviews:

Personally, I’m planning to get the book on Kindle at some point, I’d like to see how it differs from this adaptation, and what I might learn from Joe’s backstory. 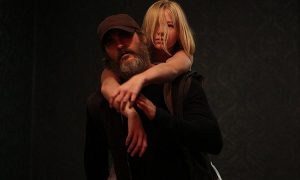 Thanks for the review, Sam. I wanted to go see this in theaters but missed it. A barebones disc isn't really making a compelling case for blind purchase. Since Amazon Studios is the distributor, I know it will end up on Prime, probably sooner than later, so I'll just wait for it to show up there.

That's a fair assessment I guess. I can't argue with that!
You must log in or register to reply here.