The title is good advice 2.5 Stars

Actor Kevin Bacon and writer/director David Koepp team up again for the first time since 1999’s Stir of Echoes in the direct to VOD release You Should Have Left, a movie that is ultimately disappointing considering the talent involved.

Theo (Kevin Bacon) is having nightmares harking back to his being accused of killing his first wife. Relations with his current wife, actress Susanna (Amanda Seyfried), are strained, with Theo grappling with jealous thoughts while his wife is shooting love scenes. The two agree they need a family vacation, especially before the movie Susanna is currently shooting moves production to London. They settle on a house in Wales and with their young daughter Ella (Avery Essex) they take up residence. This is not your typical European countryside home, a much more modern design that Theo and Susanna quickly note as appearing larger inside than out. The nightmares continue, not only for Theo, but for daughter Ella, too. Doors appear and disappear. Someone has been writing “YOU SHOULD LEAVE” in Theo’s journal, and instead of taking the advice Theo wants to know who has been writing those words. Theo soon finds out that no matter what he does, he cannot leave this house, stuck in an endless loop. Is he going mad, or is the house really haunted?

Writer/Director David Koepp has been following the same type of career path of John Sayles – writing major blockbusters for top-list directors like Brian DePalma (Mission: Impossible, Snake Eyes), Robert Zemeckis (Death Becomes Her), Steven Spielberg (Jurassic Park, War of the Worlds), Sam Raimi (Spider-Man), and Ron Howard (The Paper, Inferno) and then writing and directing much smaller films like The Trigger Effect, Stir of Echoes, Secret Window, Ghost Town, and Premium Rush. Koepp’s shot at directing a blockbuster came with Mortdecai, the only film he did not write, with disastrous results. You Should Have Left is not only a return to making smaller films (the reported budget was around $4 million) but reteaming with the star of one of Koepp’s most successful films, Stir of Echoes, Kevin Bacon. Despite the film’s short 93 minute running time, You Should Have Left moves along sluggishly, feeling like at least twice that length. Amanda Seyfried has very little to do here, her character is more of a plot device and window dressing than anything else. Avery Essex is wonderful as the daughter Ella, the best thing in the movie. Bacon is good in this role, but there really isn’t much to work with, as Koepp goes more for jump scares than giving us a more focused backstory and playing up the more psychological thriller angle. Even worse, the movie’s big reveal during the third act is actually given away rather lazily in the first five minutes of the movie.

You Should Have Left was captured at 2.8K resolution on Arri Alexa Mini cameras and completed as a 2K digital intermediate. Universal has released the film in HD on digital platforms (it is also available on standard definition DVD). I viewed the film in its entirety on an Apple TV 4K via the Apple TV app, then sampled on Vudu, Movies Anywhere, Fandango Now, Prime Video, and Google Play Movies apps on my Roku Premiere. The image quality overall is excellent, with natural and well-saturated colors. Detail is very good, revealing fabric textures and beard stubble. Contrast was also very good, with deep blacks that retain excellent shadow detail. There also was no noticeable banding or other compression artifacts. This was true across all tested platforms, although Google Play Movies had an issue with maintaining a constant resolution.

Nearly all of the platforms offer the film with a Dolby Digital Plus 5.1 soundtrack. (the exceptions being Google Play Movies and the Apple TV app on Roku). This is a rather by-the-numbers horror mix, shocking the viewer with loud noises, and the mix does this quite effectively and discretely. LFE is used rather sparingly, though. Dialogue is clear and understandable throughout.

Universal has included NO special features of any kind on any digital platform for this release.

The title You Should Have Left is ripe for jokes, especially considering how disappointing the movie is. 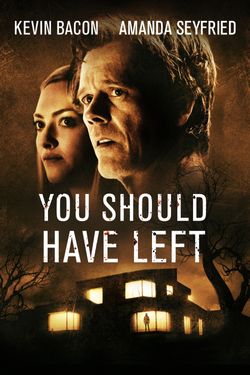