Posted on September 19, 2019 by Todd Erwin
I believe in Yesterday. 4 Stars

Jack Malik (Himesh Patel) is a real Nowhere Man, a singer-songwriter whose career is in a downward spiral. He plays at nearly empty coffee houses populated only by his friends, sings alone on an empty boardwalk, and even performs to an empty tent at one of London’s top musical festivals that his manager and longtime friend Ellie (Lily James) was able to book him at. That all changes one night when Jack is hit by a bus during a planet-wide momentary blackout, putting him in the hospital. When he recovers, his friends throw him a party, gifting him with a new guitar to replace the one damaged in the accident. Jack picks up the instrument and christens it by playing The Beatles’ Yesterday. His friends and Ellie are touched by the song, except they’ve never heard it before. Apparently, during the blackout, an alternate timeline occurred where the four lads from Liverpool never existed (or, more accurately, as we learn later on, never met or achieved fame as musicians). Jack rushes home, searching on Google and then through his record collection, unable to find any trace of The Fab Four. He begins playing their songs at his usual venues, and finds that the crowds are beginning to warm up to him. This prompts Ellie to book some recording time for Jack to lay down some tracks in a studio and cut a CD. The CDs become popular (possibly because Jack starts handing them out to customers for free at his day job at a Costco-like warehouse store), leading to an appearance on a local television program. This catches the ear of Ed Sheeran (playing himself), who invites Jack to join him on tour as his opening act in Moscow. Jack’s performance of Back in the USSR sends the crowds cheering on their feet and a video of the concert going viral. Enter record executive Debra Hammer (Kate McKinnon), who invites him to Los Angeles to record some more songs and release “the greatest double album of all-time.” Jack is desperately trying to remember all of the lyrics and melodies of The Beatles rather than try to write songs of his own, and before he realizes it, fame has gone to his head, leaving Ellie behind in England, who has since moved on and is now dating the owner of the small recording studio.

Director Danny Boyle and screenwriter Richard Curtis have made an enjoyable and certainly entertaining romantic comedy musical fantasy, but one that never really explores a world where the influences of The Beatles and their songs never existed, or the true consequences of plagiarism. Jack never really has a guilty conscience of passing these songs off as his own, and there are many musical performers who likely would have never gone into music if it were not for The Beatles (and I suspect Ed Sheeran may be one of those). This is still a very sweet movie, with the platonically stalled relationship between Jack and Ellie being the central point of the film. Patel and James are certainly a cute couple, and that helps propel that part of the plot. Kate McKinnon’s dripping sarcasm of a performance as the shark-like executive plays like a personal statement of the entertainment industry.  Yesterday is a sweet film, but one that could have, and should have, been much deeper.

Yesterday was captured at 8k resolution using RED Weapon 8k cameras and completed as a 4k digital intermediate. Universal’s Blu-ray release looks terrific (the movie has also been released on UHD Blu-ray), featuring an AVC-encoded 1080p transfer that retains the film’s 2.39:1 aspect ratio. Fine detail is exceptional, from Himesh Patel and Ed Sheeran’s beard stubble and Lily James’ facial features to various fabric textures. Colors are natural and vibrant without ever blooming. Black levels are very good, providing good shadow detail with no obvious crush. There were no compression artifacts to be seen either.

The Dolby Atmos track is phenomenal, wide and expansive when necessary. Concert sequences come alive, immersing you in a “you are there” feeling, with crowd noise and hall acoustics emanating from the surrounds and heights. LFE is very good, giving the music tracks a nice low end. Dialogue is clear and understandable throughout.

Audio Commentary with Director Danny Boyle and Writer/Producer Richard Curtis: The two men have a great time together discussing various aspects of the production.

Alternate Ending (1080p; 3:10): While not quite the alternate ending I was expecting, it was still an interesting one.

Live at Abbey Road Studios (1080p; 9:50): Live music videos of Himesh Patel (with a backup band on some) performing Yesterday, I Want to Hold Your Hand and Let It Be.

Alternate Opening (1080p; 4:47): The originally planned opening that Boyle and Curtis admit in the audio commentary wasn’t working or testing well, although some of it was re-used as a flashback.

Playing for Real (1080p; 5:35): A look at casting Himesh Patel in the lead and having him perform the songs live.

Ed Sheeran: From Stadium to Screen (1080p; 3:09): Ed Sheeran, along with cast and crew members, discuss his performance and the parallels to his career.

A Conversation with Richard & Ed (1080p; 3:22): The two men discuss growing up and shooting in Suffolk, and how Ed Sheeran fell into the film when Chris Martin of Coldplay was not available.

Yesterday is a sweet and enjoyable film, but could have gone much deeper with its premise. Presentation is excellent and fans of the film will appreciate the amount of Special Features that have been included. 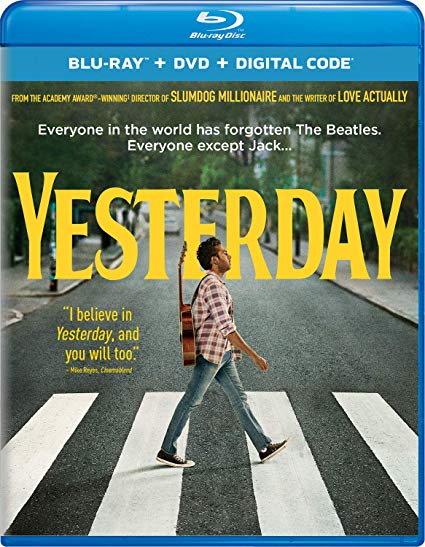