Forum List What's new Dark Style Change width
Log in Register
What's new Search
Menu
Log in
Register
Navigation
Install the app
More options
Dark Style
Close Menu
Posted on June 1, 2017 by Matt Hough
You are using an out of date browser. It may not display this or other websites correctly.
You should upgrade or use an alternative browser.
Feather-light romantic adventure is a pleasant diversion. 3 Stars

A romantic caper film that’s lighter on the caper and the romance than it should have been, Peter Yates’ Year of the Comet offers charming parts for its two young leads but trips heavily when its footing should be feather light as the battle for a bottle of wine winds itself from the Scottish highlands to the French Riviera.

A romantic caper film that’s lighter on the caper and the romance than it should have been, Peter Yates’ Year of the Comet offers charming parts for its two young leads but trips heavily when its footing should be feather light as the battle for a bottle of wine winds itself from the Scottish highlands to the French Riviera. Oscar-winning screenwriter William Goldman seems a bit bereft of ideas to keep his soufflé lighter than air, but some winning performances and the gorgeous locations (plus a relatively brief running time) make it a tolerable enterprise.

Overjoyed when her wine connoisseur father Sir Mason Harwood (Ian Richardson) finally gives her an assignment to catalog the contents of the wine cellar in McPherson Castle in Scotland, Margaret Harwood (Penelope Ann Miller) is astonished to find a huge bottle with Napoleon’s crest dated 1811, the year of the comet and possibly one of the most valuable bottles of wine in existence. Millionaire T.T. Kelleher (Shane Rimmer), interested in acquiring the wine for one million dollars, sends his assistant Oliver Plexico (Tim Daly), whose taste for vintages goes no farther than the beer cooler in the local 7-11, to bring the bottle safely back to him. While Margaret and Oliver clash instantly, they’re bound by a common goal of getting the bottle back unharmed to its new owner and thwarting two sets of thugs who stand in their way: a scientist (Louis Jourdan) and his confederates searching for a certain chemical formula which has been scrawled on the box containing the wine and Nico (Art Malik) and his cohorts who are trying to retrieve the wine for their boss who had been sold the wine by Margaret’s scheming brother Richard (Timothy Bentinck) who’s determined to get the credit for the million dollar sale the wine is certain to fetch for their father.

While the movie contains a fair share of wit, romance, and charm, what doesn’t help is William Goldman’s underwritten screenplay. The Oscar-winning writer doesn’t develop the comic situations with any depth (the characterizations are truly paper thin) while the suspense isn’t ratcheted up to nearly the extent that would help give the film the same kind of bracing mix of moods that distinguished Charade or Gambit, for example, or its most direct predecessor Romancing the Stone. Director Peter Yates who pulled off the caper comedy The Hot Rock almost two decades prior to Year of the Comet utilizes the desolate, foggy Scottish moors, hills, and lakes to set up possible suspense, danger, and mystery, but once the chase is on for the stolen wine bottle, the suspense rather fades away for goodly amounts of time as we’re whisked away to the sunny shores and luxurious spaces of the French Riviera (our plucky duo travels to these exotic locales via vintage automobiles, helicopters, and a prop plane, all acquired with minimal fuss). The glorious widescreen cinematography captures both the gloom and the glory of the locations admirably with some especially gorgeous Scottish landscapes on display, and Yates directs a charming and momentarily anxiety-ridden sequence as Oliver scales a mountain chateau in cowboy boots and inevitably dangles from bedsheets high above when his parapet breaks out from under him. But the film could have used many more such sequences where mirth is mixed effervescently with trepidation.

Penelope Ann Miller is thoroughly winning as the feisty, determined young wine expert out to prove her mettle to her disapproving half-brother and apprehensive father. Not a conventional beauty and at least at first less interested in falling into bed with her attractive cohort than proving herself a professional with a job to do, Miller’s Margaret could have been a leading lady for the ages had writer Goldman not opted to make her the easy, dewy-eyed romantic who beds the leading man and then thinks better of it in the morning. Tim Daly certainly has the rascally sparks of a Gable or Grant as part of his screen persona, but the uneven writing has him alternately crass and charming, weak of back and powerfully macho by turns. Louis Jourdan plays a spiteful villain again as he had done previously in Octopussy, and he’s as ineffectual here as he was in that Bond film, never quite generating the necessary menace to make the character completely work and having to partake in an embarrassing denouement of his own. Ian Richardson offers a fine performance as the stuffy, calculating father, and Timothy Bentinck is unbearably smug as Margaret’s less knowledgeable half-brother.

The film’s original theatrical 2.35:1 aspect ratio is faithfully delivered in this 1080p transfer using the AVC codec. It boasts acceptably sharp image quality (apart from scenes on Loch Ness shrouded in heavy fog) and warm, inviting colors with very appealing skin tones. Black levels are up to the task, too. But there are some dust speckles here and there throughout the running time that occasionally draw attention to themselves. The movie has been divided into 24 chapters.

The DTS-HD Master Audio 2.0 stereo sound mix is highly reminiscent of the theatrical experience with the dialogue wonderfully recorded and always easily discernible, never overpowered by Hummie Mann’s nicely stereophonic background score or the atmospheric effects which likewise get the stereo treatment. No age-related problems with hiss or crackle impede the listening experience.

Six-Page Booklet: contains some color stills, original poster art on the back cover, and film historian Julie Kirgo’s chipper essay on the film.

Year of the Comet doesn’t quite fulfill the expectations from a first-class director like Peter Yates or a first-class screenwriter like William Goldman, but it’s a reasonably engaging romantic adventure with very attractive leading players and an easy-to-take caper scenario which makes for a decent way to spend ninety minutes. There are only 3,000 copies of this Blu-ray available. Those interested in purchasing it should go to either www.twilighttimemovies.com or www.screenarchives.com to see if product is still in stock. Information about the movie can also be found via Facebook at www.facebook.com/twilighttimemovies.

The film was in Dolby Stereo theatrically. Do you know if the Blu-ray's 2.0 track contains any matrixed surround information?
You must log in or register to reply here. 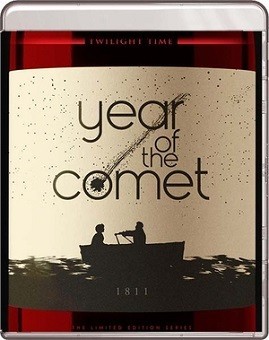