xXx: Return of Xander Cage was captured at 3.4K resolution on Arri Alexa Mini and XT cameras, then completed as a 2K digital intermediate. That DI has been upscaled to 2160p with some additional color grading using HDR10, then compressed in HEVC at bitrates that fluctuate between 24 and 104 Mbps. This is a very solid presentation, slightly better than the 1080p Blu-ray. Fine detail is improved subtly, from more defined beard stubble to now more obvious green screen work. Overall, colors are more natural and have a warmer tone to them on UHD. Contrast is also stronger, with deeper blacks and increased shadow detail.

The UHD contains the same Dolby Atmos track found on the Blu-ray, and this is a very immersive and active track, even when played back on a 5.1 setup with additional front heights and Pro-Logic IIz engaged. The rocking score by Brian Tyler and Robert Lydecker pulses with the wider and more dynamic soundstage, and sound effects permeate every speaker with pinpoint precision effortlessly. Dialogue is clear and understandable throughout, never getting overpowered in the mix by music and effects. This is a very demo-worthy track.

All of the Special Features can be found in the included Blu-ray edition of the film.

Third Time’s the Charm: Xander Returns (1080p; 8:13): A brief look at resurrecting the series after a 12-year hiatus, and bringing back Vin Diesel.

Opening Pandora’s Box: On Location (1080p; 16:10): A look at how the film tried to stretch its budget with physical sets rather than relying on CG-created locations. 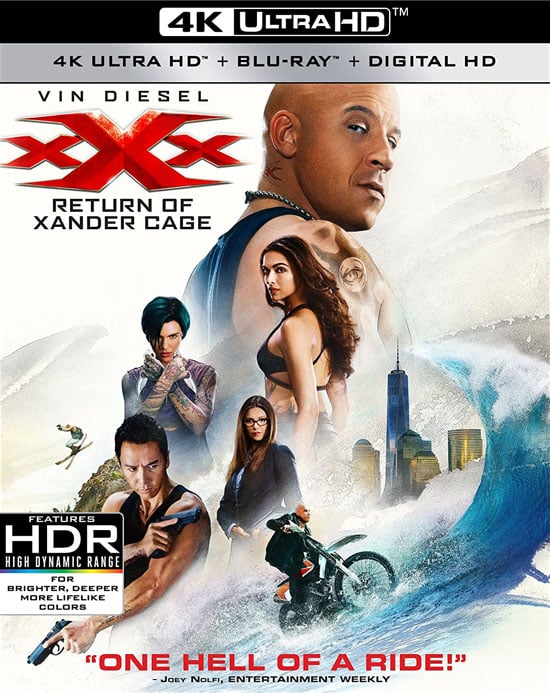