Emily Bronte’s Gothic romance returns to the screen in Robert Fuest’s 1970 version of Wuthering Heights, an expensive color production that sadly lacks the atmosphere and intimately chilling, dysfunctional interpersonal relationships that characterize the novel and the celebrated 1939 adaptation of the book.

Emily Bronte’s Gothic romance returns to the screen in Robert Fuest’s 1970 version of Wuthering Heights, an expensive color production that sadly lacks the atmosphere and intimately chilling, dysfunctional interpersonal relationships that characterize the novel and the celebrated 1939 adaptation of the book. Fine actors don’t seem able to breathe much life into this haunting story, and a rather banal ambiance seems to hang over most of the movie.

The wealthy Mr. Earnshaw (Harry Andrews) returns to his home “Wuthering Heights” with Heathcliff (Timothy Dalton as an adult), a young street urchin he rescues on a trip to Liverpool, welcoming the boy into his stately rural mansion despite the resentment of Earnshaw’s wife (Rosalie Crutchley) and their son Hindley (Julian Glover as an adult). Though Earnshaw’s daughter Catherine (Anna Calder-Marshall) initially treats Heathcliff with disgust, the two eventually fall into a tormented love-hate relationship. When Catherine’s hateful brother Hindley returns home in the wake of his father’s sudden death, it threatens to tear the young lovers apart, and they suffer further agonies when Catherine impulsively marries neighbor Edgar Linton (Ian Ogilvy) even though she had promised Heathcliff everlasting fidelity. Heathcliff determines to raise his status in order to dish out vengeance on all who have mistreated him through the years, and when he returns from London with money in his pocket and some gentlemanly airs hitherto thought impossible, he sets about to carry out his revenge.

Patrick Tilley’s screenplay brings forth much of the narrative to be found in the first part of the Emily Bronte novel (even down to having narration provided by the maid Nellie played by Judy Cornwell, though the narration becomes rather a forgotten entity before the film is half over; it also mirrors the 1939 version’s omission of the novel’s second half). But what’s missing here is the brooding atmosphere of the moors with the haunted and haunting moods that give the story its unforgettable power. (Filming in color is also something of a hindrance here as things look too pretty quashing any ambiance that might have been attempted. The black and white 1939 Wyler version beats this six ways from Sunday in terms of atmosphere.) Originally planned as a three-hour epic, the film’s truncated running time plays havoc with character continuity and the film’s pacing. Director Robert Fuest tends to shoot action scenes in too tight close-ups that render the surrounding activity ineffectual though there is a stupendous shot of Cathy sinking to the floor in a delirium that is shot from above and makes Cathy seem to be falling into an enveloping abyss. The movie’s G rating assures the viewer that beatings and other physical abuse are going to happen mostly out of camera range, and any vile language that might have been spoken also gets laundered.

Anna Calder-Marshall captures much of Cathy’s emotional imbalance, but her wildness and spiritedness seems artificial. Timothy Dalton manages to produce both Heathcliff’s feral nature in the early scenes and his calculated gentlemanly airs later on, but the ultimate tragedy of his losing the love of his life and the intense electricity of the passion that Cathy and Heathcliff are supposed to share are only sporadically present. Cutting or insufficiently developed characters on the script page seems to have cut into the effectiveness of the performances of Ian Ogilvy as the weak Edgar Linton, Hilary Dwyer as the embittered Isabella Linton, and Julian Glover as the dissolute Hindley Earnshaw. Judy Cornwell is very good as the concerned Nellie, and Harry Andrews and Rosalie Crutchley provide their usual splendid performances as the senior Earnshaws. Oscar-winner Hugh Griffith has a good scene or two as the concerned Dr. Kenneth and Aubrey Woods as the pious servant Joseph likewise provides stalwart support.

The film’s 1.85:1 original theatrical aspect ratio is faithfully rendered in this 1080p transfer using the AVC codec. Sharpness is excellent with plenty of detail to be seen especially in facial features and with the director’s fondness for close-ups. Color saturation levels are also strong with realistic skin tones and hues that are solid without unnecessary excess. Black levels are very good as well. While there are some stray dust specks here and there, this is one of the cleaner MGM Blu-ray transfers. The movie has been divided into 24 chapters.

The DTS-HD Master Audio 2.0 mono sound mix offers an excellent reproduction of the era-typical monaural soundtrack. Dialogue has been well recorded, and it has been mixed carefully and expertly with the Michel Legrand background score and the atmospheric sounds of the Georgian period.

Audio Commentary: film historian Justin Humphreys offers a reasonably persuasive argument for the film’s underrated quality but spends much of the track time filling the listener in on scenes that were cut causing the resulting continuity to seem jumpy.

Six-Page Booklet: contains color stills from the film, original poster art on the back cover, and film historian Julie Kirgo’s interesting background information on the novel and its subsequent adaptations on film and on television.

The 1970 version of Wuthering Heights doesn’t quite capture the wildness and haunting sadness of the original novel or the earlier classic 1939 adaptation, but for newcomers to the story, it offers a reasonably good introduction to this melancholy tale of a quartet of unhappy lovers. There are only 3,000 copies of this Blu-ray available. Those interested in purchasing it should go to either www.twilighttimemovies.com or www.screenarchives.com to see if product is still in stock. Information about the movie can also be found via Facebook at www.facebook.com/twilighttimemovies.

If you shut your eyes and listen to the isolated music track, you will likely find yourself utterly transported; it's an absolutely gorgeous score from Michel Legrand (SUMMER OF '42, THE THREE MUSKETEERS (1974), ICE STATION ZEBRA), arguably his best, full of lush orchestrations -- the string arrangements are incomparable -- and brooding, beautiful melancholy. It is one of my favorite of my two thousand or so film scores, and one I go to sleep by regularly.

Eyes open, the film onscreen is, as has been pointed out in Matt's excellent and detail review, cannot match the atmosphere of the 1939 version, but it's no loser, either. This was an interesting choice of titles for American-International to produce during that period, seeing as how their contemporaneous releases were generally horror, biker and teen fare. Probably this was earmarked to be a special, prestigious holiday release to give AIP a bit more austerity. I'd have preferred that it had been photographed in black and white, but a lot of the color work here is quite atmospheric. I am not a fan of Calder-Marshall's performance and not especially taken with Dalton's, although neither is an embarrassment.

I have looked forward to a Blu-ray release of this for years, and am happy TT stepped up to the plate.
Reactions: benbess, Bryan^H and Twilight Time
C

a CD was released recently of the score and like the movie it is good..

Great review Matt.
I liked it bit more than you, but to be fair this is the only film adaptation of it I have seen.

It has been years since I read the novel, but I think this film captures the tone of it very well.
The audio, and video quality I agree are fantastic (what a lovely musical score) and I really had a good time watching this recently.
Reactions: benbess and Matt Hough
You must log in or register to reply here.
Share:
Facebook Twitter Reddit Pinterest Tumblr WhatsApp Email Link 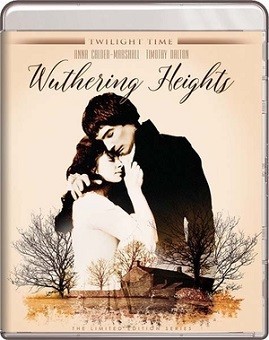