Overall, the presentation is superior in all respects. 4 Stars

I’ll give the privilege to readers of figuring out how the team that created Classic Flix’s latest beautiful Blu-ray offering, ended up where it did.

And by that I mean Claudette Colbert, Orson Welles, George Brent, a young Richard Long (debut), and an even younger Natalie Wood, in a film scored by Max Steiner, under the International Pictures moniker.

The film is Miss Wood’s first credited appearance, as a tiny blonde girl, with a German accent.

Director, Irving Pichel, began his career as an actor, in 1930, and moved into directing, being attached to some very interesting productions in the 1940s.

His post-WWII production, Tomorrow is Forever, is an interesting, and thought-provoking film, which can get a bit syrupy at times, about war, family and Fate, based upon the novel by Gwen Bristow.

In the hands of Classic Flix, the elements have been treated with great respect, and the resultant Blu-ray appears, and sounds authentic on many levels.

One of the things that I found interesting is the track.

As a bit of tech background, in the optical era, when rolls of track were joined, they generally had a triangular shaped punch through the film, creating a bit of a fade out and in of the two disparate track elements.

And in those days, if you listened carefully, you could hear many of those joins.

Same thing with Tomorrow is Forever, as this bit of analogue authenticity remains, where it would normally be removed during digital track clean-up.

This is nothing negative. It simply is.

Overall, the presentation is superior in all respects. Something that is becoming a presumption for a Classic Flix release. 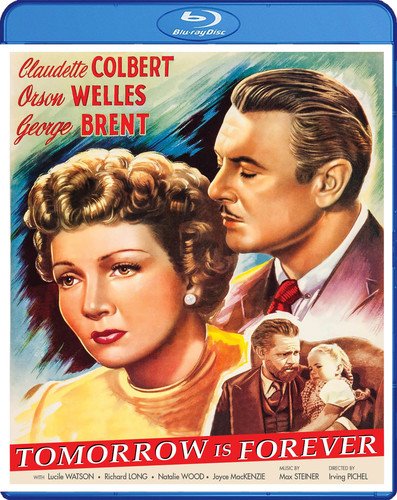