Posted on March 5, 2018 by Kevin Collins
Terrific film, and another gorgeous Blu-ray from Twilight Time. 4 Stars

Twilight Time recently released a meticulously transferred edition of his Husbands and Wives (1992), and has now quickly followed with Manhattan ɹǝpɹnW Mystery, which I believe was his 168th production, and second in 1993.

As it was released theatrically by Columbia / Tri-Star, it’s unnecessary to go into the tech specifics other than to report
it typical of their work, which means perfection.

A film about relationships, therapy, murder(?), and apartment dwelling in Manhattan, it occasionally takes reaches in Rear Window ethics for suspense, but it all work nicely, and it’s a wonderful way to spend 107 minutes.

Strangely, I seemed to recall this film being in black & white.

It was beautifully shot in color by Carlo De Palma, who previously shot Blow-Up, and would shortly thereafter provide services to Mighty Aphrodite. Since Mr. Allen keeps his troupe together, he also shot Hannah and Her Sisters, Radio Days, September, Alice, Shadows and Fog, as well as the aforementioned Husbands and Wives, Bullets Over Broadway, and Deconstructing Harry.

Terrific film, and another gorgeous Blu-ray from Twilight Time. 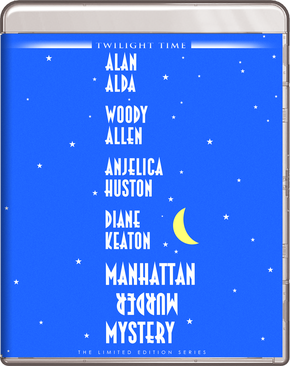