Posted on December 3, 2017 by Robert Harris
In the end, Gidget is a sweet trifle 4 Stars

“If you ever need a friend you can depend on…”

Had Gidget not turned Sandra Dee into a Hollywood sensation, it probably would have been Imitation of Life, or A Summer Place, or one of the Tammy films.

But way back in 1959, Sandra Dee was the teen that every mother wanted their son to bring home.

That fact the she was the correct age for the character she played, which was the sweet innocent, while her friends, high school girls all, sexually harassed every young teen boy on the beach, even though the actors were all in their 20s… or older.

Gidget, almost sixty years later, seems a bit less shocking. When it was released, way back in April of 1959, it stood as a reminder to get rid of that winter fat, and find a new bathing suit, as spring was at hand.

In the end, Gidget is a sweet trifle.

Fortunately, the Blu-ray, courtesy of Twilight Time, was prepped by Team Columbia, which means that the presentation will be as superb as it was in 1959.

This is important, as it was shot by Burnett Guffey, and if the name doesn’t ring a bell, think Bonnie and Clyde, The Reckless Moment, From Here to Eternity and Birdman of Alcatraz.

The film was directed by Paul Wendkos, who was apparently there.

Upgrade from the DVD – Yes 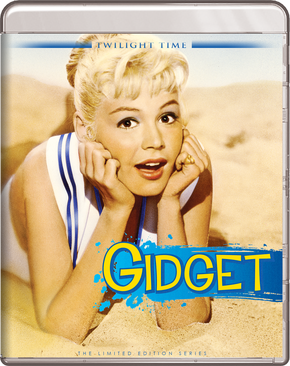