Forum List What's new Dark Style Change width
Log in Register
What's new Search
Menu
Log in
Register
Navigation
Install the app
More options
Dark Style
Close Menu
Posted on September 14, 2017 by Todd Erwin
You are using an out of date browser. It may not display this or other websites correctly.
You should upgrade or use an alternative browser.
A DCEU movie worth watching 4.5 Stars

Before Wonder Woman, I was completely underwhelmed by the DCEU movies that preceded it. None of them matched the levels of fun, thrills, or entertainment that Richard Donner’s 1978 Superman: The Movie provided, or any of the Marvel Cinematic Universe films, for that matter. Both Man of Steel and Batman v. Superman: Dawn of Justice were overly long and dull, and Suicide Squad was a complete mess. However, the trailers for Wonder Woman showed some promise of an exciting and fun origin story. Warner had a lot riding on this film, and if it was not a home run (or at least a triple), it would have meant a closer examination of the DCEU. When the film arrived in theaters early last summer, the movie broke box office records and made stars out of Gal Gadot in the title role and director Patty Jenkins (who just signed on to direct the inevitable sequel).

On a remote and uncharted island, a race of Amazonian women train fiercely in an attempt to ready themselves for battle against Ares, the god of war, who may return at any time to rid the planet of all humans. Diana, the daughter of Queen Hippolyta (Connie Nielsen), has been forbidden to learn the ways of combat by her mother, but her aunt, General Antiope (Robin Wright), has taken her under her wing and has been secretly training her. When Hippolyta discovers Diana’s secret training, she instructs Antiope to train her harder than any other soldier. As Diana grows older (now played by Gal Gadot), she begins to suspect that she may have powers the others do not have, and learns of a secret weapon Zeus left on the island to destroy Ares, known as the god killer. The Amazons soon learn of World War I when Steve Trevor (Chris Pine) crash lands his plane on the island, only to be chased by Germans who are after the book of formulas Steve stole from the evil Dr. Maru (Elena Anaya) that could be a turning point in the war for the Germans, who are on the brink of surrendering. Believing that Ares is behind this, Diana and Steve escape on a boat and sail to England to deliver the book and put together a team to track down and takeout Dr. Maru and General Ludendorff (Danny Huston), who are readying one last attack on London to convince the Kaiser to not sign the Armistice.

Director Patty Jenkins tells Wonder Woman as essentially one long flashback as a tie-in to the super heroine’s cameo in Batman v. Superman, and gives this origin story the right pacing, humor, and action set pieces to keep the audience engaged. Gal Gadot, a relative newcomer, is Diana/Wonder Woman (although the super hero name is never mentioned during the entire film), displaying a strong yet often innocent young woman, totally unaware of the world she has entered but determined to defeat evil at any turn. Chris Pine is also well cast as Steve Trevor, providing the audience someone they can relate to in dealing with Diana, and the two have some chemistry together to make their relationship believable. Rounding out their team are Said Taghmaoui as Sameer, Ewen Bremmer as sharp shooter Charlie, and Eugene Brave Rock as tracker The Chief. Lucy Davis provides nice comic relief as Etta, Steve’s secretary and liaison back in London. Elena Anaya and Danny Huston also own their roles as the visible villains of the piece, exuding creepiness in almost every scene. Finally, David Thewlis is fine as the low-key Sir Patrick, a role that provided some controversy (spoiler) when the film was released.

Shot on 35mm film and completed as a 2K digital intermediate, Warner’s 2160p upscale is a sight to behold. There is a slight increase in fine detail, particularly in the fabrics of the costumes and age lines on the actors’ faces, but the increase in available color gamut is where the disc truly shines. The lush greenery on Themyscira is much more natural with its almost infinite gradients of green, for example. Contrast is also improved with the help of HDR10, providing deeper blacks and stronger shadow detail. Another fine looking disc from Warner.

Warner has outfitted Wonder Woman with a reference-level Dolby Atmos track that still delivers a terrific sonic experience when played back in a traditional 7.1 configuration (I’ll update my review as soon as my private screening room is completed with 5.1.2 Atmos). LFE is strong but never booming, occasionally shaking the floorboards during the many action sequences. Surrounds are also quite active, providing discrete placements of sounds throughout the film. The score by Rupert Gregson-Williams fills the complete soundstage, even placing instruments in discrete locations in the room. Dialogue is directed mostly to the center channel, with some occasional panning where necessary, yet never gets lost in the mix.

All of the Special Features can be found on the included Blu-ray disc. The disc starts with trailers for Justice League, and the WB Movies All Access app.

Epilogue: Etta’s Mission (1080p; 2:41): A scene that probably should have been included in the end credits, as it sets up Justice League.

A Director’s Vision – A Photograph Through Time (1080p; 5:07): Jenkins discusses the creation of the photo that ties Wonder Woman to Batman v. Superman.

The Trinity (1080p; 16:05): A look at the legend of Wonder Woman and her relationship to Batman and Superman.

The Wonder Behind the Camera (1080p; 15:34): A look behind the scenes at the female members of the production crew.

Finding the Wonder Woman Within (1080p; 23:08): Poets and public figures discuss the impact of Wonder Woman.

Wonder Woman defied the odds and expectations to become last summer’s top box office draw, and does the same on 4K UHD Blu-ray with a stunning transfer, demo-worthy soundtrack, and an interesting collection of extras.

Question: I'm trying to use the digital download, but I can't figure out how to get it to show up in iTunes. What am I doing wrong?

Bryan Ri said:
Question: I'm trying to use the digital download, but I can't figure out how to get it to show up in iTunes. What am I doing wrong?
Click to expand...

You're not doing anything wrong. Warner download codes are Ultraviolet only.

Absurd. Thanks for the heads up

Bryan Ri said:
Absurd. Thanks for the heads up
Click to expand...

Movie Anywhere has eliminated some of that problem with some studios. Warner items now port from UV to Itunes (vice versa). I don't have an Apple 4K device so I can't say if the 4K ports through, but it is UHD in Vudu.

Just link MA/VUDU/Itunes and redeem the UV codes either at UV/VUDU or MA
Last edited: Oct 21, 2017

David Norman said:
Movie Anywhere has eliminated some of that problem with some studios. Warner items now port from UV to Itunes (vice versa). I don't have an Apple 4K device so I can't say if the 4K ports through, but it is UHD in Vudu.

Just link MA/VUDU/Itunes and redeem the UV codes either at UV/VUDU or MA
Click to expand...

It ports over to iTunes in 4K.
You must log in or register to reply here. 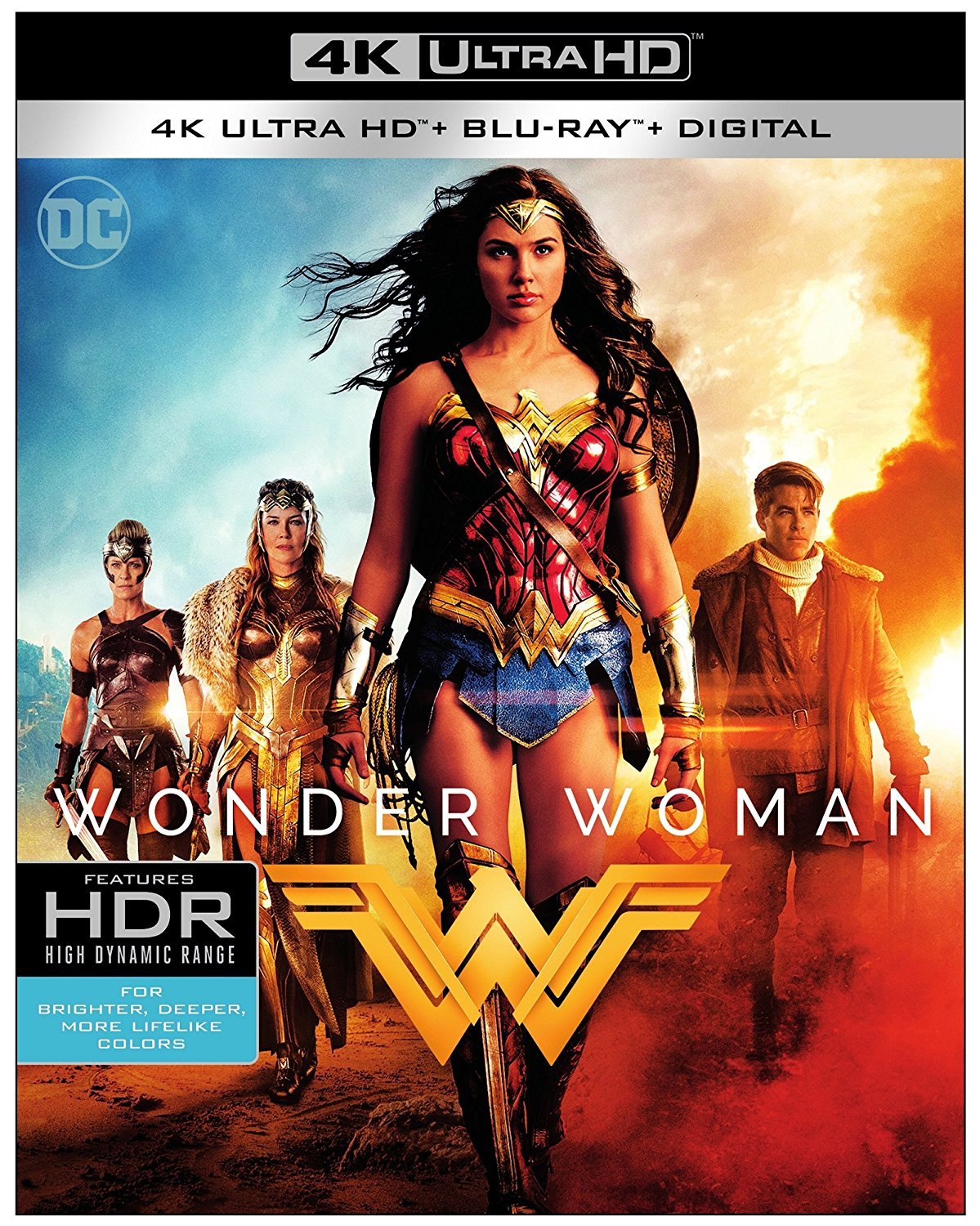