Forum List What's new Dark Style Change width
Log in Register
What's new Search
Menu
Log in
Register
Navigation
Install the app
More options
Dark Style
Close Menu
Posted on July 30, 2020 by Todd Erwin
You are using an out of date browser. It may not display this or other websites correctly.
You should upgrade or use an alternative browser.
Not as wonderful as I remember 3.5 Stars

Originally scheduled as a tie-in to the theatrical release of Wonder Woman 1984, Warner Archive has released all three seasons of the 1970s television series Wonder Woman in a 10-disc Blu-ray set.

In its day, Wonder Woman was something of a ground-breaking series on network television. It was a return to prime time of a comic book character, but it was also centered around a strong (in more ways than one) female character. It was also Lynda Carter’s breakthrough role, as legend tells that relatively unknown Carter was nearly penniless when she was offered the role of Wonder Woman.

It was a rocky start for the series after a failed pilot that aired in 1974, starring Cathy Lee Crosby in the title role, as a blonde. A new pilot was commissioned the following year, under the supervision of Executive Producer Douglas S. Cramer (The Love Boat, Dynasty), and despite the ratings success, the ABC network was still very unsure about the series, airing the first season’s 14 episodes sporadically between April 1976 and February 1977. The first season of Wonder Woman was a period-piece, set during World War II, adding additional cost to the production, which also made the network and the studio, Warner Bros, nervous about connecting with its core young audience. When ABC was dragging its feet on renewing the series for a second season, the CBS network swooped in and picked up the series, as long as it now took place in the present (mid 1970s). This caused some major retooling, causing many supporting characters to leave the series, obviously. However, actor Lyle Waggoner, who portrayed war hero Steve Trevor in the first season, did return as his son, Steve Jr. This obviously complicated the implied love chemistry between Diana/Wonder Woman and Steve Trevor from the first season, ultimately delegating Steve Jr. to a much smaller role. As with most fantasy-themed series from that era, the writers and producers struggled with interesting stories within the show’s budgetary constrains (visual effects were much more time-consuming and expensive having to be done mostly with opticals rather than computer), and the plots became rather silly as the series progressed. The worst episode of the first season, Wonder Woman vs Gargantua, had Wonder Woman fighting a man in an ape suit. The second and third seasons found Wonder Woman solving local crimes rather than tracking down Nazis and saving the world. Further retooling for season three, trying to make the show more “hip” by not only giving the theme song more of a disco beat, but introducing even more ludicrous plots like having people pose as statues to rob museums, disco music robbing people of their minds, a heist involving time travel, killer dolphins, alien invasions, etc., ultimately caused CBS to cancel the series.

Not all is lost, though, in viewing these “time capsules” of 1970s television, as the producers always seemed to bring in some great guest stars, like Kenneth Mars and Henry Gibson as Nazis (in the pilot episode), Cloris Leachman, Fannie Flagg, Red Buttong, Stella Stevens, Carolyn Jones, the late John Saxon, Beatrice Straight, Roddy McDowall, Robert Reed, Frank Gorshin, and Ron Ely, to name just a few. The real joy, though, is seeing some actors in their first roles, such as Debra Winger as Diana/Wonder Woman’s younger sister Drusilla/Wonder Girl, Ed Begley, Jr., Priscilla Barnes, and many others.

Warner Archive’s Wonder Woman: The Complete Collection presents each episode in its original broadcast aspect ratio of 1.33:1 in 1080p using the AVC codec. Overall, these are fairly decent transfers, but I think one has to keep in mind that the shows were originally filmed to be viewed on a standard definition television screen no larger 25-inches, which may explain some of the inconsistent softness in the picture, with opticals suffering the most. The worst offender is the cockpit sequence aboard the invisible plane in the pilot, as it appears the effects were rendered on video mand then output to film. There are some noticeable color inconsistencies as well, such as the reds Wonder Woman’s costume during the pilot occasionally appearing orange. Also, color tones are often on the cooler side, with whites sometimes appearing quite blue.

Warner Archive has fitted the episodes on this 10-disc set with rather ho-hum Dolby Digital 2.0 mono soundtracks, encoded at the standard 192 kbps bitrate. The tracks aren’t horrible, and they just sound average. Dialogue is well-prioritized, always coming across clear and understandable (although there does seem to be a minor glitch in episode 107, Wonder Woman vs Gargantua with one word of dialogue being repeated after an audible pop). Dynamic range is adequate, lacking in low frequencies. However, the series was never meant to be heard on anything more than a small TV speaker.

All of the bonus material has been ported over from previous DVD releases of the series.

Disc One:
Audio Commentary with Lynda Carter and Executive Producer Douglas S. Cramer on Pilot: The New Original Wonder Woman: The two discuss the casting process for the title role and shooting the entire series.

Disc Six:
Revolutionizing a Classic: From Comic Book to Television (480i; 11:26): Adapting the comic book for the small screen, featuring interviews with many of the same personnel from the previous featurette.

Disc Seven:
Audio Commentary with Lynda Carter on My Teenage Idol is Missing: Carter discusses working with teen idol Leif Garrett on this season three opener, plus her experiences working on the series.

I remember, as a kid growing up in the 1970s, watching Wonder Woman every week on television and really enjoying it. Forty-five years later, the show does not quite hold up. The presentation on Blu-ray is probably the best these shows are ever going to look, so fans will likely want to pick this up.

My theory about the audio glitch: It was a reel change error. The extra word was supposed to be excised in the lab, but was left in by mistake, causing a repeat (similar to The Wizard of Oz error that WB corrected.) It is exactly 2 seconds before the end of the shot (the same amount of time for a standard audio track pullup at a reel change) and the shot wobbles at the end, suggesting the end of the reel.
The mistake doesn't occur on the dvd (presumably because that was taken from an IP instead), but did occur on the first 16:9 streaming version.

Just received my copy last night and after sampling a few scenes it's easily worth the increase of $0.25 per episode over the DVD set.

I'd say so, that's only a dollar more than my local Walmart's price for the DVD set. Is that an internet order with Target or is it in store?
Last edited: Jul 31, 2020

I never picked up the DVDs past season 1, so I'll have to get this BD set eventually.

morasp said:
I'd say so, that's only a dollar more than my local Walmart's price for the DVD set. Is that an internet order with Target or is it in store?
Click to expand...

It was an internet order - pre-order actuallly - during their last Buy 2 get 1 free sale (over a month ago). When I saw they had it as part of the sale I didn't hesitate and combined it with 2 other identically priced sets (the entire order for all 3 was a bit over $108).

BobO'Link said:
It was an internet order - pre-order actuallly - during their last Buy 2 get 1 free sale (over a month ago). When I saw they had it as part of the sale I didn't hesitate and combined it with 2 other identically priced sets (the entire order for all 3 was a bit over $108).
Click to expand...

Thanks, I'll have to start checking their web page.

morasp said:
Thanks, I'll have to start checking their web page.
Click to expand...

They've been doing these B2G1 sales every 3 months or so. I'll try to remember to post when they do the next one.

I don't believe that this release was through Warner Archive. It is just Warner Home Video, which would account for the lossy sound and 6 episodes per disc.

Stella Stevens credit in the opening credits of the pilot episode is missing. It was there on the DVD. 'Special Appearance by Stella Stevens.' Not a good sign.

Makes me wonder what else is possibly missing throughout the set. I'll have to check out the dolphin episode in season 3 to see is the missing scene has been restored.

I just noticed that too. To me it looked like the image kind of froze up and lingered on Red Buttons credit too long and then by the time it resumed we were on the one after Stevens because I'm pretty sure her credit came after Buttons.

Some sets do have the credit. It was corrected midway through the pressing. Contact WB to see if you can get a replacement. Mine has the credit. I contacted them in May about it missing on the digital versions, and they fixed the blu rays.

I checked the episode The Deadly Dolphin and the missing portion is there and the opening credits have been synced up properly.

I'm not sure about contacting WB regarding the missing credit. It's really no big deal to me, I just happened to notice it. Maybe I will. I don't know.

Does "The Man Who Could Not Die" have the opening teaser? The HD version I purchased from Google doesn't have it, instead it starts with the credits. The music for this opening is included on this album.

moviebuff75 said:
Some sets do have the credit. It was corrected midway through the pressing. Contact WB to see if you can get a replacement. Mine has the credit. I contacted them in May about it missing on the digital versions, and they fixed the blu rays.
Click to expand...

My copy has it, too. I saw people remarking on it missing, and I thought, "That's weird; I remember seeing it."

So far, I've just chapter-skipped through the first disc (though watched the opening credits for each one; I had forgotten that "The Feminum Mystique" was written by Barbara Avedon & Barbara Corday of Cagney and Lacey fame).

I agree that the video is perhaps too soft from today's perspective, and the audio isn't dynamic, but it's pretty much what I expect from a TV show of this vintage with lots of layered optical effects.

If I have any complaint so far, it's having seven 50-minute episodes per disc for the first season -- and more for Disc 1, as the pilot is well over that length.
T

Well, I emailed Warner Home Video customer service over two weeks ago and have not received a reply. Kind of what I expected. That's too bad. I guess the missing credit issue isn't going to be addressed. The only way to get a correct copy is to buy another one and send this one back.
You must log in or register to reply here. 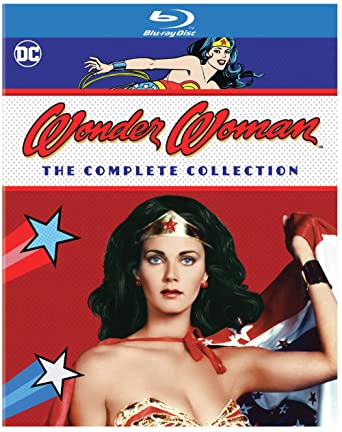