Forum List What's new Dark Style Change width
Log in Register
What's new Search
Menu
Log in
Register
Navigation
Install the app
More options
Dark Style
Close Menu
Posted on August 16, 2016 by Matt Hough
You are using an out of date browser. It may not display this or other websites correctly.
You should upgrade or use an alternative browser.
A masterpiece of cinematic style and substance 4.5 Stars

One of the great achievements of Japanese cinema and a film that combines fascinating philosophical quandaries within the film while offering mesmerizing video and audio to keep the audience completely hooked, Woman in the Dunes makes a welcome upgrade to high definition from Criterion.

Can over two hours of a movie set in a sandpit be interesting or enlightening? It unquestionably can! Hiroshi Teshigahara’s study of man’s often indomitable spirit, his ingenuity under pressure, and his ability to reformat his priorities when faced with the inevitable gets a stunning display in Woman in the Dunes. It’s one of the great masterworks of world cinema and unquestionably the director’s greatest achievement.

A teacher and entomologist Jumpei Niki (Eiji Okada) on a working beach vacation to study and capture tiger beetles misses his bus and is offered a night’s rest in a widow’s home located in the pit of an enormous sand dune. What he doesn’t know is that the seemingly generous invitation is a trap to find the woman (Kyoko Kishida) companionship as she carries out the unending task of gathering sand for the local factories to turn into cement. With escape seemingly impossible due to the constantly shifting dunes, the man finds himself unable to accept his fate and struggles mightily to discover ways to break out of his confinement.

The amazing cinematography of Hiroshi Segawa often achieves mesmerizing heights as we watch the ebbing and flowing of the personal relationship of the two characters mirrored in the constantly shifting sands of the direful dune. (Shots featuring sand avalanches as well as sand spilling off ridges almost with the fluidity of water are simply breathtaking.) Though the title refers to a “Woman,” it’s the man in the story who constantly draws our attention through his unending schemes to escape, his sometimes right and oftentimes wrong-headed decision making, and in celebrating with him his small triumphs and more frequent disappointments. In some ways, the film is a strange kind of thriller with Toru Takemitsu’s nerve-jangling, often percussive score accompanying the man’s desperate attempts to reason his way out of the pit and then attempting a series of escapes that nature manages to thwart with regularity. There is also a nasty near-rape that sets our teeth on edge as we breathlessly watch. The film’s somewhat twist ending gives the viewer an entirely different set of circumstances to ponder, a sure sign that the writer Kobo Abe and director Hiroshi Teshigahara have done their jobs with masterful precision. With Teshigahara’s direction so interestingly concise that a 147-minute movie is over before we know it, Woman in the Dunes emerges as one of the international cinema’s true gems.

Though there are a handful of brief appearances by minor characters, the film’s two stars carry the burden of the storytelling. Eiji Okada offers a brilliant portrayal of a man going through the seven stages of grief once he realizes that he’s fallen into a trap from which there seems no escape. Whether in anger or in inspiration, the character always rings true, and we follow his machinations with real interest. Kyoko Kishida is referred to as a “hag” by one of the old village men, but she’s actually demure and accommodating throughout showing infinite patience with the “rookie” the villagers have saddled her with as a companion and demonstrating genuine hurt when his first successful attempt to leave the pit falters and he’s returned to her.

The film’s original 1.33:1 theatrical aspect ratio is faithfully rendered in a 1080p transfer using the AVC codec. The image is quite sharp and unusually beautiful most of the time with its outstanding grayscale. Blacks vary a bit from rich and deep to a bit milkier in selected shots, and whites are solid and more in control than they were in the 2007 DVD release of the film. The image has been wonderfully cleaned up, but there are a couple of stray hairs that momentarily appear, likely a part of the original photography. The white subtitles are always easy to read. The film has been divided into 26 chapters.

The PCM 1.0 (1.1 Mbps) sound mix is mostly solid. Though clean-up of age-related artifacts has likely been extensive, there is still present occasional hiss and also a bit of flutter in select spots. Otherwise, dialogue is post-dubbed but more present that most post-synched films, and the music and sound effects combine to make for an eerie and engrossing experience.

Video Essay (29:22, HD): critic James Quandt offers a video critique of the film’s themes by means of very thoughtful analysis, historical background on the director, knowledge of Japanese customs and traditions, and the film’s place in terms of world cinema.

Teshigahara and Abe (34:53, HD): 2007 documentary on the collaboration between author Kobo Abe and director Hiroshi Teshigahara. Though their working relationship is certainly discussed by a collection of scholars and critics on hand including Donald Richie, Tadao Sato, Richard Peña, Arata Isozaki, Noriko Nomura, and John Nathan, the focus is definitely more on Teshigahara with the featurette amounting to a nice mini-biography of the talented artist’s life.

Hokusai (19:53, HD): an examination of the life of wood block artist Katsushika Hokusai with voiceover narration providing facts about the man while visually we see many examples of his art.

Ikebana (32:28, HD): made in 1956, it focuses on the Sogetsu School which teaches the arts of sculpturing, pottery making, and flower arranging. It was founded and run by Teshigahara’s father Sofu who features prominently in the documentary, and it concludes with a look at his father’s one-man show in Tokyo.

Tokyo 1958 (24:00, HD): a tongue-in-cheek piece made by the director in collaboration with eight other filmmakers as they give the audience a tour of the (then) world’s largest city, but possibly not to the places one might be expecting to go.

Ako (28:41, HD): spends a day off with a young girl and several of her friends as they look for ways to spend their free time. This film contains genuine characters that hold one’s interest and even some conflict and a bit of tension before it concludes.

29-Page Booklet: contains the cast and crew list, information on the film’s transfer, a collection of black and white stills from the movie, a think piece of the film by film scholar Audie Bock, and an interview with director Teshigahara conducted for a book on Japanese cinema by Max Tessier.

One of the great achievements of Japanese cinema and a film that combines fascinating philosophical quandaries within the film while offering mesmerizing video and audio to keep the audience completely hooked, Woman in the Dunes makes a welcome upgrade to high definition from Criterion. Highly recommended! 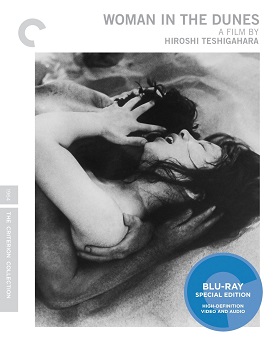