Forum List What's new Dark Style Change width
Log in Register
What's new Search
Menu
Log in
Register
Navigation
Install the app
More options
Dark Style
Close Menu
Posted on June 2, 2018 by Josh Steinberg
You are using an out of date browser. It may not display this or other websites correctly.
You should upgrade or use an alternative browser.
Brilliant new restoration of the Cinemiracle travelogue 5 Stars

Windjammer: The Voyage Of The Christian Radich was the first and only feature made in the Cinemiracle process, which was nearly identical to Cinerama. While the film was originally released on Blu-ray in 2012 sourced from less than ideal elements, this new restoration returns to the original three panel elements to create a truly stunning presentation.

Windjammer: The Voyage Of The Christian Radich was the first and only feature to be made in the Cinemiracle process, which was an attempt to compete with Cinerama. Utilizing a very similar three camera setup and complementing that with seven-track audio, the process was not long lived, but this one film nonetheless manages to impress. Released six years after This Is Cinerama took the world by storm, Windjammer retains the travelogue format but subtlety improves on the execution.

The Christian Radich was a Norwegian training ship, where teenage boys would learn to sail by going on adventures around the world. By following a single crew as it traveled the world, the film has a slightly more narrative shape than This Is Cinerama, but is still able to present a variety of locations. The film opens with a color prologue shot in conventional 35mm Academy ratio, showing the boys preparing the ship to leave dock. Once the ship sets sail, the screen opens up for a full three panel display, allowing the ocean setting to completely immerse the viewer. From there, the crew travels to various locations from Oslo to the Caribbean and New York City, before finally heading back home to Norway.

This is a much livelier film than This Is Cinerama. By following the voyage of a single training ship, rather than simply hopping from location to location, the audience is able to settle in with recurring characters. The ship itself becomes a character in its own right, and the footage of the Christian Radich sailing the open seas is truly breathtaking; one shot in particular, taken from a submarine surfacing to reveal the Christian Radich on the horizon, is stunning. The film has various musical performances throughout, from the boys on the ship to local musicians in the different locations visited. Whether it’s a calypso performance in Trinidad or the great Puerto Rican cellist Pablo Casals, the music is a treat throughout.

While some elements of drama are included in the film which may not have been entirely truthful and/or shifted around to create more narrative tension (including the search for a lost dog and news of a sister ship meeting an untimely fate), the film is ultimately a light-hearted travelogue that serves as a delightful time capsule to an era that’s since passed. While the film is perfectly entertaining in its own right, it is even more delightful if you happen to have a connection to any of the locations visited. Though the film runs well over two hours, it is well paced and seems to fly by in half that time.

While the film was clearly designed to be seen on the largest screens possible, this new restoration is still a stunning achievement to view on a home screen. (I found that sitting slightly closer to the screen than I usually would, while trying to focus my vision primarily on the center panel, allowed me to shut out the rest of the world pretty effectively and to get sucked into the film.) HTF’s own David Strohmaier is responsible for the restoration on display here, and it is remarkable what he and his team have achieved.

Windjammer: The Voyage Of The Christian Radich is presented in the Smilebox format to preserve both the original aspect ratio and screen geometry of the original Cinemiracle presentation. Working with original three panel elements for this restoration, the presentation here is a tremendous improvement over the previous disc edition for this title. For the majority of the films, the join lines have been completely eliminated. For the few portions where they do remain, their presence is minimal and unobtrusive. The blending of the panels here is no less than a miracle, and the blends here are even more impressive than on the new This Is Cinerama disc. The matching of color between the panels is excellent. If there is a minor nitpick, it’s that the color here is at times slightly weaker overall than on This Is Cinerama, but this is truly a minor quibble considering how breathtaking the overwhelming majority of the film appears. Clarity and fine detail are frequently stunning. Age-related artifacts like scratches and debris have been almost completely eliminated. This is a remarkable presentation.

The DTS-HD MA 5.1 lossless audio track is truly stunning, presenting an incredibly dimension sound mix that emphasizes the multi-track sound capabilities of the Cinemiracle format. This is a wide and engaging soundscape which places the viewer in the middle of the action, whether that happens to be in the middle of the ocean, sitting in on a musical performance or hanging out by the docks. This immersive track perfectly complements the visuals onscreen and is almost entirely free of age-related artifacts.

There are no subtitles available for the main feature.

The Windjammer Voyage: A Cinemiracle Adventure (56:30, HD) – A detailed look into the production of the film, with information both about the film’s technical achievements as well as the cast and crew. This is a wonderful documentary which puts the film into its proper historical context, while also shedding light on how and why certain scenes had to be staged for the camera.

The Reconstruction of Windjammer (14:58 HD) – An incredible look into the new restoration of the film that is one of the best of its kind; it may even be worth viewing in advance of the main feature.

The Windjammer Breakdown Reel (13:53, HD) – This breakdown reel, prepared to be shown in the event of a technical malfunction during a feature presentation, has the young sailors from the film presenting clips not seen in the main feature. While the picture quality is not quite as good as the main feature, it’s more than good enough. Since a breakdown is unlikely on home equipment, this makes for a great “intermission” viewing option.

The Christian Radich Today (6:16, HD) – A featurette created on the occasion of the Denmark Tall Ships Festival in 2010.

Trailer (2:59, HD) – A recreation of the film’s original theatrical trailer using footage from the new restoration.

Behind The Scenes Slideshow (9:09, HD) – A slideshow of behind the scenes images from the production of the film, complemented by selections from the film’s score.

Cinemiracle Showplaces Slideshow (16:15, HD) – A slideshow featuring photos, newspaper clippings and blueprints of the venues where the film was originally exhibited, complemented by selections from the film’s score.

Booklet – A 12-page full color booklet which includes an essay by Randy Gitsch and a selection of stills from the film and promotional artwork.

This new presentation of Windjammer: The Voyage Of The Christian Radich from Flicker Alley is a treat for fans of three panel films, and one of the better travelogues made in the immersive format. The new restoration here represents a significant upgrade from the earlier disc, and the bonus features are wonderfully insightful. This is a top notch release well worth a look.

Shadow in the Cloud [Blu-ray]

Link is not clickable.

The link at the top of the graphic works for me as well. Maybe you are clicking on the odd "[review]" at the bottom of the post, which leads nowhere.

Yes, I was clicking on "review" because - it's usually clickable. What do I know?
J

Not sure where to post this but this seemed as good as any.
Windjammer- I saw for the first time at John Mitchell's Cinerama setup in North Sydney.
I have just heard today that he passed away at age 79.
Without his sterling efforts much of our Cinerama legacy would have vanished.
He will be remembered with much affection by Cinerama fans worldwide ,i'm sure.
C

john a hunter said:
Not sure where to post this but this seemed as good as any.
Windjammer- I saw for the first time at John Mitchell's Cinerama setup in North Sydney.
I have just heard today that he passed away at age 79.
Without his sterling efforts much of our Cinerama legacy would have vanished.
He will be remembered with much affection by Cinerama fans worldwide ,i'm sure.
Click to expand...

I saw films at John's about 18 times -all the 3-strip films (10 in total) and even a Kinopanorama short film that was filmed in Sydney and which I was fortunate enough to go on location a few times when filming.I still have some 3 strip frames of myself. Managed to meet Search For Paradise Director Otto Lang at John's and watch his film in 3 strip with him. Great memories.
You must log in or register to reply here. 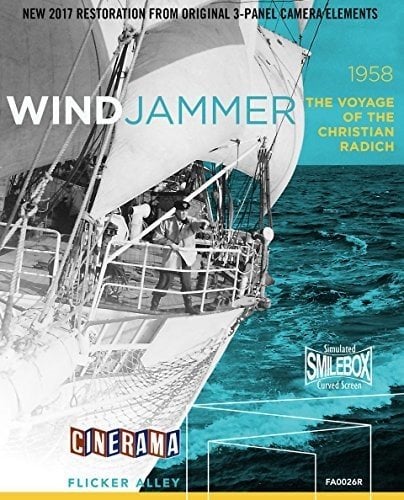