Forum List What's new Dark Style Change width
Log in Register
What's new Search
Menu
Log in
Register
Navigation
Install the app
More options
Dark Style
Close Menu
Posted on May 11, 2018 by Sam Posten
You are using an out of date browser. It may not display this or other websites correctly.
You should upgrade or use an alternative browser.
Classy and classic old school horror with modern production values and terrific leads. Recommended 4 Stars

Sarah Lockwood Winchester (Helen Mirren), widow and heiress to the Winchester Repeating Arms Company, has retreated from Connecticut to a home she is building in California. No mere bungalow, the house is a sprawling mansion with hundreds of rooms, a maze of connections, and doors that open upon dangerous drops. She insists that she can see and talk to spirits, and may be building rooms to appease the anger of Winchester rifle shooting victims. This has raised the concern of the company. Psychologist Dr. Eric Price (Jason Clarke) is brought in to evaluate whether Sarah is capable of managing rational decisions needed to lead the company’s operations. Price has had his own encounters with death in the past, and his judgement is questionably impaired by the memories of those events as well. 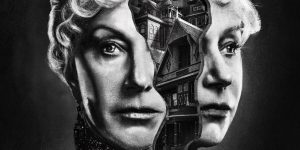 I’m sure that I saw at least one full trailer for Winchester and put it in the back of my mind as a goofy horror flick I might get around to someday without much urgency.  I could not have been more wrong.  What I found instead was a smart take on a classic haunting tale, with modern execution.  It’s beautifully shot, eschews CGI and employs in camera effects, and takes great advantage of surround sound to put the viewer in the middle of a environment that gets more dangerous by the minute. 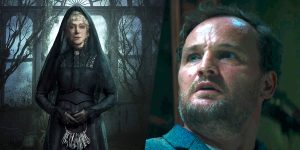 The Spierig Brothers seem to have taken great care to have believable characters who genuinely seem to have real motivations and back stories.   They grounded the story with the real events of Sarah’s life and have created a fictitious haunting that is in line with her history.  There are a few jump scares but no blood or gore.  I was struck by the classic structure and execution, reminding me of many great Vincent Price haunted tales I loved in my youth.

They really scored big by getting Helen Mirren to sign on.  She is perfectly cast as someone you can believe is strong willed, aristocratic, and powerful, yet empathetic enough to believe that she is capable of communing with spirits.  In quite a contrast, I just saw her last week in Eye in the Sky, which is a modern military drama which I heartily recommend.  Despite the hundred years of difference between them, you can see many parallels in the confident women that these roles portray.  Jason Clarke is also an inspired choice for a foil to Mirren.  His scalawag psychologist Dr. Price provides a more likable point of view for the audience to follow as we peel the onion back on the Winchester House and Sarah herself, while slowly discovering that Price has secrets of his own. 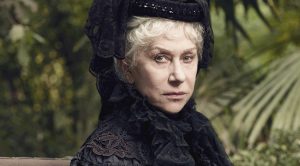 The coolest part of Winchester is that it is grounded in the real life of Sarah Winchester.  She did claim to talk to spirits.  She did build a mansion to house them.  She did get trapped in the house under mysterious circumstances.  If, like me, you get to the end of Winchester and want to know more about where reality and Hollywood diverge, I recommend this article:

I watched Winchester on both an iPad Pro and then a second time upconverted to 4k via projector.  Both looked terrific for 1080p material, with the projected image having depth and clarity befitting a modern transfer.  Grain was minimal and pleasant in the many very-dark segments, colors popped nicely both indoors and out, and there wasn’t ever a hint of ringing or other artifacts.  Details on faces and especially the great costumes was readily apparent. 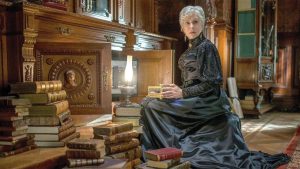 Strangely Lionsgate has chosen not to put out a 4k version.  Not sure why that is but this is a very good HD release.

Presented in 5.1 DTS-HD Master Audio, I can only speculate on what delta in quality there might have been on a UHD with Dolby Atmos.  Because what IS on the audio track is outstanding, with spatial imaging that moves sounds to all corners nicely.  Deep rumbles emanate from spirits and nature alike, and there are a number of rifle shots that whiz past the listener as well.  Peter Spierig’s instrumental soundtrack is inspired, with cues that hint at incoming jump scares, tie characters to the action, and ramp up the spiritual dread.  I liked it so much I bought it on iTunes! 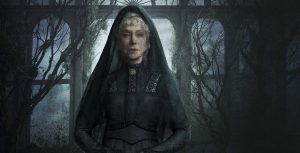 The only extras are a 15 minute Making Of segment titled Driven By the Spirits.  I heartily recommend that if you want to know how the Spierigs bridged fact and fiction.  I certainly wish there had been even more content along with it tho.

I’m all for horror in the vein that Winchester is mining.  Smart, solid characters, told well with layers unwrapping in ways that make sense.  Mirren and Clarke worked well together, starting off as completely untrusting of each other and keeping secrets, and then building towards understanding as these blocks get knocked away and the real villains emerge.  It’s shot beautifully, employs traditional effects, and does all the right things in the soundtrack department.  Sure, we can ask for more features and a 4K release, but for a regular blu it’s a solid disk.

Yes. I really liked this movie too. Surprisingly one of my favorite movies of 2018 so far.

Thanks for the review, Sam. I was on the fence but you pushed me over!

Glad to hear it @Neil Middlemiss =) I was really surprised at how good it is!

Sam Posten said:
Glad to hear it @Neil Middlemiss =) I was really surprised at how good it is!
Click to expand...

I'm surprise to read a positive review of it. This might be a future iTunes purchase for the right price for me.

Robert Crawford said:
I'm surprise to read a positive review of it. This might be a future iTunes purchase for the right price for me.
Click to expand...

14% tomato meter but 37% audience approval. How many of them saw it in a shitty box theater with lousy audio systems??? =)
https://www.rottentomatoes.com/m/winchester/

Or maybe it just hit me at the right time!

Thankfully, "Winchester" leveled my unfair expectations simply by being silly and fun. Most of the film is genuinely atmospheric, thanks especially to the omnipresent construction noises (hammers on chisels, saws through planks) that surround the house. And there are some well-choreographed setpieces, particularly the one where a rifle slowly but surely fires right next to Mirren's head. Clarke gives one of his best performances to date, and even the expository dialogue is florid enough to be enjoyable. Finally: who could resist an eccentrically baroque haunted house brought to life without computer-generated imagery? What "Winchester" lacks in originality its creators make up for in execution.
Click to expand...

Agreed on all points.
https://www.rogerebert.com/reviews/winchester-2018