Long out of print, Disney brings Willow back to Blu-ray in a new edition that combines the special features from Fox’s 2001 DVD and 2013 Blu-ray releases.

Willow is a movie I’ve noticed over the years that most people either love or hate, with very few finding it as just a passable entertainment. Personally, I’ve always enjoyed it since it’s theatrical release in May of 1988. Ron Howard’s blend of spectacle, humor, thrilling action scenes, and wonderful performances by its three main and unlikely stars (Val Kilmer, Joanne Whalley, Warwick Davis) are the elements that sold me on it, and still do to this day.

Legend foretells of a child born with a distinct birthmark will be the downfall of the evil Queen Bavmorda (Jean Marsh), who orders that all pregnant women be imprisoned so that each child can be identified as they are born. A midwife discovers such a child, Elora Danan, and escapes Bavmorda’s prison with the child, caring for it as she travels across the land in search of a safe place for the child to grow up despite being chased by Bavmorda’s daughter Sorsha (Joanne Whalley) and General Kael (Pat Roach), eventually placing her in a basket to float downstream to a village inhabited by dwarves, and found by the children of farmer and budding sorcerer apprentice Willow Ufgood (Warwick Davis). The High Aldwin (Billy Barty) sends Willow with a band of travelers to return Elora to her people. Along the way they meet up with a rogue and banished swordsman, Madmartigan (Val Kilmer), who agrees to take Elora off Willow’s hands, only to have the child stolen by a team of Brownies (little people the size of mice) led by Rool (Kevin Pollak) and Franjean (Rick Overton), who return the child to Willow, who soon learns of Elora’s fate and the prophecy from fairy queen Cherlindrea. Willow finds that he is on a new quest, to take Elora to sorceress Fin Raziel (Patricia Hayes), the only one powerful enough to overtake Bavmorda.

I remember Willow being criticized for very liberally borrowing from various well-known pieces of literature, including the book of Exodus from the Bible,The Lord of the Rings, Snow White and the Seven Dwarfs, even George Lucas’ Star Wars (credited as Executive Producer and Story contributor). And, yes, that is true – Elora’s escape from Bavmorda is very similar to the story of Moses (at least his birth), Queen Bavmorda is a spitting image of the evil Queen from Disney’s Snow White, the team of Rool and Franjean are the comic relief equivalents of C3PO and R2D2 and General Kael a medieval stand-in for Darth Vader from Star Wars. Director Ron Howard injects such a sense of fun throughout the entire movie that it is easy to look past those idiosyncrasies, and the rousing swashbuckling score by James Horner (one of my all-time favorite scores) helps tremendously. The visual effects by Industrial Light and Magic, which were ground-breaking at the time if the movie’s release, hold up for the most part. Willow was made just before digital compositing, so nearly all of the effects were still analog. In other words, the effects had to be photographed using multiple passes through a camera, sometimes combining multiple sources of footage to make up one image. It is the sequences with the Brownies that suffer the most, with very obvious black blobs occasionally rearing their ugly heads around them. The one shot that puts Willow on the map for visual effects breakthroughs was its morphing shot of Fin Raziel eventually taking her human form (the first time the technology was ever used in a motion picture), is still mesmerizing when taken into that context, but appears dated when you consider how quickly that technology evolved and was subsequently overused. That all being said, I still had a smile on my face as the end credits rolled on this most recent viewing of Willow, my first in several years, and just as entertaining as the first time I saw it in 70mm at the Century Cinedome in Orange, California.

It is hard to say if this is the same transfer used on the 25th Anniversary Blu-ray release from Fox in 2013 (that came and went from shelves in a blink of an eye), as I never got the chance to pick that up. I will say that it is a major step up from the 2001 Fox DVD. This is a fairly clean image, although I did notice a very minute speck of dirt less than a handful of times throughout the movie. The 1080p AVC-encoded transfer retains the film’s original theatrical aspect ratio of approximately 2.39:1. Colors are solid and natural, perhaps not as vivid as a more modern film that was shot digitally (Willow was shot on 35mm film, way before the days of digital), but the image also does not appear to be overly processed using digital tools to make it appear more modern. On the whole, detail is superb, with excellent texture rendering of the woven costumes (you can easily see each stitch in Willow’s costume during mid-shots), although some of the more optically manipulated effects shots do have an overall softness to them. Film grain is present and natural, never intrusive. Contrast is average to very good, with black levels that are about as deep as very dark grey, but that is how I remember this film in its original 70mm engagements.

Based on reviews of the previous Blu-ray release, I’d say this could very well be the same exact DTS-HD Master Audio 5.1 track and mix. This is a very lively and active mix, with stereo surrounds and a strong LFE presence. The action scenes really come alive, with sounds coming from all around you and James Horner’s score filling the listening area. Dialogue is clear and understandable throughout with excellent panning of characters as the mover around on and off screen. Sadly, though, the original 2.0 stereo mix has not been included.

Audio Commentary with Warwick Davis: Originally recorded for the 2001 DVD, Davis speaks very casually and fluidly about his experiences in making the film.

Willow: Deleted Scenes with Ron Howard (1080p; 12:30): Directrr Ron Howard discusses and introduces several sequences and scenes that were deleted either due to time or (as in the case of the Fish Boy sequence) just were not working.

Willow: An Unlikely Hero – Personal Video Diary of Warwick Davis (1080p; 10:51): Warwick Davis reflects on his experiences making the film through narration and his own home movies.

Matte Paintings (1080p; 1:08): A look at some of the matte paintings used in the film and how they were incorporated into the finished shot.

“W” (1080p; 0:28): Warwick Davis quickly discusses how all of the characters he has played in Lucasfilm productions have all begun with the letter “W.” The interview was recorded initially for the previous Blu-ray release (based on the 2013 copyright date). The trend continued since then with Wollivan in Force Awakens, Weeteef Cyubee in Rogue One, Wodibin in The Last Jedi, and Weazel in Solo (although he did voice Rukh in the TV series Star Wars Rebels).

The Making of Raziel’s Transformation (480i; 8:15): A vintage EPK piece produced by ILM on the infamous morphing sequence.

I’ve always enjoyed Willow, although it may not be everyone’s cup of tea. Disney’s unofficial 30th anniversary Blu-ray release may be the most feature-filled version to date, and I’m certainly glad the movie is available once again. 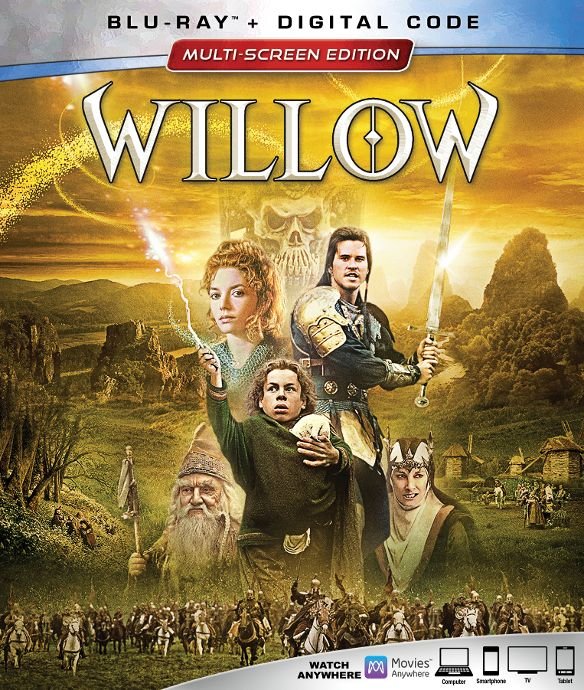