In his 1957 production of Will Success Spoil Rock Hunter?, writer-producer-director Frank Tashlin throws just about everything at the screen, and miraculously, pretty much all of it sticks.

Will Success Spoil Rock Hunter? Probably not, the film concludes, but it can make a person miserable.

Tony Randall stars as the titular hero, a lowly writer of television commercials looking to climb up the ladder of the advertising agency he works at. When Hunter finds out that his firm is due to lose their biggest account, from the Stay-Put Lipstick Company, Hunter comes up with a brilliant idea for a campaign to be fronted by a famous actress known for having kissable lips, the blonde bombshell Rita Marlowe (played by Jayne Mansfield in one of her signature roles). Rita is willing to do it, but only if Hunter pretends to be her boyfriend; Rita thinks her real-life boyfriend Bobo (Mickey Hargitay) isn’t paying enough attention to her and wants to make him jealous. (Rita still longs for her first true love, long out of the picture.) Once Rita announces that she’s seeing Hunter, he becomes an overnight sensation known as “Lover Doll,” and his employers are all too happy to take advantage of the publicity that it brings to their firm. However, Hunter’s fiancé Jenny (Betsy Drake) is not a fan of this arrangement. As Hunter becomes more successful at work due to this deception, his personal life falls apart, with each bit of fame extracting an additional toll.

The film, adapted very loosely from a stage play George Axelrod, gives writer-producer-director Frank Tashlin the perfect canvas to satirize, well, just about everything. The film eschews the traditional 20th Century Fox logo opening in favor of an amusing prologue featuring fake television commercials where the products being demonstrated fail at the worst possible moments. Once the story proper begins, each scene is packed with little references and easter eggs, each perfectly hitting its target. That Mansfield’s character is also a famous movie star allows Tashlin to drop real life references from Mansfield’s career into the film. And the casting of Rita’s original true love, which is revealed in the film’s final moments, is too brilliant to spoil here.

But for all of the film’s references and fantastic supporting cast (which also includes Joan Blondell as Rita’s personal assistant and John Williams as Hunter’s boss), a great deal of the heavy lifting falls onto Randall’s shoulders, and he’s up for the challenge. One of Randall’s great strengths as a comedic actor is his ability to to portray characters becoming increasingly frazzled and frustrated, but doing so in such a way that allows the audience to laugh at the situations, and on behalf of the character, without ever feeling the stress or strain that the character is suffering under. Randall’s performance here is the glue which holds everything together.

Will Success Spoil Rock Hunter? is presented in its original aspect ratio of 2.35:1. The image is perfectly clean and clear, with excellent stability, strong detail and a pleasing film-like look. What may cause some controversy is the film’s use of the color blue and how that is represented in the transfer. There is no doubt that the film’s production design includes heavy use of the color blue, from shirts worn by main characters to colored gels used on studio lights to suggest nighttime settings. There are scenes in which a lot of the color palette seems to be blue, but upon closer examination, other colors can be seen as they should be. For instance, there is a scene with Mansfield in her hotel room late at night; at first glance, it might appear to lean blue, but on closer reflection, Mansfield’s nightgown is clearly white with blue trimming, and while the light coming from behind the window shade appears bluish, it’s meant to be nighttime, and the blue is representative of moonlight. However, there are also some scenes which do appear to lean more blue than is necessary. Those who are unfamiliar with the film will likely not notice any issue, and if the color isn’t exactly perfect, it’s still a very watchable transfer.

Three different audio tracks are provided on the disc, all in the lossless DTS-HD MA format. The 4.0 track represents the film’s original theatrical audio, and is a lively track filled with directional dialogue and sound effects. The 5.1 track retains all of the dimensionality of the 4.0 track but sounds a little fuller and clearer, making it the preferred option. The included 2.0 track, while lacking some of the dimensionality of the other mixes, is nonetheless an acceptable option presented with good fidelity which is probably best suited for those limited to stereo playback.

Audio Commentary with Film Historian Dana Polan – Polan’s commentary covers a great deal of ground on the film’s production and Tashlin’s influences; academic without being dry, it’s a worthwhile listen.

Fox Movietone Newsreels (9:39, SD) – Black and white newsreel footage is presented mostly without sound or context; while it is wonderful that this material is still extant, the lack of even the simplest title card or text indication of what contains is a frustrating omission.

Original Theatrical Trailer (2:23, SD) – This amusing trailer combines clips from the film with behind-the-scenes footage, and has been cropped to 16×9.

Will Success Spoil Rock Hunter? is a delightfully bonkers satire of Hollywood, advertising and pop culture which holds up remarkably well more than sixty years after its original release. This very good Twilight Time release offers a solid presentation of the film while retaining the bonus features from the previous DVD and adding a new isolated score track. 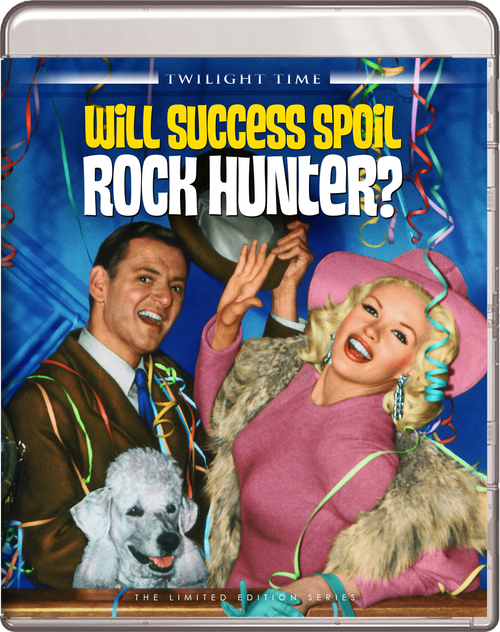