As with so many legendary personalities from the Old West, it’s hard to separate fact from fiction when trying to tell their singular stories, and that’s certainly the case with Walter Hill’s boisterous and somewhat unfocused Wild Bill.

As with so many legendary personalities from the Old West, it’s hard to separate fact from fiction when trying to tell their singular stories, and that’s certainly the case with Walter Hill’s boisterous and somewhat unfocused Wild Bill. Where does the fantasy start and stop when telling his unique life’s tale? Writer-director Hill certainly knows that much of his opus is fanciful, but that doesn’t make it any less entertaining. With a sea of famous faces enacting parts both real and fabricated for the dramatic purposes of the story, Wild Bill spins its story relatively quickly and with a minimum of fuss and bother.

Spottily covering the story of James Butler Hickok (Jeff Bridges) in the eleven-year period following the Civil War, “Wild Bill” as he comes to be known plies many different trades from prospector to actor to town sheriff and territory marshal, but by the time he arrives in Deadwood in the Dakota Territory in 1876 with an alleged trail of broken hearts and dead bodies in his wake, he is making his living as a gambler and notorious celebrity who isn’t above accepting drinks from strangers eager to meet the fabled gunman. Accompanying him are the overly needy Calamity Jane (Ellen Barkin) and best friend Charley Prince (John Hurt), but it’s the introduction of brash youngster Jack McCall (David Arquette) that sets the town’s tongues wagging when he boasts he’s going to kill Bill for the slights to his mother Susannah Moore (Diane Lane), an old flame of Bill’s.

Director Walter Hill’s screenplay manages to pinpoint some of the legendary exploits of the famous gunman: killing five men who ambush him in an 1870 saloon brawl, facing down several former acquaintances (Bruce Dern, Pato Hoffmann, Robert Knott) who claim grievances against him, and his unhappy love affair with Susannah Moore, mostly handled in stylized black and white flashbacks as Hickok partakes of the opium pipe. Like Robert Altman’s Buffalo Bill and the Indians (though with more stylization and less satirical flair), Hill’s title character suffers under the burden of his own notoriety, and by the time the end comes, Bill seems weary of the constant challenges to his marksman skills and the pressure from so many people to be what they want him to be rather than what he himself would like to be. Hill manages to work in out of the blue a sex scene between Bill and Jane in an empty saloon, but those lusty fireworks are only the prelude to the film’s last act. Hill then stages a blazing shootout at the town stable after a protracted and somewhat anticlimactic talky face-off at the saloon when McCall gets the jump on Bill, but McCall’s cowardly final assault, so famous in its own right tied to the poker hand Bill is holding when he receives his fatal wound, is far too well known for the earlier confrontations to carry much suspense.

Jeff Bridges seems to be enjoying playing such a larger-than-life character, and his dexterity with his pistols and some deep soul-searching as he ponders the meaning of his life allow the actor considerable range in his performance. Ellen Barkin makes an adequate but somewhat irritating underfoot Calamity Jane (the role will forever belong to Robin Weigert in HBO’s acclaimed Deadwood), and John Hurt’s Charley Prince, who serves as the film’s insightful narrator, is a fictional character based a bit on Charlie Utter who was Bill’s partner in the last years of his life. David Arquette’s Jack McCall is a wild-eyed, oafish kid given to hysterical outbursts while James Remar and Stoney Jackson make solid impressions as tough hired guns who volunteer to do Jack’s killing for him. Diane Lane is a fetching Susannah Moore in the romantic flashbacks, and James Gammon has some very good scenes as Bill’s trailmate California Joe who has made it his business to spread the legend of his friend across the Pecos. Christina Applegate as a town whore trying to give McCall some courage is more stone-faced than was necessary. The film also offers cameos from a host of famous faces including Marjoe Gortner as a preacher, Bruce Dern as one of Bill’s victims who comes looking for revenge, and Keith Carradine as Buffalo Bill Cody who takes Wild Bill under his wing during his sojourn on the stage in Cody’s Wild West Show.

The film’s 1.85:1 theatrical aspect ratio is faithfully rendered in a 1080p transfer using the AVC codec. Sharpness is quite revealing especially in close-ups as details in facial features, hair, and clothes are readily apparent. Color is also well controlled with very believable skin tones. The black and white memory sequences have been bleached to blooming deliberately to effect Bill’s opium delusions, but otherwise contrast has been nicely and consistently applied. The movie has been divided into 24 chapters.

The disc offers two lossless soundtracks: DTS-HD Master Audio 2.0 stereo and 5.1 surround encodes, and both are excellent achievements. Dialogue has been relegated to the center channel while the background music gets sent to the front and rear soundstages. Ambient effects aren’t as immersive as in more recent films, of course, but the gunfights and brawls do carry some impressive weight.

Six-Page Booklet: contains some color stills and cast portraits, original poster art on the back cover, and film historian Julie Kirgo’s thoughtful estimation of the film.

Wild Bill may be more fiction than fact, but for fans of westerns, it’s got some weight to it with its admirable cast of actors on display and a first-rate director helming some memorable action set pieces (even if the best ones come in small bursts). There are only 3,000 copies of this Blu-ray available. Those interested in purchasing it should go to either www.twilighttimemovies.com or www.screenarchives.com to see if product is still in stock. Information about the movie can also be found via Facebook at www.facebook.com/twilighttimemovies. 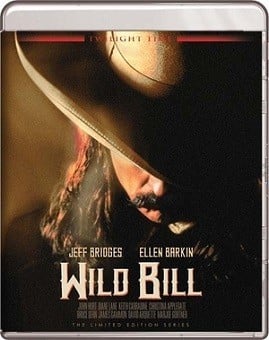