A kind of slick variation on his own Meet the Parents, John Hamburg’s Why Him? offers another situation of a potential husband meeting disapproving parents with a reasonable quota of slapstick situations, riotous visual motifs, and the off-the-wall improvisation from a group of very talented comic performers.

A kind of slick variation on his own Meet the Parents, John Hamburg’s Why Him? offers another situation of a potential husband meeting disapproving parents with a reasonable quota of slapstick situations, riotous visual motifs, and the off-the-wall improvisation from a group of very talented comic performers. The wryness of Meet the Parents is inevitably funnier than the crasser and more obvious shenanigans of Why Him? but there are plenty of laughs here, and a fine cast is giving their all for this rather predictable situation comedy.

Springing a boy friend of almost a year on her parents just as the Christmas holidays are approaching, Stanford pre-law student Stephanie Fleming (Zoey Deutch) asks her parents Ned (Bryan Cranston) and Barb (Megan Mullally) and younger brother Scotty (Griffin Gluck) to join her and potential mate, Silicon Valley entrepreneur Laird Mayhew (James Franco), at his home to celebrate the season. Though fantastically wealthy, Laird is one of those tech geniuses without an ounce of guile but also without any kind of filter to adapt to social situations, and the Fleming parents are speechless at what they perceive is the seeming incompatibility between their daughter and the eager-to-please but foul-mouthed whiz kid despite his ultramodern home, petting zoo grounds, and a household staff that often seems as if it’s arrived from Mars. Ned is determined to make his daughter see the error of her ways, but Barb and especially Scotty get Laird’s vibe and begin to come over to his side.

Director John Hamburg and his writing partner Ian Helfer have scripted a fairly predictable narrative for their tale: the instant negative knee jerk reactions of the parents to this monumentally rich free spirit and their slow, steady journey toward understanding his point of view and sympathizing with his search for parental figures who care about him and not his money or possessions. There are some howlingly funny scenes (and even funnier outtakes when we see what effort it was to capture these priceless moments): Ned’s trying to negotiate the use of a new Japanese toilet with the assistance of Laird’s Man Friday Gustav (the film’s comic MVP Keegan-Michael Key), Laird and Gustav’s unexpected combat preparations (reminiscent of the encounters between Inspector Clouseau and Kato about which, of course, the two men are unaware), and Barb’s horny reaction to some vaporing. Sure, everything is overdone (a moose sculpture floating in urine is sure to be broken before the movie ends), and the comics go overboard while Cranston’s Ned must keep a stone face through it all, but some of it is very funny, and it’s almost never mean-spirited which in this day and age is a pretty nice trump card to play.

James Franco plays the puppyish innocence and foul-mouthed vulnerability of Laird just perfectly, never forgetting that he has built a tech empire and is proud of his accomplishments with less than a high school education without drowning in his own ego. Bryan Cranston renews his comic timing and slow burn reactions that he honed to perfection for many seasons on TV’s Malcolm in the Middle, and it’s a pleasure to see his character thaw toward the well-meaning if notably doofus nature of Franco’s Laird. Griffin Gluck and Zoey Deutch get right into the spirit of the piece as the two Fleming kids each after his or her own objectives, and Megan Mullally is right there offering solid, slyly witty support as Barb Fleming. Keegan-Michael Key is simply priceless playing the movie’s most cartoonish but entertaining character: part therapist, part masseur, part major domo, part combat instructor; his Gustav is the film’s most winning creation. In smaller roles, you’ll see celebrity chef Richard Blais and terrific comic actors Cedric The Entertainer, Adam Devine, Andrew Rannells, and Casey Wilson along with the voice of Kaley Cuoco.

The film’s theatrical aspect ratio of 1.85:1 is faithfully rendered in this 2160p transfer using the HEVC codec. One of those immaculate transfers that appears as if one is watching events transpire through a clear glass window, the sharpness levels are off the charts here, and the use of HDR highlights not only sparkling things like lights on water and Michigan snow drifts but also makes the creases and crevices in Bryan Cranston’s complexion much more evident than in the Blu-ray version. Color values are typically for a comedy bright and richly saturated without any blooming, and contrast has been applied with professional expertise. The movie has been divided into 24 chapters.

The DTS-HD Master Audio 7.1 sound mix almost seems like overkill for this modest comedy, but the background score by Theodore Shapiro and a rich selection of rock music (KISS songs not only pop up on the soundtrack, but Gene Simmons and Paul Stanley make cameo appearances in the film) and Christmas standards gets nicely spread through the front and rear channels. Dialogue has been expertly recorded and has been placed in the center channel. Atmospheric effects also get a fine placement in appropriate channels with even some panning across the soundstage on occasion.

Audio Commentary: this is the only bonus feature contained on the set’s UHD disc. Director John Hamburg and his co-writer Ian Helfer along with editor Bill Kerr have a jovial conversation about the movie sharing ideas and memories of the production as the movie unfolds. The commentary, of course, is also on the Blu-ray version of the movie.

The other bonuses are contained on the enclosed Blu-ray disc:

47 Minutes on the Can (6:39, HD): director John Hamburg, producer Dan Levine, and actor Keegan-Michael Key reminisce about the entire memory card used in trying to get the famous scene on the Japanese toilet in the can.

Deleted Scenes (31:19, HD): nine deleted and extended scenes which may be viewed separately or in montage.

Gallery (HD): forty-five black and white and color stills made during production.

The familiarity of this kind of situational comedy trope (detested character who won’t go away) may appeal or repel potential viewers of Why Him? but the movie does earns its laughs genuinely and is a diverting way to spend a couple of hours with some talented comic performers. The UHD transfer offers reference visual quality all the way and is the preferred outlet for experiencing this comedy.

Terrible movie, and I thought Franco was totally miscast - he couldn't handle the comedy well at all. Seemed like something meant for Jim Carrey circa 1997...
You must log in or register to reply here. 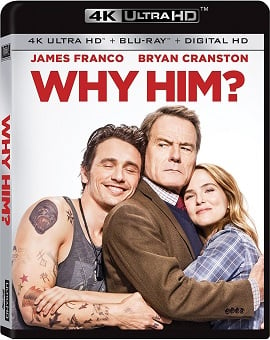