The utter disillusionment and nihilistic attitudes that were products of the Vietnam War are quite palpably and violently represented in Karel Reisz’s Who’ll Stop the Rain.

The utter disillusionment and nihilistic attitudes that were products of the Vietnam War are quite palpably and violently represented in Karel Reisz’s Who’ll Stop the Rain. With a handful of memorable performances and a drug-fueled cat-and-mouse chase at its center, Who’ll Stop the Rain, like many of its 1970s compatriots, paints an ugly and depressing portrait of American attitudes in that era.

Photojournalist John Converse (Michael Moriarty) gets his hands on two kilos of high grade heroin while in Saigon and persuades marine buddy Ray Hicks (Nick Nolte), who’s finishing his tour of duty, to smuggle the drugs stateside and leave them with his wife Marge (Tuesday Weld) for a $1,000 payment. But federal narcotics agent Antheil (Anthony Zerbe) gets wind of the large package that will be at the Converse house and sends two ex-con enforcers (Richard Masur, Ray Sharkey) to intercept it and kill any witnesses. Marge doesn’t have the money Ray was promised, and before she can make good, the two thugs attempt to strong arm their way into the house but are thwarted by Ray who then takes off with Marge to try to find a place of safety. They head to Los Angeles and when that proves unsuccessful, the duo heads to the New Mexico mountains, one of Ray’s old stomping grounds. But Antheil has kidnapped the now returned John and follows the fleeing pair attempting to use him as bait to lure the pair into giving up the drugs.

Based on the best-selling novel Dog Soldiers by Robert Stone, Judith Roscoe and Robert Stone’s screenplay (nominated for a Writers Guild Award, the only real recognition the film received that year) is more concerned with character investigation than in the thrills and spills of the chase underway. In fact, until the climactic encounter between the protagonists and antagonists in New Mexico (though how Antheil was able to track them so easily in an era without GPS chips, drones, or satellite surveillance is something of a mystery), director Karel Reisz doesn’t really ratchet up the tension of the two people on the run. There is a bizarre interlude in Los Angeles as Ray connects with an old hood Eddie Peace (Charles Haid) who then drags Ray and Marge into a drug party with yuppies Gerald (James Cranna) and Jody (Timothy Blake) that pads the running time to an overlong 126 minutes. But the character studies are amazing in the film. In addition to the three principals who each go on a journey of pitiable self-discovery (in Marge’s case, floating on a heroin-induced high to lessen her withdrawal from pain medication), the film offers incisive looks at two other war casualties, the enforcers Danskin and Smitty played so memorably by Richard Masur and Ray Sharkey. Sharkey, in particular, etches such a compelling portrait of an ex-GI/ex-con deluded beyond all hope (he thinks helping the feds will gain him instant access to an FBI position) that one can almost feel sympathy for his plight. The climactic nighttime shootout is punctuated by surprising twists and turns in one-upmanship and beautifully directed by Reisz that make its ending completely unpredictable.

This is one of Nick Nolte’s finest film performances, a man of action who also takes the time to be introspective about his life and hopes for the future. Tuesday Weld’s Marge, a bookstore clerk who gets pulled into a situation not of her making or interest, offers a poignant study of a woman who could easily be lost to drugs. Michael Moriarty’s John, who states late in the film “I’ve waited my whole life to be a screw up,” gets his eyes opened wide in his initial foray into the dangers of drug smuggling and gives a fine performance. Anthony Zerbe is intensely single-minded as Agent Antheil, and Richard Masur, Ray Starkey, and Charles Haid offer such eccentric takes on their offbeat characters that they make them totally unforgettable. Gail Strickland has some early solid moments as the drug contact in Saigon, and Joaquin Martinez as Angel proves to be an angel indeed for Ray in the climactic sequences.

The film’s 1.85:1 theatrical aspect ratio is delivered in a 1080p transfer using the AVC codec. Apart from a few softer shots in the early part of the film, sharpness is very good, and color is mostly solid with some possible fading but with believable flesh tones. Black levels are really impressive during the evening sections of the climactic shootout. There are some specks here and there, but there is minimal damage to the element used for the transfer. The movie has been divided into 24 chapters.

The DTS-HD Master Audio 2.0 mono sound mix delivers the dialogue, sound effects, and Laurence Rosenthal’s background score and endless repetitions of the title song and other tunes from the era with surety. While there are no problems with age-related artifacts like hiss or crackle, the high fidelity of the sound elements seems a trifle underwhelming.

John Bloom Interview (16:20, HD): the film’s editor recalls his experiences with director Karel Reisz working on this film and others. He also offers high praise for the movie, mentions some of his favorite scenes and performances, and states his opinions on the film’s themes.

Six-Page Booklet: contains some color stills, original poster art on the back cover, and film historian Julie Kirgo’s effusive praise for the film in her highly readable essay.

Not garnering the same heaps of praise as its cohorts Coming Home and The Deer Hunter received in 1978, Who’ll Stop the Rain offers another important spoke in the wheel of post-Vietnam era-themed dramas of the 1970s. There are only 3,000 copies of this Blu-ray available. Those interested in purchasing it should go to either www.twilighttimemovies.com or www.screenarchives.com to see if product is still in stock. Information about the movie can also be found via Facebook at www.facebook.com/twilighttimemovies. 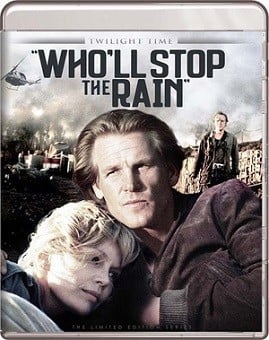