A man is found in the New Mexico desert, dead of an apparent suicide, along with $500,000 by Sherriff Ray Dolezal (Willem Dafoe). Ray traces the man back to a seedy motel, where he finds clues as to who the man was attempting to contact, but still no idea as to the man’s identity. Against his better judgment, Ray assumes the man’s identity, meeting up with two women in another seedy motel who steal the $500,000, leaving him tied up in his room. Two FBI agents (Samuel L. Jackson, Miguel Sandoval) arrive shortly thereafter, taking Ray into custody for allowing the money, which was supposed to be used by the FBI for a sting operation, to be taken. Ray convinces them to allow him to pose as Spencer (the man found dead in the desert) to try and retrieve the stolen money and take down suspected weapons trafficker Gorman Lennox (Mickey Rourke). Ray meets with Lennox and his associate Lane Bodine (Mary Elizabeth Mastrantonio), only to learn that the men selling the weapons to Lennox have now demanded an additional $250,000, for which Lane agrees to help raise the money for in exchange for a large finder’s fee.

White Sands is a rather absurd thriller, with so many implausible red herrings and coincidences to be very entertaining or even, dare I say, thrilling. That is a bit of a surprise, considering it was directed by Roger Donaldson (No Way Out) and written by Daniel Pyne (Doc Hollywood and several episodes of Miami Vice). The performances are superb, not only the leads Willem Dafoe, Mickey Rourke, and Mary Elizabeth Mastrantonio, but also supporting players Samuel L. Jackson (who looks similar to the way he does in Captain Marvel), M. Emmet Walsh as the possibly crooked coroner, and James Rebhorn as an FBI Internal Affairs agent. Maury Tierney has a small role, early in her career, but the character is yet another red herring that has little to do as a character and even less with the plot.

White Sands makes its Blu-ray debut courtesy of Sony’s MOD program through a licensing deal with rights holder Morgan Creek. That will giver you some idea that Sony very likely had little to no involvement in the transfer and/or print provided for this release. That being said, White Sands looks pretty good, but there is some evident drop off in image brightness along the right edge of the screen during the opening title sequence, and the print does show some wear here and there with very minor dirt accumulation. Overall, though, this is a pretty solid affair, with good detail in facial features and fabrics. Colors are accurate and consistent, although often appearing a bit subdued. Contrast and black levels are good with decent shadow details.

Although released theatrically in Dolby Stereo with matrixed surrounds, White Sands was remixed in 5.1 for its Warner DVD release in 2000, and Sony has included a DTS-HD Master Audio 5.1 track for the movie’s Blu-ray debut. It’s not an earth-rattling mix, but does open up dramatically when DTS Neural:X is enabled on your receiver when played back in a 5.1.2 configuration. Dialogue is clear and understandable throughout, music and sound effects are spread across the fronts, rears, and heights. The track does lack any punchy LFE, though.

Theatrical Trailer (480i; 1:48): The film’s trailer is all that is provided as a bonus feature on this disc.

I’m sure White Sands has its fans, and they would likely be pleased to finally have this film in high definition. 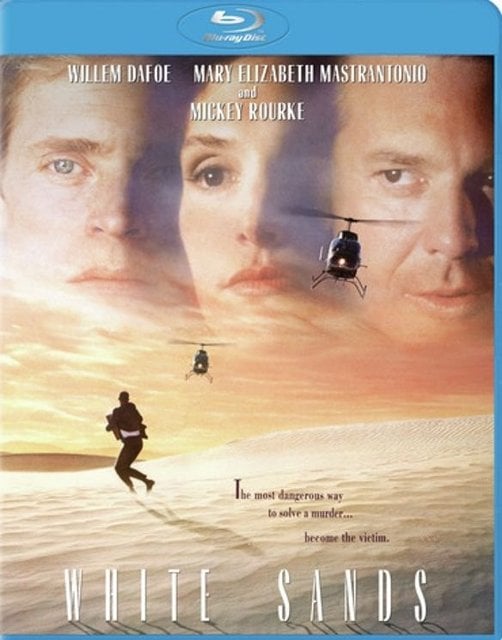