Now celebrating its 30th anniversary, When Harry Met Sally… is a wonderful romantic comedy which plays just as well today as it did in its original release. Everyone here works at the top of their game, and the film’s observations about the differences between men and women remain timeless.

When Harry Met Sally… is nearly the perfect romantic comedy. Everything about it just works. The script, by the late Nora Ephron, is a timeless confection of romance, comedy and friendship. The direction, by Rob Reiner, prioritizes character and plot over flash, though Reiner throws in a few complicated setups that work so well that it can be easy to miss the effort they took. Most of all, the casting is just perfect. Billy Crystal, as Harry, develops a screen persona here that would serve him tremendously well in other romantic comedies throughout the 1990s, combining his fast and anxious style of observational humor with a real sense of warmth. (Even when Crystal’s Harry comes off as obnoxious or insensitive, he remains likable.) Meg Ryan is a revelation as Sally, breaking out after a series of generally well-received but unmemorable performances that represented her work until that point. Ryan set the template not only for her stunning success in the 1990s, but for every actress since who has stepped into a romantic comedy. And while they have less screen time than the leads, Bruno Kirby and Carrie Fisher are perfection as Harry and Sally’s best friends.

The film works so well, then and now, because of its infinitely debatable, perhaps unresolvable central question, about whether men and women can truly be friends, especially when sex is in the mix. It’s remained equally endearing as an example of what happens when two people are perfect for each other, and everyone around them has come to that conclusion before they can realize it. As Harry and Sally meet, first as college graduates carpooling from Chicago to New York, they seem polar opposites, each alternating between bafflement and offense in response to each other. When their paths cross again several years later, they continue to rub each other wrong, and they part just as quickly as they’ve met. But when they meet again by chance several years after that, they start bonding over their recently failed relationships (in Harry’s case, a wife that cheated and then left, and in Sally’s, a boyfriend who couldn’t commit) and strike up a friendship. While Harry and Sally’s friendship grows, everyone around them realizes that they work perfectly together, but Harry and Sally are the last to notice.

Predictable as the story’s arc may be, it’s told well, and the dialogue is particularly noteworthy. Harry and Sally don’t sound like characters out of a Pulitzer Prize winning play or a 1930s screwball comedy; they sound like real people. Between Ephron’s well-written script and the pitch-perfect delivery from Crystal and Ryan, it’s easy to lose sight of the fact that these are actors playing roles and not just people finding their way through their lives. As a director, Reiner here is more focused on capturing the small moments and letting them develop organically. The best compliment that can be given to his work here is that the film is so well directed that it’s hard to notice that it was directed at all.

A quick note about what is perhaps the film’s most famous scene, when Sally fakes an orgasm in the middle of Katz’s Delicatessen to demonstrate to Harry that men can’t tell the difference. The scene famously ends with a diner at a nearby table (played by Reiner’s mother!) being asked for her order and responding with, “I’ll have what she’s having.” It’s a perfect end to a perfect scene. But as someone who has visited Katz’s, let me point out one thing: Sally is having a turkey sandwich, while Harry is eating a classic pastrami on rye. When it comes to love, have what Sally’s having; when it comes to lunch, I recommend Harry’s order.

When Harry Met Sally… is presented in its original theatrical aspect ratio of 1.85:1, in a new transfer derived from a 4K scan of the original camera negative. The film looks great, with excellent contrast, color and stability. Grain appears natural and accurate for the film’s period. There are some occasional speckles, mostly confined to the film’s first half hour or so, but they are not distracting and may go unnoticed entirely, especially on smaller and medium sized displays. Much like the recent new 4K masters that MGM has produced for other Billy Crystal titles like City Slickers (also from Shout) and The Princess Bride (from Criterion), this new edition offers a noticeable improvement in picture quality.

This disc provides two audio options, both in the lossless DTS-HD MA format: a 5.1 surround mix and a 2.0 stereo mix. Like other recent Shout releases, the 2.0 mix appears to be a stereo fold down of the 5.1 surround track, rather than the film’s original 2.0 audio mix. As such, the 5.1 is the preferred option here. While the film is mostly dialogue oriented and most activity is confined to the front soundstage, the track is well-recorded. Dialogue is always easy to discern, and the score from Marc Shaiman and songs from Harry Connick Jr. fill out the track nicely.

Scenes From A Friendship (44:34, HD) – New bonus feature. A conversation between Crystal and Reiner recorded for this release, this is probably the best feature on the disc. The two men have an easy rapport, and reflect candidly on their work on the film. (Crystal and Reiner pay tribute to the late Nora Ephron, and have lots of praise for Meg Ryan, but it is a shame that Ryan did not participate.)

Audio Commentary with Rob Reiner, Nora Ephron and Billy Crystal – This contains much of the same information that’s available on other features, but drags a little; while the participants clearly enjoy each other’s company, it’s more redundant than informative.

Audio Commentary with Rob Reiner – A pleasant if unmemorable track which is also somewhat redundant.

How Harry Met Sally (33:21, SD) – A making-of featurette featuring Reiner and Ephron interviewed separately. This appears to be older than the other featurettes included.

It All Started Like This (19:48, SD) – A conversation featuring Reiner and Ephron reminiscing together on the development of the film.

I Love New York (8:29, SD) – Cast and crew members reminisce on the importance of New York City to the film’s story and production.

So, Can Men And Women Really Be Friends? (7:54, SD) – Interviews with cast, crew and sex therapists address the film’s central question.

Deleted Scenes (7:24, SD) – Several deleted and extended scenes are presented together. While Reiner made the right call in cutting them, they are more enjoyable than film trims usually are.

Stories Of Love (5:10, SD) – A more detailed look at the couples interview segments which are intercut throughout the film.

When Rob Met Billy (3:56, SD) – Crystal and Reiner reminisce on their real-life friendship.

Music Video By Harry Connick Jr. (2:50, SD) – Connick’s video for “It Had To Be You” from the film’s original soundtrack.

Reversible Cover Art – One side includes Shout’s new cover design, while the other side includes the original theatrical poster design.

When Harry Met Sally…, arguably the definitive romantic comedy, is given a definitive disc release from Shout Select. This edition boasts a brand new 4K transfer derived from the original camera negative, resulting in the best the film has ever looked on video. The disc also includes a brand new lengthy retrospective conversation with director Rob Reiner and star Billy Crystal, as well as bonus material from previous releases. While the new interview contains most of the information that is available on the older bonus features, it is generally more enjoyable to hear it from Reiner and Crystal in casual conversation. Meg Ryan’s absence in both the new and older bonus material is conspicuous.

You've been a busy bee.
Reactions: PMF and Josh Steinberg
A

An all time favorite. I'm in for this.
Reactions: Josh Steinberg
J

I’ll pick this up for the new interview with Reiner and Crystal.
It’s a shame that Ryan isn’t there with them though. A terrific
RomCom.
Reactions: PMF and Josh Steinberg
You must log in or register to reply here. 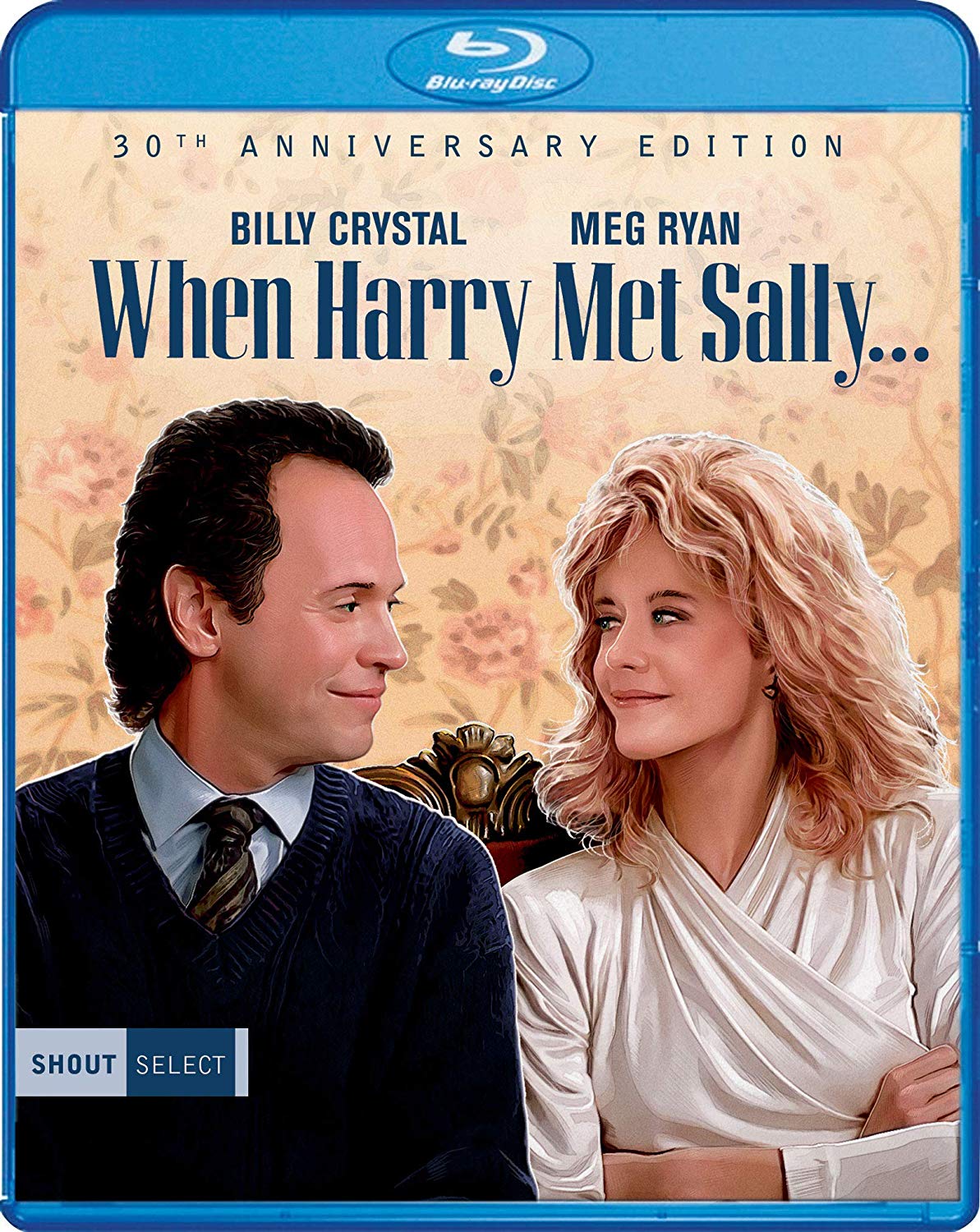