Forum List What's new Dark Style Change width
Log in Register
What's new Search
Menu
Log in
Register
Navigation
Install the app
More options
Dark Style
Close Menu
Posted on December 7, 2020 by Todd Gilchrist
You are using an out of date browser. It may not display this or other websites correctly.
You should upgrade or use an alternative browser.

First, the bad news: The Office officially leaves Netflix at the end of 2020 as NBC will make a permanent and exclusive home for this perennial ratings champ on its own streaming service, Peacock. For some of us that may be a good thing, forcing a break from those reruns that we’ve probably already watched too many times but can’t pass by when there’s just enough time at the end of the night for a single episode before bed. But there are lots of great new options coming to Netflix this month, including SVOD premieres, original programming and legacy titles. Even as streaming services continue to premiere, collecting and compiling and curating with increasing specificity, Netflix continues to deliver some of the best and broadest selections available anywhere through its ever-changing menu, guaranteeing that there will always be something for every moment and every appetite. Check out just a few of the films to focus on in the final weeks of 2020. 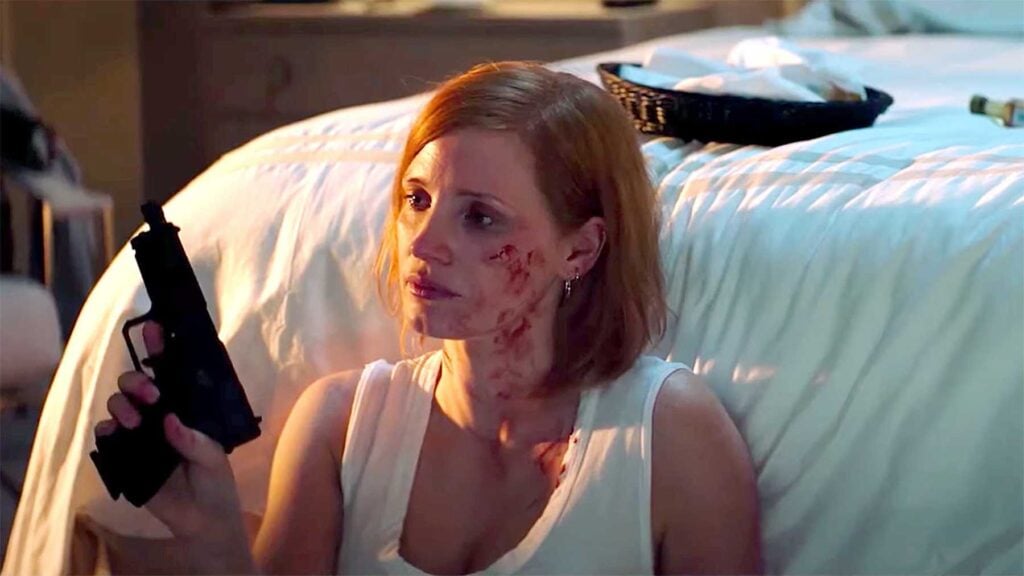 Reuniting with her The Help director Tate Taylor, Jessica Chastain plays the title character in this thriller about a female assassin who tries to reconcile with her estranged family but becomes a target herself after a hit goes wrong. Chastain leads a cast that includes John Malkovich, Geena Davis, Common, and Colin Farrell, but it’s her own extraordinary physicality in the role that steals the show as she commits to the challenges and choreography required to bring this tough-as-nails character to life. (12/7) 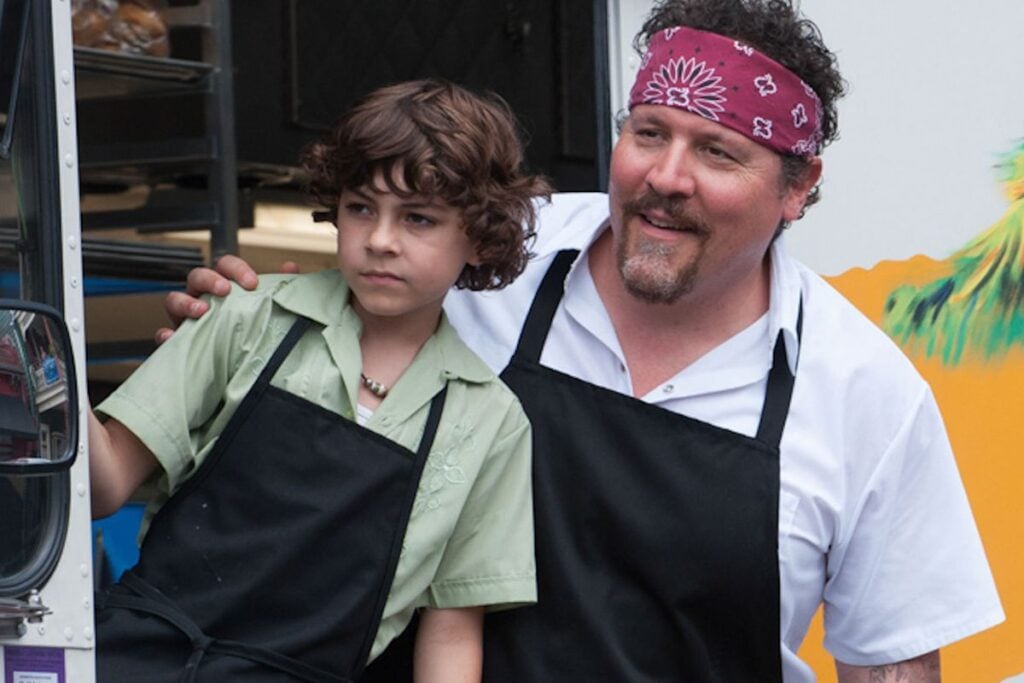 After directing the first two Iron Man movies, Jon Favreau went back to basics with this charming little movie about a disgraced chef who takes a pilgrimage across the country to reconnect with his son while starting a new DIY venture with a run-down food truck. Favreau tells a story that’s definitely light on conflict but proves to be rich in colorful characters, enlisting a superstar supporting cast that includes Sofia Vergara, John Leguizamo, Dustin Hoffman, Scarlett Johansson, Robert Downey Jr. and Oliver Platt. (12/1) 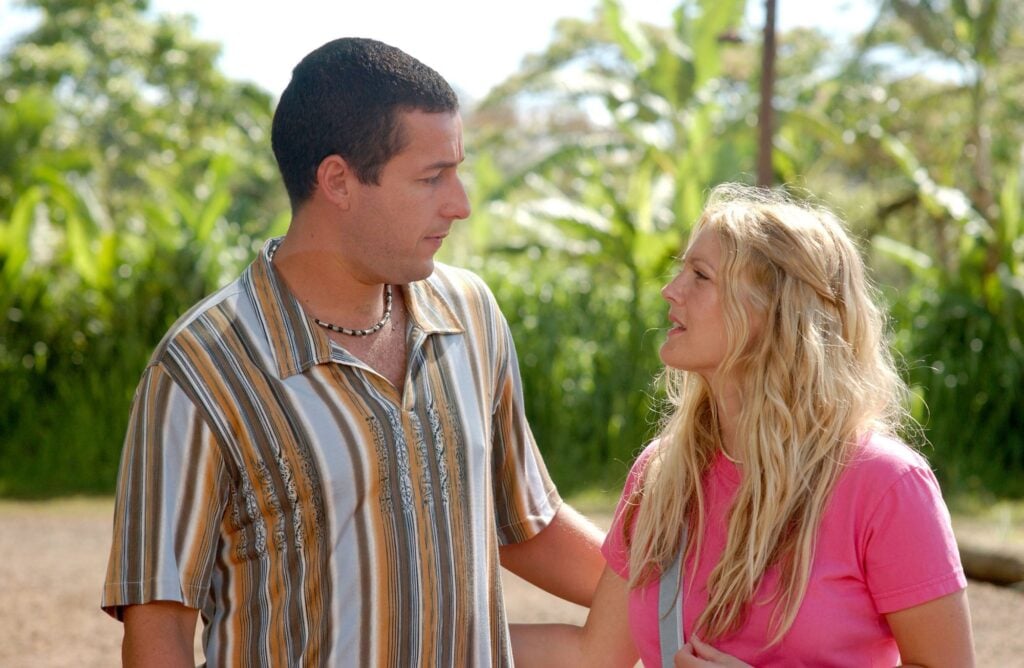 Adam Sandler’s creative relationship with Netflix has produced a real variety of material, some terrific and some less so. It’s no surprise that the service adds more of his older films, including this 2004 rom-com about a Hawaiian veterinarian who falls for a woman with a rare disorder that forces her to live every new day like it’s her first. If that’s not your cup of tea, they’re also adding the 2000 comedy Little Nicky, where Sandler plays the sweetheart son of the Devil (Harvey Keitel) who tries to prevent his brothers from taking over Earth. (12/1) 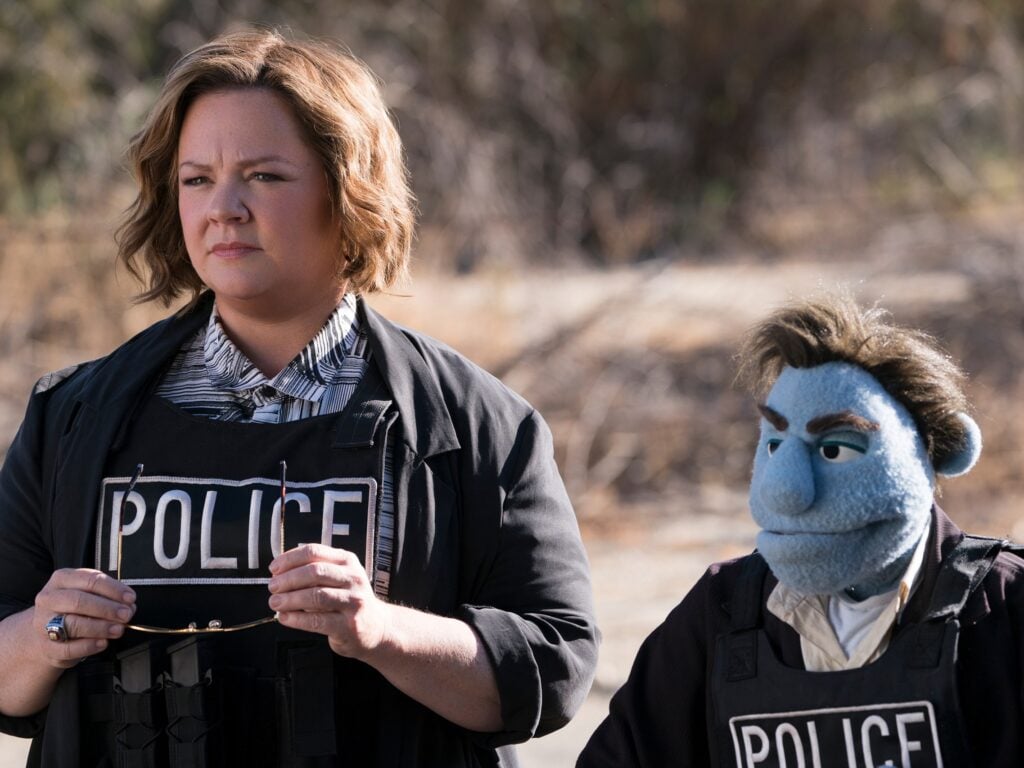 Brian (son of Jim) Henson directed this murder mystery set in a world occupied by humans and animated puppets. It’s decidedly more adult than The Muppets — if you ever wanted to see two puppets get truly intimate, look no further — but Melissa McCarthy anchors this in surprisingly effective reality as a human Detective who teams up with a puppet partner not only in search of clues about a heinous crime, but looking for a bit of redemption. It’s an unusual premise but Henson explores some interesting ideas. (12/1) 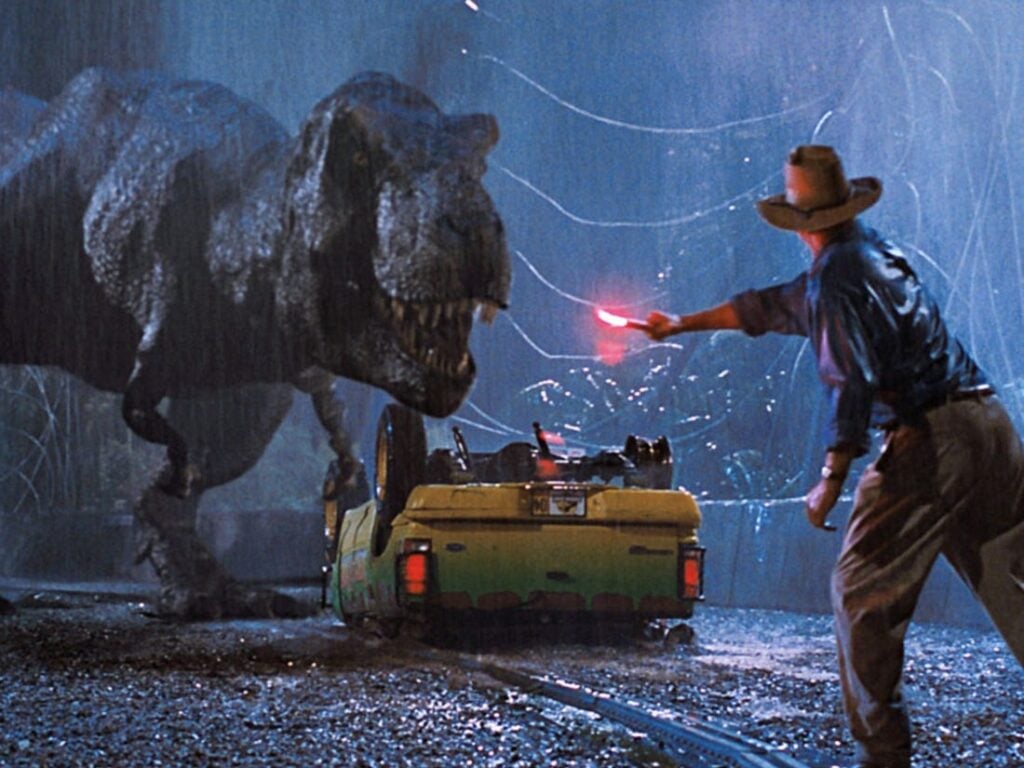 Spielberg’s movies come and go on Netflix with consistent regularity, but their appearances always remind fans why they’re such enduring, even timeless classics. This month, you can watch the first three Jurassic Park movies — for better or worse, without the two most recent ones — as a trilogy of terrific storytelling and groundbreaking visual effects. Spielberg delivers some top notch thrills with the first two while Joe Johnston takes over for Part III, offering a succinct and scary coda for an adventure 93 million years in the making. (12/1) 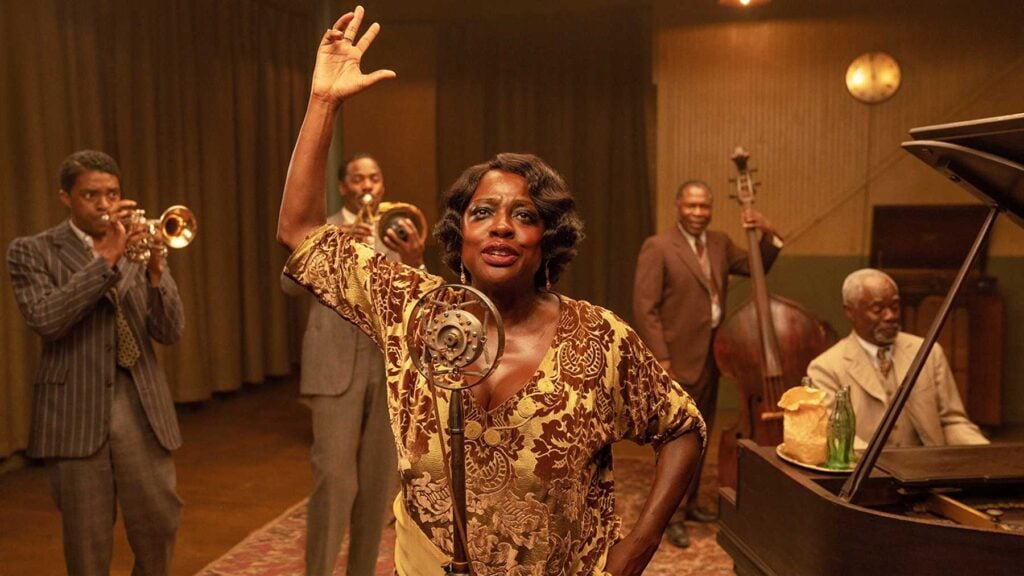 The loss of Chadwick Boseman leaves a gap in Hollywood that can never be replaced, but at least we have a tremendous final performance from the actor for audiences to help remember him. In this adaptation of the stage play of the same name, Boseman plays a hot headed young trumpet player whose ambitions outpace his common sense as he goes toe-to-toe with recording star Ma Rainey (a commanding Viola Davis) during a recording session in 1930s Chicago. To call the film an actor’s showcase would be an understatement, but extraordinary performances by Boseman, Davis and their costars make this an absolute must-watch at the end of the year. (12/18) 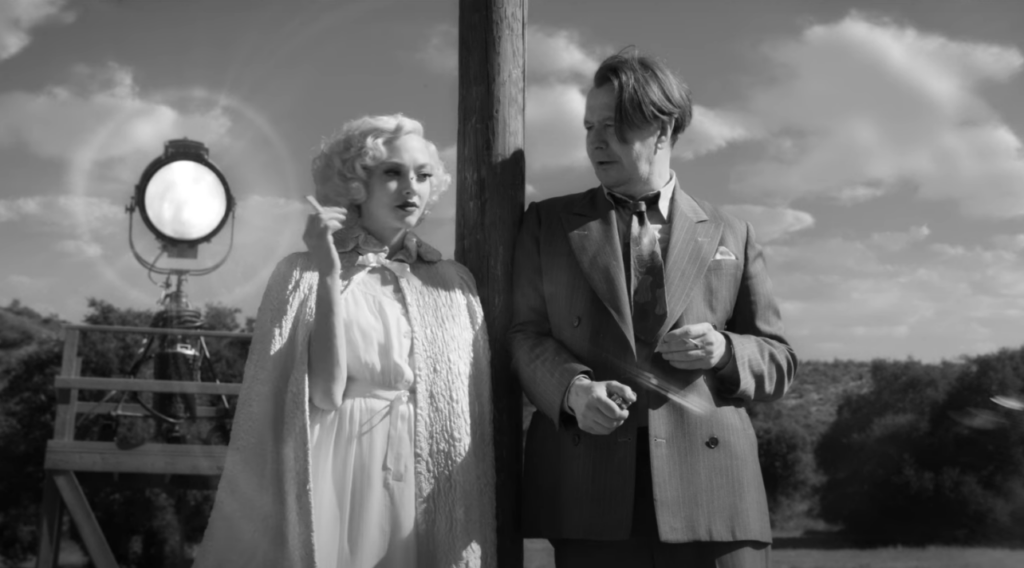 David Fincher is a cinephile’s filmmaker, and he’s finally made the ultimate cinephile’s film: working from a script by his late father, Fincher tells the story of Herman J. Mankiewicz (Gary Oldman), a washed-up screenwriter and raconteur who turned his relationship with media mogul William Randolph Hearst (Charles Dance) and Heart’s young lover (Amanda Seyfried) into the foundations of what would become the most acclaimed film ever made, Orson Welles’ Citizen Kane. Shot in black and white and full of too many easter eggs from Kane to count, Fincher pays tribute to the cinematic milestone and his father in one fell swoop, with fantastic performances from a cast led by the incomparable Oldman. (12/4) 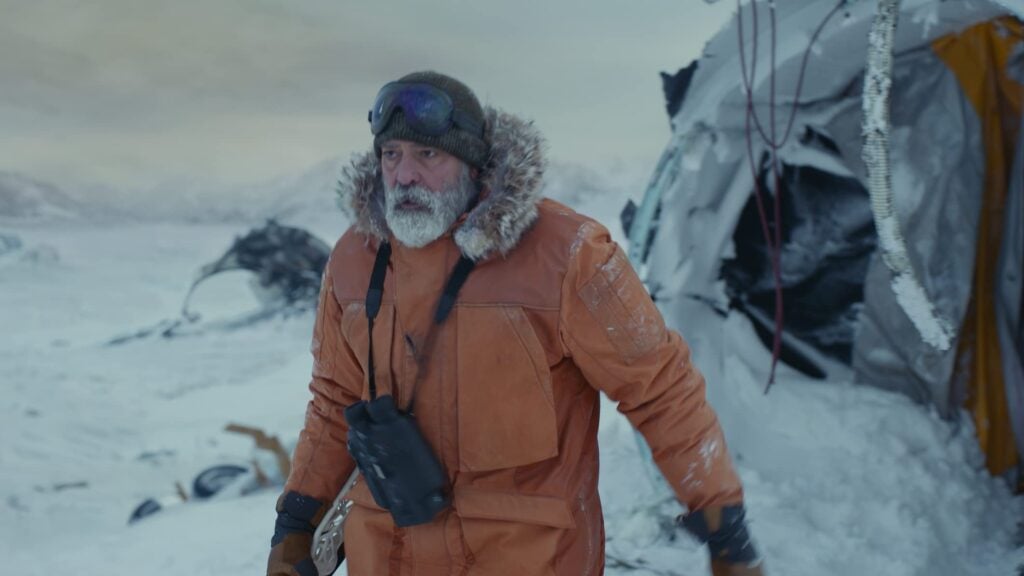 George Clooney’s directorial career has been full of unexpected surprises, and this latest film is guaranteed to catch audiences off guard: adapting the book Good Morning, Midnight, Clooney plays a lonely scientist in the Arctic who races to stop astronaut Sully Rembshire (Felicity Jones) and her team from returning to Earth as a mysterious global catastrophe erupts. The film’s subject matter feels perhaps unexpectedly timely, but with Clooney behind the camera and in front of it, sparring with the likes of Jones, David Oyelowo, Demian Bichir and Kyle Chandler, this is exactly the kind of nail-biting new adventure we need right now. (12/23) 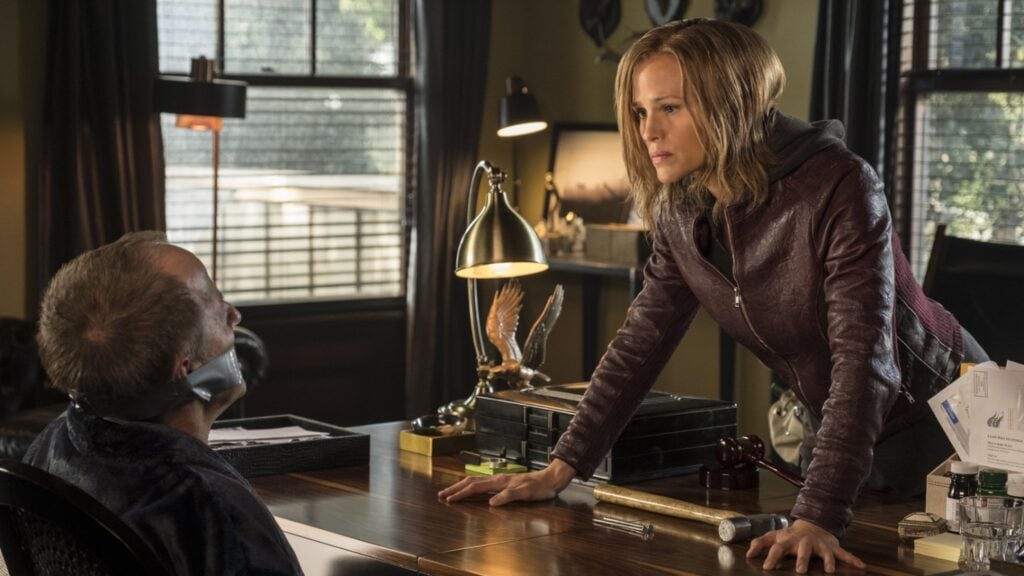 There are few other actresses than Jennifer Garner who better convey both intimidating toughness and the total vulnerability that their characters are hiding with it, and this film offers quite a showcase for both sides of that equation. Garner plays a woman who becomes a vigilante exacting revenge after gang members murder her husband and child. If nothing else, the way this film escalates into violence and recrimination must be watched to be believed, but Garner is unsurprisingly effective as a woman with a vendetta — so much so that it’s already become one of the top watched options this month. (12/1) 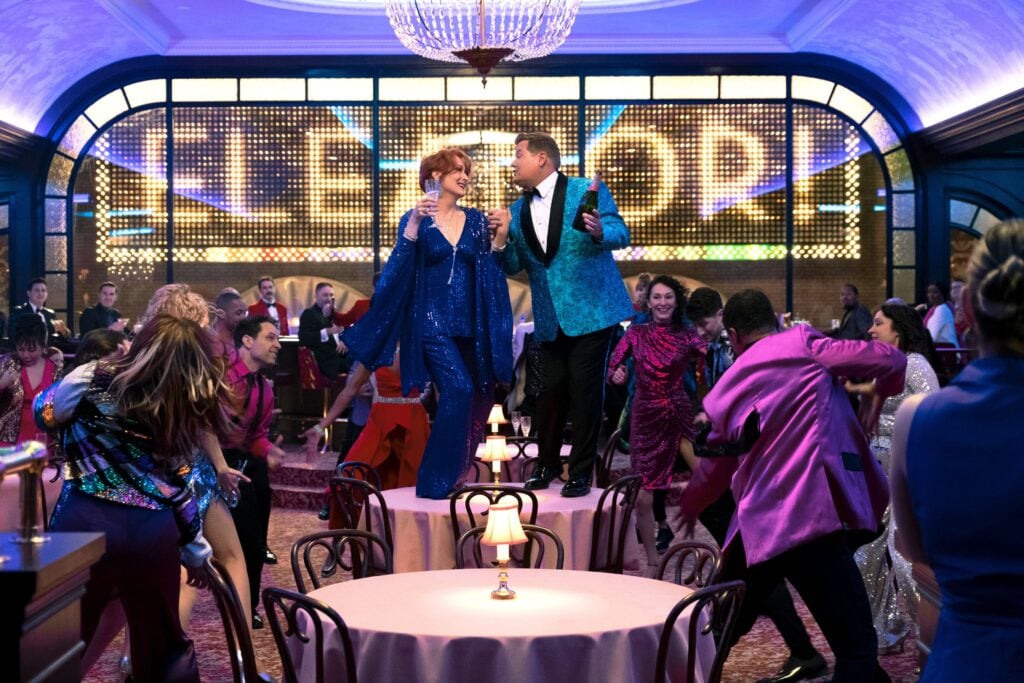 Ryan Murphy, the busiest man in show business, directed this musical comedy, an adaptation of the 2018 Broadway musical of the same name about a group of down-on-their-luck New York actors who decide to rally around a young Midwestern teenager whose high school refuses to let her attend the prom with her girlfriend. Hilarious disaster ensues, as does a whole lot of singing and dancing, by the likes of Meryl Streep, James Corden, Nicole Kidman, Keegan-Michael key, Andrew Rannells and Kerry Washington. Released Dec. 4 for a limited theatrical run, it premieres properly on Netflix on Dec. 11. 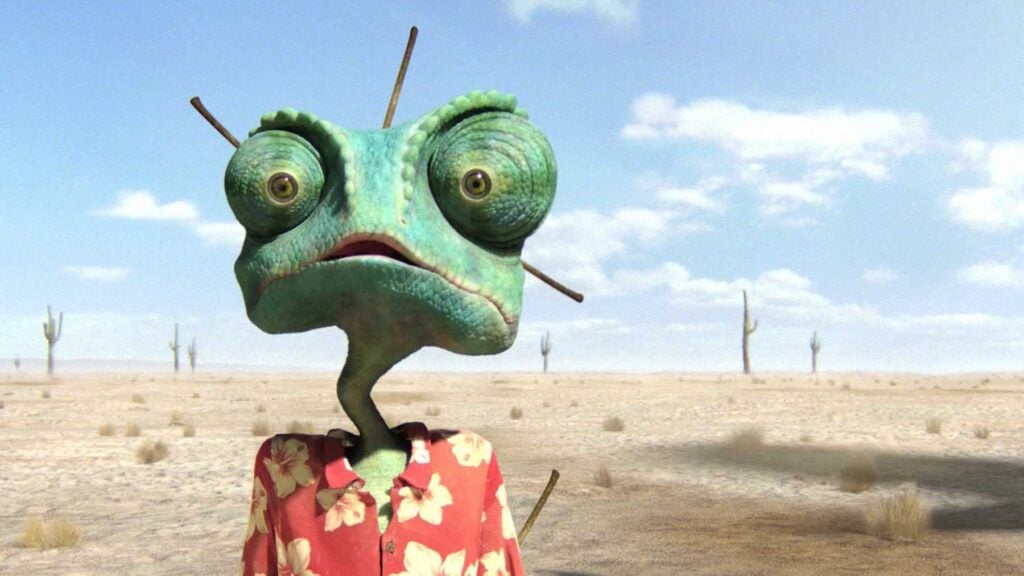 Gore Verbinski, director of the first three Pirates of the Caribbean films, reunited with his star Johnny Depp in 2011 for this animated adventure about a pet chameleon suffering from an identity crisis when he arrives at a dusty town in need of a new sheriff. Verbinski’s film won Best Animated Feature at the Oscars for its endlessly inventive animation and a story that ventures into weird, wild places that a lot of others will not, while Depp, Isla Fisher, Alfred Molina, Bill Nighy and Harry Dean Stanton bring these characters to life with unique, memorable voice performances. (12/28) 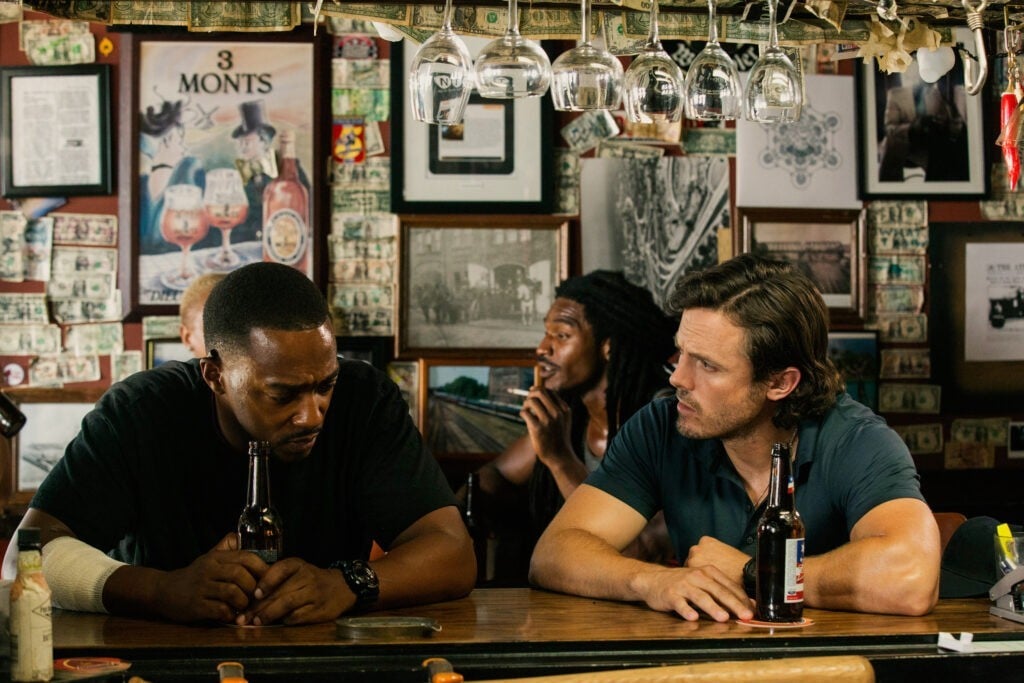 John Hillcoat (The Road) directs this crime thriller that boasts one of the most amazing casts you’ve ever seen assembled to tell a story with more twists and turns than you can count. Featuring Casey Affleck, Chiwetel Ejiofor, Anthony Mackie, Aaron Paul, Gal Gadot, Woody Harrelson and Kate Winslet, the film follows a group of criminals working with corrupt cops to stage heists, and the complications that ensue when the Russian mafia decides that their already complicated loyalty must be proven further by committing more crimes, and eventually, by betraying one another. (12/8)

I have seen Rango and it is fabulous. I highly recommend it. This is animation for adults. No, there’s no lizard nudity, the content is better suited to adults.
You must log in or register to reply here.