Forum List What's new Dark Style Change width
Log in Register
What's new Search
Menu
Log in
Register
Navigation
Install the app
More options
Dark Style
Close Menu
Posted on December 4, 2020 by Todd Erwin
You are using an out of date browser. It may not display this or other websites correctly.
You should upgrade or use an alternative browser.
A long, dull and bleak road to nowhere 3.5 Stars

Warner Bros. Home Entertainment brings the third season of the HBO series Westworld to 4K UHD Blu-ray with a very good transfer. I wish I could say the same about the season.

As the second season of Westworld came to a close, Dolores (Evan Rachel Wood) and Bernard (Jeffrey Wright) had escaped to the real world following the massacre at the island theme park, leaving viewers wondering what was in store for the third season. Dolores has made copies of herself in various different forms, taking on the identities of Charlotte Hale (Tessa Thompson) and several other fringe characters as she tries to mount a revolution against the humans. Apparently, the real world is not all that different from the theme park, as Delos’ main competitor, Incite, has created an AI known as Rehoboam that controls the world’s population by predicting and implementing the fates of its citizens. The head of Incite, Serac (Vincent Cassel), is maneuvering a takeover of Delos to insure Rehoboam’s success and obtain key technology Delos used in its hosts, with some assistance from acquired (?) host Maeve (Thandie Newton), who is on the hunt to take out Dolores. Dolores is able to get some assistance from a human, former military and current mercenary Caleb Nichols (Aaron Paul), and his involvement in this revolution is not really made clear until nearly the end of the season finale. Meanwhile, Bernard and park security head Ashley Stubbs (Luke Hemsworth) are also trying to track down Dolores for reasons again not clear to the viewer until the very end of the season. Delos executive William aka the Man in Black (Ed Harris) makes a few eventual appearances.

One of my many problems with the third season of Westworld was the pacing. There felt like a lot of padding in the story arc to draw it out to eight episodes, making this season feel more like a typical Netflix series (at least back when the revolutionary streaming service mandated a 10-episode season on shows like Daredevil and Jessica Jones). I also found the story structure even more confusing than previous seasons, not due to time shifts, but more due to the writers holding back on key plot points throughout the season. Then there is the story itself, an unfortunate victim of bad timing that is no one’s fault as no one could have predicted all that would happen in the world this past year, with the riots and eventual bleak look at the future making this season hard to watch after the fact.

This season of Westworld was for the most part shot on 35mm film and each episode completed as a 4K digital intermediate, despite airing on HBO in 1080i and available on-demand in 1080p. This 4K UHD Blu-ray release features a nice 2160p HEVC-encoded transfer that includes both Dolby Vision and HDR10 high dynamic range. There is a noticeable improvement in contrast, fine detail, and color control on the UHD discs when compared to the included Blu-ray editions. I did notice some minor color bleeding, especially red, in a few shots on the Blu-ray that are not evident on the UHD. Contrast is also better controlled on the UHD version, providing deeper blacks that retain distinct shadow details that often show up as crushed blacks on the Blu-ray, and much of this season takes place at night on city streets.

As was the case with the first and second season releases, only the UHD version contains a Dolby Atmos soundtrack that also includes a Dolby TrueHD 7.1 compatible core. The Blu-ray, unfortunately, contains a DTS-HD Master Audio 5.1 track that still sounds very good, but this is not typical of other Warner releases that have duplicated the Atmos track on both UHD and Blu-ray. The Dolby Atmos, when played back in a 5.1.2 configuration, offers a more pronounced low end while opening up the soundstage with additional height channels that allow for more precise placement of audio, such as flying drones and transport vehicles and various instruments in the shows’ score.

The special features can be found on both the UHD and Blu-ray editions.

Disc Three:
We Live in a Technocracy (1080p; 13:44): Showrunners Jonathan Nolan and Lisa Joy compare data mining and algorithms in today’s world to the “real” world of the series.

Digital Copy: An insert contains a code to redeem a digital copy in HDX on Vudu.

Bad timing, through no one’s fault, may have tainted my review somewhat as this third season of Westworld would ultimately mirror our current society a bit too closely shortly after it aired on HBO, but that’s no excuse for the slow timing and often convoluted writing.

Thank you for the review.

Loved the first season. The second, not so much, but I watched it all.

This third season? I watched the first (and possibly) second episode, turned it off, and decided this just wasn't worth watching any further.

Your review seems to indicate I didn't miss much.

I felt really let down by this season. I think your appraisal was spot on and I don’t think it would have played much differently in a different year. I feel like this show doesn’t know what it wants to be, and perhaps misunderstands why people were interested in the first place. For a show called “Westworld” we spent precious little time in that titular location. I wasn’t really enticed by their depiction of the world outside the theme park and so much of the season felt like retreads of concepts that have been better explored elsewhere and had already been beaten to death. And the central conceit of the season being about stopping an AI that otherwise has nothing to do with Westworld seemed like a reject plot from Nolan’s prior Person of Interest series.

This season neither explored the best of what made this show work in previous seasons, nor did it bring any new ideas to the table. Everything felt like “been there, done that.”

Ronald Epstein said:
Thank you for the review.

Loved the first season. The second, not so much, but I watched it all.

This third season? I watched the first (and possibly) second episode, turned it off, and decided this just wasn't worth watching any further.

Your review seems to indicate I didn't miss much.
Click to expand...

I am finding it harder and harder to watch movies and shows that mirror our current society, especially those with a bleak outlook.

For example, this season of NCIS: New Orleans has decided to set the show in the present world, showing how the detectives have to conduct themselves while facing a pandemic. The first two episodes dealt with the pandemic head-on, showing an overflowing morgue, overworked medical staff, families having to deal with lost bodies, with the main plot having to do with a ship carrying PPE supplies not being allowed to dock due to possibly infected crew members while conducting a murder investigation. The following episodes have lightened up on the pandemic somewhat, but the show still pushes (and rightfully so) the need to wear PPE and practice social distancing.

The Good Doctor was similar, in that its first two episodes of the season dealt with the pandemic and how it affected the staff of the hospital (and dedicating those two episodes to all who lost their lives and the front line workers who have to deal with it on a daily basis), but changed gears starting with the third episode, putting the pandemic aside and not making it part of the show's narrative after the series' star, Freddie Highmore, introducing that third episode by saying that the rest of the season takes place in a world post-pandemic, yet acknowledging that the pandemic is still an issue. It has made the show much easier to watch, and allowed the writers to go back to the lighter tone of the show.

When I sit down to watch a movie or TV show, it is usually to escape, even for a few hours, everything going on in the world today. I rarely turn on the news anymore, except to catch up on current events, and even that is often difficult to do.

Yeah this season is just an unfortunate mess. If HBO was hoping Westworld was going to turn into the next GOT, it seems like it is for all the wrong reasons.

I bought Season 3 during a sale on iTunes, and I agree with the consensus here that the season was a real mess. We only have watched about half the episodes, but neither my wife nor I are really pushing to finish the season. This was a real disappointment after the first two seasons. If the series comes back for a fourth year, I doubt that we will watch
You must log in or register to reply here. 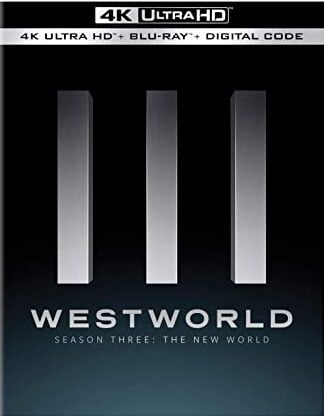