Forum List What's new Dark Style Change width
Log in Register
What's new Search
Menu
Log in
Register
Navigation
Install the app
More options
Dark Style
Close Menu
Posted on December 6, 2018 by Todd Erwin
You are using an out of date browser. It may not display this or other websites correctly.
You should upgrade or use an alternative browser.
Mesmerizing and confusing 4.5 Stars

Westworld Season Two: The Door picks up where the first season left off, but takes us on a more confusing yet mesmerizing journey that isn’t spelled out until the final episode.

At the end of the first season of HBO’s Westworld, Dr. Robert Ford (Anthony Hopkins) introduced a new storyline to the theme park at a grand gala event, cut short when host Dolores Abernathy (Evan Rachel Wood) assassinates Ford, giving the hosts of the park essentially free will, starting a bloodbath with hosts taking out guests. This, of course, was all part of Ford’s grand scheme. Season Two picks up as security teams from Delos arrive on the island, trying to take back control of the park in their own brutal assault against the hosts, led by Charlotte Hale (Tessa Thompson) and Karl Strand (Gustaf Skarsgård), attempting to keep the corporation’s dirty little secret under wraps. Much of the season is told from the perspective of Bernard (Jeffrey Wright), whose memories are a mess, often leading to confusion as to which timeline we are in, and that is one of my complaints with this season, something that is not entirely explained until the last half of the tenth episode, The Passenger. Dolores is on a mission (again, something not completely explained until the finale), partnering up with beau Teddy (James Marsden). Maeve (Thandie Newton) searches for her long-lost daughter from another lifetime. We learn more about the Man in Black (Ed Harris) as he continues his quest, thinking he is still playing a game being conducted by Ford. As a bonus and part of the journeys made by the characters, we get to visit some new worlds, particularly the Native American Ghost Nation and Shogun World, leading eventually to The Cradle – a virtual world where the hosts memories are stored.

As I mentioned above, I found the shifting timelines to be rather confusing for much of this season, more so than in the first, but some patience as I binged my way to the season finale almost made it all worthwhile. The series’ commentary on society and corporations may be a bit much for some, but I found them quite compelling.

Like the first season, Westworld was shot on 35mm film and completed as a 2K digital intermediate. Warner’s 2160p transfers on this set have been graded using both HDR10 and Dolby Vision high dynamic range. There is a noticeable improvement in contrast, fine detail, and color control on the UHD discs when compared to the included Blu-ray editions. I did notice some minor color bleeding, especially red, in a few shots on the Blu-ray that are not evident on the UHD. The rock formations and layers of colors in the cliffs are much more pronounced, as are the clouds back lit by the setting sun behind the actors. Contrast is also better controlled on the UHD version, providing deeper blacks that retain distinct shadow details that often show up as crushed blacks on the Blu-ray.

As was the case with the first season’s release, only the UHD version contains a Dolby Atmos soundtrack that also includes a Dolby TrueHD 7.1 compatible core. The Blu-ray, unfortunately, contains a DTS-HD Master Audio 5.1 track that still sounds very good, but this is not typical of other Warner releases that have duplicated the Atmos track on both UHD and Blu-ray. The Dolby Atmos, when played back in a 5.1.2 configuration, offers a more pronounced low end while opening up the soundstage with additional height channels that allow for more precise placement of audio, such as snapping twigs or gun clicks and various instruments in the shows’ score.

Warner has decided to use similar packaging on this release as they have on more recent releases of Game of Thrones, using digipak that requires you to remove the top disc in order to get to the lower disc, and there is no pocket to hold the booklet insert. Special features can be found on disc three of either the UHD or Blu-ray edition.

The Truth Behind Delos (1080p; 12:40): The cast and crew discuss what Delos’ underlying motive is behind the theme park.

The Violent Delights Have Violent Ends (1080p; 11:11): The cast and crew discuss the use of violence in season two.

Bring Yourself Back Online: Of Love and Shogun (1080p; 15:19): Another roundtable discussion led by Leonardo Nam and Ptolemy Slocum, as Thandie Newton, Simon Quartermanm and Rodrigo Santoro discuss love and their characters’ journey through Shogun World.

Bring Yourself Back Online: Journeys and Technology (1080p; 15:19): Luke Hemsworth, Ben Barnes, Angela Sarafyan, Leonardo Nam and Ptolemy Slocum discuss in a roundtable setting how the themes in season two relate to our own world.

Creating Westworld’s Reality: The Drone Hosts (1080p; 3:23): Series creators Jonathan Nolan and Lisa Joy discuss the Drone Hosts and take a behind the scenes look at their creation.

Creating Westworld’s Reality: The Delos Experiment (1080p; 5:59): A behind the scenes look at the episode The Riddle of the Sphinx.

Creating Westworld’s Reality: Inside the Cradle (1080p; 4:47): Jonathan Nolan and Jeffrey Wright discuss the technology behind The Cradle.

Creating Westworld’s Reality: Chaos in the Mesa (1080p; 5:28): Cast and crew discuss the various shootouts in the Westworld control center.

The Buzz: On the Red Carpet (1080p; 0:55): Available as a digital extra on Vudu, the cast and crew are interviewed on the red carpet at the Hollywood Premiere of season two.

Return to Westworld (1080p; 3:47): Available as a digital extra on Vudu, the cast and crew discuss returning for a second season.

Digital Copy: An insert contains a code to redeem a digital copy of all ten episodes for season two on Vudu.

The second season of Westworld is a mesmerizing but often confusing journey as the hosts take control of the theme park. 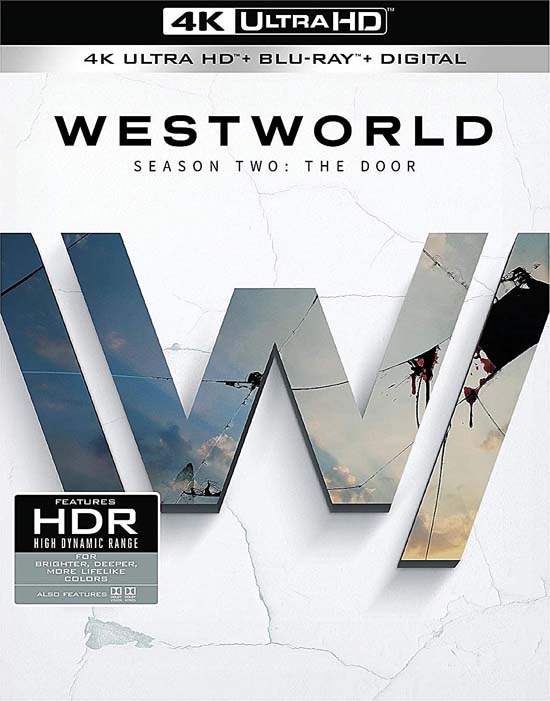