Posted on April 8, 2019 by Todd Erwin
Disappointing effort by a master storyteller 3.5 Stars

Welcome to Marwen is on one hand, a technical marvel in performance capture, and on the other a disjointed and disappointing story that feels rather empty.

Mark Hogancamp (Steve Carell) was an illustrator and sketch artist, but after a brutal attack left him amnesiac and close to death, he lost the ability to draw or write, and instead took up still photography, snapping pictures of dolls that were enacting a fantasy world of a fictional town in Belgium, Marwen, circa Wolrd War II. Inhabiting the town of Marwen are Cap’n Hogie (Carell), Anna (Gwendolyn Christie), Julie (Janelle Monae), Carlala (Eiza Gonzalez), Roberta (Merritt Wever), and Suzette (Leslie Zemeckis). The town is constantly under attack by a group of Nazis who want to kill Cap’n Hogie, and while the good captain usually keeps the girls safe, it is the girls that often come to the captain’s aide, although the Belgian witch of Marwen, Deja Thoris (Diane Kruger), often complicates matters by resurrecting the Nazis and assisting the Nazis in taking out any of the women who come to close to the captain. All of these fantasy sequences are created using performance capture, with all of the characters appearing as dolls (of the Ken and Barbie type) with the actor’s eyes and mouth seamlessly blended in to the CG performances.

Mark uses these fantasies and his photos as a way to cope with the PTSD he suffers from, and the photos have become so successful that an art gallery in the city has arranged to exhibit his work. But Mark does not want to attend, nor does he want to attend the sentencing hearing of the neo-Nazis who brutally attacked him. He’d prefer to stage his photos and purchase new dolls and props from hobby store sales person Roberta, help out at the town pub cleaning up or making meatballs with the Carlala the cook, keeping himself medicated by the bright green painkillers prescribed by his doctor and delivered by his caretaker Anna. This all begins to change, though, when Nicol (Leslie Mann) moves into the house across the street, prompting Mark to purchase a red-headed doll that shares a likeness with his new neighbor. As he and Nicol become friends in the real world, Cap’n Hogie and Nicol fall in love and eventually become married in Marwen. Mark begins to get some confidence, until Nicol’s abusive ex-boyfriend Kurt (Neil Jackson) shows up to bully him, Mark misinterprets Nicol’s signals, and a Nazi doll shows up resembling Kurt, sending Mark into a full-blown PTSD attack and seeking isolation in his house, cowering on the eve of his court appearance. Roberta helps Mark pick up the pieces while he finishes his fantasy storyline in Marwen, eventually finding the strength to stand up to his bullies at their sentencing and arrive at his photo exhibit with Roberta.

Welcome to Marwen is based on the documentary film Marwencol, which told many of the events in this film, minus the fantastical elements, of course. Steve Carell gives a good performance as Mark, but the screenplay by director Robert Zemeckis (Back to the Future, The Walk) and co-writer Caroline Thompson (The Nightmare Before Christmas, Black Beauty) falters with its juxtapositions between the real world and Mark’s Marwen fantasy one. Marwen is often too fantastical (although the visual effects, as one would expect in a Zemeckis film, are superb), often distancing the viewer from the trauma Mark is trying to push himself through. The female characters, especially Nicol, are underwritten (although Roberta is possibly the strongest of the female characters), and Kurt feels like his only purpose is to taunt and help trigger Mark’s PTSD event. There is also a great deal of obvious foreshadowing, allowing the audience to clearly see where things are heading long in advance (what Deja Thoris represents is dictated way too early on). I really wanted to like Welcome to Marwen, and although I thought the technical achievements of the world of Marwen were breakthroughs in performance capture, the movie itself was the complete opposite, quite possibly being one of Robert Zemeckis’ biggest disappointments.

Welcome to Marwen was captured at up to 6.5K resolution on ARRI Alexa 65 cameras, but IMDB is rather ambiguous as to what resolution the digital intermediate was rendered at. Regardless, Universal has opted, at least for the time being, to release the movie on Blu-ray, forgoing a 4K UHD Blu-ray release (although the movie can be purchased in UHD from many digital retailers such as Vudu and iTunes). This is one of the best looking Blu-ray discs I’ve seen in quite some time, with the AVC-encoded 1080p transfer retaining the film’s intended theatrical aspect ratio of 2.39:1. The movie is rich in detail, from the blades of grass in Marwen standing in for the thick brush of Belgium (?) to the weathered, wrinkled, and scarred face of Mark to the intricate seams in the dolls’ clothing. Colors are natural and well-saturated. Black levels are near perfect, with no visible crushing.

I was surprised that Welcome to Marwen had only a Dolby TrueHD 5.1 track as its main selection, with no Dolby Atmos (frankly, I found it odd for the 5.1 track to be TrueHD and not DTS-HD MA), but in researching, apparently the movie was released theatrically with only a 5.1 soundtrack. That being said, the 5.1 track is a lively one, with great use of surrounds and deep LFE, especially during the many sequences where Marwen is under Nazi attack. Robert Palmer’s Addicted to Love also makes good use of pulsing LFE during its brief appearance when the women save Hogie. Dialogue is clear and understandable throughout.

A Visionary Director (1080p; 4:53): Several key members of the cast and crew talk up how great it was to work with Robert Zemeckis.

DVD Copy: The movie in 480p with Dolby Digital 5.1 audio and all of the special features noted above.

Digital Copy: An insert contains a code to redeem a digital copy  on Movies Anywhere plus a free additional movie at UPHE Rewards website.

I have been a long-time fan of director Robert Zemeckis, and was deeply disappointed with Welcome to Marwen. Universal’s presentation on Blu-ray is excellent. 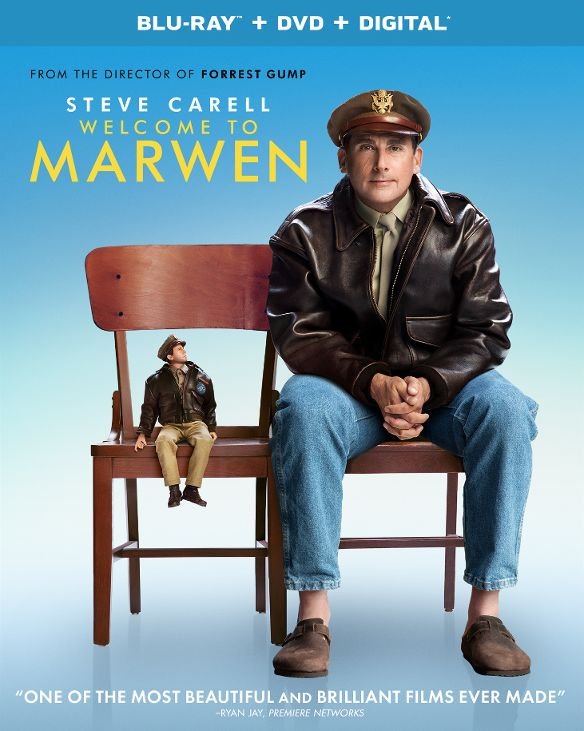